Footprints in the Snow

Yesterday we played "footprints in the snow." We read The Tomten, which really seemed to resonate with Natalie. It is a simple book, the only plot being that the tomten goes around the farm and checks on all the animals and people. But she was completely entranced and when it was done she leaned her head against me and said quietly, "I love that book." I set up our farm scene (from The Turnip) to a winter scene with a snowflake silk, the farmhouse, a pine cone "tree" and the little tomten outside. My follow-up idea to the story was to do our footprints, since all through the book she is saying that no one has ever seen the tomten, you only ever see his footprints. I laid out an old shower curtain liner that I was about to dispose of on the hallway floor outside the bathroom. I tore open a 5 lb. bag of flour ($1.64 on clearance at the grocery store) and spread it all around, then I let the children walk in it. They had an absolutely marvelous time! After doing footprints, they played a game where they took turns sitting cross legged (in underwear only -- clothes came off pretty quickly once they began digging in the flour pile) and filling each other's laps up with flour. I can only imagine how fantastic that felt. Flour is so incredibly soft. After playing and playing, I scooped them up and into the bathtub, then folded up the shower curtain liner with the flour inside and carried it to the trash. A little Swiffering on the wood floor and it was all cleaned up. Pretty easy, really, and super super fun.

Yesterday morning I also ended up taking Leah and Rebecca to FunFit with me, due to a babysitting problem, so that was part of their "school" as well.

Today Natalie stayed home from school because she threw up all over the car, repeatedly, on the drive in to kindergarten this morning. We'll be reading The Tomten and the Fox but probably not doing much with it. Monday's watercolor paintings turned out beautifully -- I had the girls paint a yellow moon and then fill the paper up with blue all around it. Rebecca followed the directions to a T and didn't mix her colors, but Leah sloshed her blue and yellow all around and made a green painting. They both loved the story.

Tomorrow is The Little Red Hen so I'll be making finger puppets (from Feltcraft) all evening, as well as sewing up the felt whale from S.S. Our lesson on Sunday was fantastic! I took in 11 books with whale pictures in them as well as a book for the lesson -- The Drop in My Drink: The Story of Water on our Planet by Meredith Hooper. You couldn't do this book with a bunch of Young Earth creationists BTW but it was okay for our church. It talks about how old the earth is (and that water is even older) and goes throughout time. The illustrations are amazing and show the earth being formed, cooling, the smallest organisms evolving, dinosaurs, and so on into present time. The idea is that all the water we have is all the water we've ever had and it follows one drop in your cup of water (we all had a cup of water to drink during the story) through the sky, down into a river, through the pipes, and into your tap. The drop in my drink, it goes on to say, has carved rocks, traveled around the world in the jet stream, been inside an Egyptian princess and Tyrannosaurus rex.... When I finished reading it my students, who had been restless at first because they already knew about the water cycle but then sat quietly and listened, said, "it really makes you think about water in a different way." Which it does. And then we talked about how the water in our glass might have actually been there when the whale swallowed Jonah... and then we created our whale shape using the flat pieces we felted the previous week and our collection of whale books to guide us. 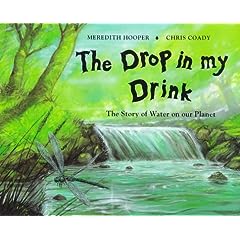