We did a great lesson yesterday on patterns, beginning with a new discovery of mine, Pattern Fish

by Trudy Harris (a classroom teacher). 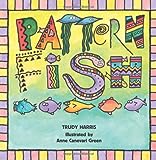 First I read the book. Then I showed the children how each pattern in the dialogue matched the pattern in the border around the page, as well as the decoration on the fish, and other elements in the illustration. We talked about how letters are used to convey the pattern (ab ab or abcd abcd or ababcc ababcc). A pattern must have two things. It must have a rule and it must repeat. For example, I acted out touching my nose, hitting my knee, and sitting down on the floor. Have I created a pattern? No. But if I repeat those exact same movements in that exact same order, then I have created a pattern.

Next, whole body. I invited students to think of a pattern that they could act out with their bodies, similar to my example. They came up to the front of the room to demonstrate. If you make your initial series of movements too lengthy and complicated, then you get lost when it comes time to do the repeat -- a good review of the elements that make up a pattern. Rule and Repeat. As each student demonstrated their patterns with their bodies, I would help them identify how to write it in pattern notation: abccb abccb, etc. The children also noticed patterns in their clothing. One child had two different patterns of stripes on his shirt, one the front of his shirt and another on the back. What a perfect shirt to wear on that day!

One child also pointed out that the Macarena is a pattern -- a long and complicated one. Great observation.

Next, colors. I passed out large square (1 inch) graph paper and had the students use their colored pencils to color in squares according to a pattern. They had to write the pattern below. For example, for a pattern of alternating red and green squares (ab ab), every square colored red would have a written below it, every square colored green would have b written below it. They were to create the pattern and repeat it twice more, then trade papers with a friend and let the friend continue their pattern.

Next, pasta shapes. The next challenge was to identify and extend a pattern where the rule was not given. I provided the children with seven trays of pasta shapes (wagon wheels, ditalini, rigatoni, penne, macaroni, etc -- the shapes must have a hole in the center for stringing) which meant that their design could not go past the letter g. The children used their string to string the pasta in a set pattern and then give it to a friend to identify and continue the pattern. Many children ended up wearing their pasta patterns home as necklaces.

As I added this newest book to our library collection, I happened to glance in the front of it to see the Dewey Decimal number. I figured it would be in the 500s as a Mathematics book. I was surprised to see it was 152. When I looked up 152 in our Dewey Decimal binder, guess what I found out? The topic for that number is "Perception." A pattern doesn't come into being until some perceives it. It's also not possible to continue it without being able to recognize what the rule is. Fascinating.
Posted by Renee at 9:46 PM