We are just finishing up our study of the Great Artist for November: Edgar Degas.

First, we used some of the "Newspaper Figures" exercises from Puppets, Jumping Jacks and Other Paper People

to explore proportion and we looked at some examples of Degas' artwork and talked about his interest in the human figure.

We followed those explorations with three distinct art activities. The first was "A Dancer and Her Shadow" from Using Art to Create Art 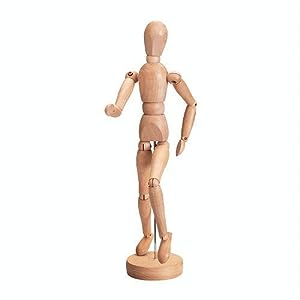 We talked about how Degas' interest in dancers meant that he had to try to capture movement on paper. By turning off the classroom lights and holding the flashlight behind the figure, I cast a variety of shadows on the floor. We laid down a sheet of white paper in front of the mannequin so we could better see the shadow, then the students realized that as I moved the flashlight the shadows would change, sometimes growing larger, so we ended up laying out many sheets of white paper. The children observed how the shadow changed as the light source moved up and down, got farther and closer, and went from side to side. They especially were delighted to discover that as the flashlight went left, the shadow went right, and vice versa. We used the mannekin to talk about the joints of the human body and then I allowed the students to pose to some music. I put them in partners and one was to sketch while the other froze in position as a model; then the two partners switched places.

The next day we looked at another way of portraying movement on paper -- the "Resist in Motion" activity on page 40 of MaryAnn Kohl's Discovering Great Artists: Hands-On Art for Children in the Styles of the Great Masters

We used 110 lb cardstock to make the stencils, Stockmar stick beeswax crayons for the tracings, placed the watercolor paper on our art trays, and then used the Stockmar watercolor paints for the wash. They turned out to be quite lovely. For the children who had trouble sketching something, I provided some cookie cutters to use as templates. One girl did the Gingerbread Man running away!

Finally, I talked with the children about Degas' spirit of experimentation. We talked about the Impressionist movement. Then we did an art project I had never seen or heard of before; they are drying now. It's the "Chalk on Cloth" activity (also by MA Kohl, in her Degas section of the book). For this you need squares of cloth with a rough weave so we cut a strip off the edge of heavy canvas tarp. It worked perfectly. It's hard to get the canvas to absorb the milk, though, so I spent a good amount of time pushing and kneading the canvas into the milk. Next time a large deep rectangular dish instead of a mixing bowl. I had figured it would act like other fabric and just soak up the milk. It was worth it to have my hands in all that cold milk, though, because the children were so excited to try this activity. Several notes:

Put the child's initials in the corner of the cloth with Sharpie before soaking it.

I used about a quart of milk for 15 squares of canvas, soaked for 15 min.

We have a limited number of chalk pastels so I placed a box in each corner and had the children break into four groups.

It says to work quickly but we spent about 15 minutes and they were still wet so don't panic. It still helps to have them plan what they want to draw in advance though.

We laid the wet canvas on our art trays before using the pastels; afterwards, each child helped his/her neighbor by having them lift up the wet artwork, laying down a large sheet of scrap paper, and the flipping the artwork for ironing.

I had them stack the art trays with the wet upside-down artwork and then I had a little ironing pile to work on. I ironed when they were still wet but the directions don't specify.

DON'T cover the iron with aluminum foil. Cover the artwork instead. The alum. foil kept tearing off the iron as I moved it. You make a sandwich -- thick newspaper stack on the bottom (because it will soak through), scrap paper, wet canvas, aluminum foil on top. Then iron.

Wendy Libby's book has plenty more ideas for Degas but we don't have time to do them all; we are moving on to Vincent Van Gogh!
Posted by Renee at 4:00 PM