If you're doing Fables with the addition of Drama & Puppetry, it's also fun to add some Improv Games in there! We usually do Improv Games in December as part of our Class Play work. Here are some of my favorites:

In Columns, an Improv Game that Natalie taught me when she was in high school, two volunteers from the audience stand still the whole time as the "columns" on either side of the stage. Then two actors begin to improvise a scene. During the scene the actors will sometimes leave a word blank and instead tap on a "column" who spontaneously gives a word to complete the sentence. The actors have to roll with the added word, no matter what.


In Don't Push the Red Button, another classic Improv Game, one person controls another person with the use of an "Improv Remote Control." This can be imaginary but I sewed one because it's so much fun!

Player 1, the person pushing the buttons, does not know what Player 2, the person being controlled, is going to do for any of the buttons. You start at the bottom with the brown button. Player 1 says, "I wonder what happens when I push the brown button?" Player 2 says something like, "That's the hopping button [and begins to hop]. But, whatever you do, don't push the red button!" The audience often joins in with chanting the warning!

Keep working your way up the remote until you get to the dreaded red button. It can be anything dramatic and silly, but no one should know (including the actor improvising) until the second the button is pushed. 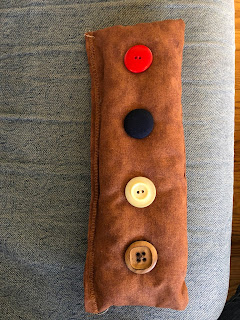 the Improv Remote Control for "Don't Push the Red Button"
Posted by Renee at 10:36 AM