Today we finished up Norse Mythology I, the first half of our Norse Mythology block. Students absolutely loved the story of Odin’s Eight-Legged Steed and the idea of Loki being pregnant had some of them giggling non-stop. We were inspired by the illustration Leah created for her MLB when she did this subject years ago, and which solves the problem of trying to draw an eight-legged horse! (Although needle felting an eight-legged horse would probably be really fun, and I think creating the pipe cleaner frame would be an interesting challenge!)

You can always see the difference in a summary where children loved the story, just like you can feel the difference in the classroom when the teacher tells — and enjoys — the story instead of simply reading it aloud. Here’s one example of a summary created today by one of my oldest students. He was very proud of it and asked me to publish it:

One day Asgard’s wall of gold and silver was failing. The Aesir knew that they had to build it of stone and they did not want to because it was such a heavy gloomy material. Luckily, a stone mason came along and offered to help them. They accepted and asked what his price was and the mason said he wanted Freya, the sun, and the moon! The Aesir were outraged. They would not give Freya, the sun, and the moon to the mason. But then Loki had an idea. He said in a whisper to the Aesir, “Say he can have it if he finishes before Spring,” and the Aesir and the mason agreed on those terms. But then the mason was almost done and had plenty of time left, so Loki turned into a mare and distracted the mason’s horse. This delayed the mason and he ran out of time and got nothing for all of his hard work. While the horse was chasing Loki he got pregnant and had an eight-legged baby horse!

Here are my notes from our final week of this block.

Week Three, Day One
For those students who had been absent for the snow/ice storm, we took some time to finish adding Loki, the Mischief-Maker to the MLB.

Note: My students already knew about Odin and Mimir from our previous story so I only read them the information about the hostages which the Vanir gave to the Aesir.

Then I had each student choose a person we had just heard about and start to draft an acrostic poem.

Week Three, Day Two
We reviewed the figures from the previous day (Balder, Heimdall, Njord, Frey, and Freya) and added the acrostic poems and illustrations to the MLB. Next, it was time to hear hear chapter 14 (Bragi, God of Poetry). I had the students each paint or draw the outline of a cauldron on the next blank page of their main lesson book, and spatter paint drops of paint (wire screen, old toothbrush) inside the cauldron to be the drops of spittle / mead.

Week Three, Day Three
Happily, we were able in this week to visit a local art museum and listen to a harp performance (and our harpist allowed the students to touch the strings afterwards). This was perfect timing for Bragi's story! We then drafted the summaries of Bragi, God of Poetry for the main lesson books, and I had the students write their summary in the MLB, either on the spatter painted background inside the kettle or around the outside edge of the kettle.

For our final story of Block I, we heard Odin’s Eight-Legged Steed.

Week Three, Day Four
We reviewed the story of Odin's Eight-Legged Steed and I had the students either draw a stone wall around Asgard or create a border in their MLBs of cut construction paper blocks. Inside this stone wall border, they added Odin’s Eight-Legged Steed to the MLB. In March we will pick up where we left off, and continue on to the rest of the D'Aulaire's book with Norse Mythology II. As always, all of my plans and the links to all of our activities are documented on my website.

The spatter painted mead-spittle-kettle illustration and the construction-paper-block stone wall around Asgard are both ideas which my daughter Leah originally had when she did this MLB several years ago (she was in sixth grade, which is why her summaries are longer than your typical fourth grader). I loved her creative ideas! See all of the photos of her MLB here. 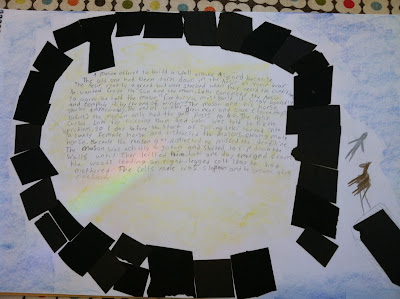 click to enlarge; you will also see that a rainbow from our prism fell across the page today while I was photographing it!