Old Testament Block III: The Miracle of the Oil

This story was our final one for the Old Testament and initially I found it a little confusing to teach.

One of our resources said that the Jews were under the rule of the Syrians, but the other said that they were under the rule of the Greeks. One source said Judah of Maccabee, one said Judas of Maccabee. So I had to go looking. According to Wikipedia, it was the Seleucid Empire against which the Maccabees declared their indpendence. This empire formed after Alexander the Great died and his lands broke up; that would be chapter 29 of V.M. Hillyer's A Child's History of the World (1951), "A Boy King." Nowadays we would consider them as "Hellenistic," i.e. part of Ancient Greece, but their leaders referred to themselves as Kings of Syria. Ok, so both are correct. That clears up that.

The volume from the World Mythology Series -- these books are AWESOME and I strongly feel every homeschooling family and Waldorf teacher should acquire every single volume -- for Angels, Prophets, Rabbis and Kings: Stories of the Jewish People covers Hanukkah on pages 117-121 and helpfully explains that Antiochus was "the ruler of the Syrian Greeks." Nice! That's a good way of phrasing it. And this retelling gives you a very clear sense of who Antiochus was, and what keen ambition was driving him. "'I too will conquer the world like the great Alexander of Macedon,' he boasted."

Angels, Prophets, Rabbis and Kings:
Stories of the Jewish People

The second question, Judah vs. Judas, took me back to Wikipedia and its Maccabees article. They are going with Judah. So is Angels, Prophets, Rabbis and Kings. I originally got the term "Judas Maccabeus" from the chapter in We Will Build a Temple by Jakob Streit, but he seems to be outnumbered.

So, all in all, we did two stories and I am reasonably happy with the interaction between the pair of them. The first gives a simple history of the holiday and the second better explains the tradition of lighting the menorah (although in an indirect way). Between the two, I think it worked out.

The Story of Hanukkah

Hershel and the Hanukkah Goblins


Tomorrow, before we add this story to our MLBs and finish the table of contents and front and back covers, we will spin the dreidel and play the game (with raisins) and do a watercolor painting of a menorah.

main lesson book page for the miracle of the oil

and another option for a menorah watercolor painting

By the way, there is a class play script for "The Maccabees" in Hawthorne Valley Harvest: A Collection of Plays for the Elementary Grades by William Ward. This is available free online as a PDF from the Online Waldorf Library!

I'd like to say one final thing about the Old Testament Stories. I recently had a woman write to me to say that she was concerned about this block for her daughter because she found the stories overall to be extremely patriarchal and she was looking for something more balanced. If you have this concern, consider using Daughters of Fire: Heroines of the Bible as your primary text. Unfortunately, this lovely book (illustrated by Uri Shulevitz) is out of print, but that does mean that used copies are available and are inexpensive. The author is Fran Manushkin. We also loved her book about the story of Moses: Miriam's Cup: A Passover Story. Another book featuring a Biblical heroine is, of course, Queen Esther the Morning Star by Mordecai Gerstein. And, finally, Noah's Wife: The Story of Naamah is a lovely picture book by Sandy Eisenberg Sasso which would be another good resource for retelling an Old Testament Story in a way that revolves around a central female character.

Daughters of the Fire: Heroines of the Bible

Noah's Wife: The Story of Naamah

I'm very excited about my Summer Camp this year! I'm only doing one -- since Zac is almost two and I mostly want to spend my summer hanging out with him -- and it's by special request. A parent was so interested in the Montessori Second Great Lesson ("The Coming of Life") that she suggested I turn it into a camp. She actually told me that in her son's second grade public school classroom, SCIENCE ISN'T EVEN OFFERED AS A SUBJECT. That's right... it's completely out of the curriculum! 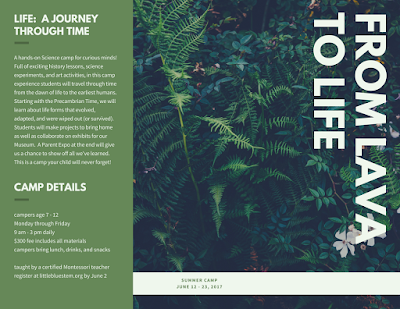 So I am putting together my camp and I am very blessed to have gotten a second and third round of donated Art supplies from my friend Leslie!

Sofft art sponges to use with pastels

Butterflies and Moths by Tim Holtz for Stampers Anonymous

five boxes of oil pastels, both water soluble and not, including

nine sheets of assorted reusable plastic stencils including geometric designs, insects and flowers, birds and tree branches, as well two sizes of the human head, plus

6" x 6" Doily Kaisercraft Template (we have two of these)

12" x 12" Wildflowers by The Crafter's Workshop

12" x 12" Hummingbirds by The Crafter's Workshop

These stamps and stencils will be so great for our Calendar Project! We are going to take the entire time Earth has been in existence and compress it to a scale of 365 days, then create a 2017 Calendar for each child to take home which will show WHEN each new form of life evolved (or was wiped out). As they use the calendar for the rest of this year, they will be reminded of the Second Great Lesson. And it's a perfect project for giving kids a concrete sense of just how much time passed before there even was any life on this planet!

(I'm using the Time Analogy information from page 37 of Michelle Breyer's Early Humans. Knowledge is ever-evolving and science doesn't stand still. Scientists continue to provide us with more evidence all the time... but this will serve as our starting point.)

The best part is that each 12 x 12 blank calendar has a section where you create the artwork for that month, and our stencils will be great for creating art that represents what was living on Earth at that time. Even the Clouds stencil represents an important stage in Earth's History and the Coming of Life!

And Becca just had the greatest idea! The BEST thank-you gift I can give Leslie would be to make her one of these calendars! She will love seeing that all of the art supplies that sat unused on her shelves are now being used and well-loved. I appreciate her generosity so much!!

P.S. If you take a stencil out of the packaging and then wish you hadn't, 12" x 12" page protectors are awesome! They are also hole punched for a three ring binder. Having all your stencils organized in a binder is so much nicer than searching through a pile, and you don't have to worry that the fragile parts of the designs will get ripped up.

If you want to watch a great TED talk about this topic, I highly recommend this one by the amazing nature photographer Franz Lanting. His work on this topic is also available as a coffee table book:

You can also find a list of all the books I use when I teach this lesson on my Montessori Lending Library page. The Lending Library Card is one of the services I offer (in addition to homeschool consulting and curriculum writing). It's just $36.00 per year, which is $3.00 a month and less than 10 cents a day!