A Waldorf teacher and I are starting a book study, just the two of us, looking more deeply into the relationship between anthroposophy and Christianity. She wants to better understand what Steiner wrote about Christianity, as well as consider ways in which Waldorf schools can thrive while not diluting their anthroposophical roots; this can happen (accidentally or on purpose) in order to spead the school model, particularly when it comes to charter schools. She argues that editing or removing the spiritual basis to Waldorf education makes it NOT Waldorf education and that this is not what Steiner wanted. Spreading methods like biodynamic farming or Waldorf schools without also spreading anthroposophy misses the point of the whole thing.

She is interested in re-reading Steiner deeply and/or finding new resources; I am interested in gaining a better foundational understanding of anthroposophy as part of my teacher training. Thus we have decided to study together.

So I will be updating this post as we go along.

Our first reading -- available free online at the Online Waldorf Library -- was And Who Shall Teach the Teachers? The Christ Impulse in Waldorf Education. The publisher is the Pedagogical Section Council of North America. The Pedagogical Section is one of the departments of the Anthroposophical Society's School for Spiritual Science.

How can we understand the non-denominational nature of the Waldorf school even as we address the central role of the Christ impulse in the Waldorf school? This collection of lectures from the Colloquium held in Spring Valley, NY, January 2005, provides a thoughtful basis for a discussion of this challenging aspect of Waldorf education.

The authors seek to address why “this is not a call to Christian worship nor is it an appeal to any sectarian Christian doctrine.”

My specific notes on Dorit Winter's article are found in my blog post "The Chariot of Michael" by Dorit Winter.

In addition, we read a blog post called "The Montessori Educational Vision."

from the back cover:

Rudolf Steiner suggested that childen in the first Waldorf School who did not belong to a particular denomination could have 'independent Christian religion lessons' and Sunday Services.

This book is a comprehensive collection of Rudolf Steiner's thoughts and ideas about teaching religion in Steiner-Waldorf schools and about the Sunday Services for children. Extracts are from his lectures to teachers and faculty meetings.

In addition there are chapters by some of the early Waldorf teachers on how the Sunday Services were inaugurated and practiced in the first decades.

In addition, we contacted the Pedagogical Section in Dornach; we then spoke with the member of the International Religion Teachers' Gremium for the United States, Rudiger Janisch.

We also viewed the short film Waldorf 100. Here is the Waldorf 100 website, which lists all of the projects.

We also read an article called "Reflections on the Second Coming" by Robert Powell, as well as a book review (PDF) by Bobby Matherne of Steiner's The Influences of Lucifer and Ahriman: Human Responsibility for the Earth.

My colleague has done quite a bit of extra reading on these topics outside of our group, far above and beyond what I have listed here; I decided to pursue one personal line of inquiry after reading this excerpt from Faculty Meetings with Rudolf Steiner, where he gives a specific suggestion about a religion lesson including a discussion of the statue of Laocoön and his sons.

For the seventh, eighth, and ninth grade independent religious instruction [anthroposophy, as opposed to the denominational religion lessons] we could move into a freer form and give a theoretical explanation about such things as life before birth and after death, and all the consequences of a life before birth. We could give them examples. We could show them how to look at the major cultural connections and about the mission of the human being on Earth. You need only to look at Goethe or Jean Paul to see it. You can show everywhere that their capacities come from a life before birth.

I became curious to see what else Rudolf Steiner had written about this statue. I wanted a better sense of what that conversation in the classroom might cover. After a little bit of searching online, I read the following:

Next we chose How to Know Higher Worlds: A Modern Path of Initiation.

In addition, we read The Meditative Life of the Teacher by Johannes Tautz. This set of lectures is available free online at the Online Waldorf Library.

I became involved with a Foundation Studies group at the Waldorf School of St. Louis, so we took a break from our book group for a while.

Thank you for posting this. I look forward to reading your updates.

The *Most* Compelling Early Readers

In Waldorf, we give children plenty of time for reading to "click" on its own, with tons of language support including -- but not ... 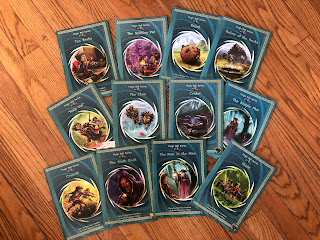