Main Lesson Book
We began, of course, by reviewing the previous lesson, The Vestibular System. Students completed their summaries and illustrations for their main lesson books.

Day One Story & Exploration
I took my story for The Ear from Linda Allison's book, Blood and Guts: A Working Guide to Your Own Insides.

The chapter is called "Ears: Receivers for Vibes from the Outside." I required that the older students take notes during the lesson.

It may seem incredible that we are STILL doing stories for The Department of Communication, but I reminded the children of the bearded mussels we observed. They are such simple organisms and they don't need a complex nervous system. We, on the other hand, are very complex organisms and capable of amazing things (and we talked about Albert Einstein and Stephen Hawking and Wilma Rudolph and other famous people), so it is only logical that we would have an incredibly complex Department of Communication to help all those moving parts coordinate smoothly with one another.

I think it really helped to bring those mussels into the classroom! When I ask the children to think of a simple animal, they have something to picture. 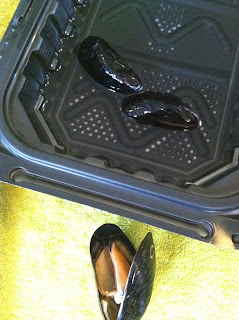 We began with page 97 (How the Ear Hears) and I had a little drum available to show to the children. It is hollow (open at the other end, opposite the head) and so I could put my hand inside it, which I recommend. It was helpful when we came to the part about the Eustacian tubes later on.

We looked closely at the diagram of the outer, middle, and inner ear on page 98 and then read the rest of the page (Silent Dog Whistle?) and looked at the diagram of sounds. I reminded the students that the retina in the eye translates the visual images into electrical signals which get sent to the brain; the cochlea in the ear does the same with sound vibrations. Both systems have a piece whose role is simply to translate events into a language the brain will understand: nerve signals.

We read page 101 (Eustachian Tubes) and did the activity Meet Your Eustacians, which is a little uncomfortable so I wouldn't recommend it with students who have sensory issues.

Then we did the activity Are Two Ears Better Than One? on page 102 and read the rest of the page (Sound Source). We read page 103 (Musical Bones [or, Bones and Overtones]) and I demonstrated how a tuning fork works. We then struck a tuning fork and put it in a glass of water. It makes the water splash out in quite a dramatic fashion! The kids loved it and they wanted to do it over and over. I got this idea from Torin Finser's School as a Journey: The Eight-Year Odyssey of a Waldorf Teacher and His Class.

We did the Turning Fork Test activity at the bottom of page 103 and students reported that they could hear the sound vibrating in their teeth. Then we did the "Making Cutlery String Chimes" activity from page 51 of Roberto Trostli's Physics is Fun: A Sourcebook for Teachers. This is another dramatic, and very beautiful, experience. I let each child take his or her 2 foot piece of string home so that they could demonstrate this to their parents.

We ended with page 104 (The Inside Story on an Old Wives' Seaside Tale, Amazing Facts).

One student asked me if it was possible to be both blind and deaf, and so I told the children the story of Helen Keller and her early years and the peppermints and then the arrival of Anne Sullivan and the pump and water and learning what a word was. We also talked about Ludwig van Beethoven and how he lost his hearing later in life and was quite deaf by the end of it. They understood why he would lay down on the floor and try to feel the vibrations of it. They also asked me questions about hearing aids and Cochlear implants. For my older students, I gave them an assignment. I asked them to each choose a disease which was related to one of the body systems we were covering in this first block and to research its causes and its treatments. They will work on this at home all week and will add their final essay to the end of their MLB. They each went home to choose a topic.

Day Two Review & Exploration
We began by reviewing the parts of the ear which are used for hearing (ear drum, hammer, anvil, stirrup, cochlea) and then we read The Music of Life: Bartolomeo Cristofori & the Invention of the Piano. This is a great tie-in on several levels. First, it is about an inventor so we used it as an example for our Virtue of the Week, Determination. Second, it laid the perfect foundation to the story of Beethoven which we will read tomorrow. Third, it is about the different volumes which sound can be, as well as the musical terms for them. Fourth, it is about a musical instrument which plays by a tiny hammer striking something, just like the bones in the ear!

After the story we listened to a recording of the 1720 pianoforte, which is located in the Metropolitan Museum of Art in New York. Then we listened to David Wong play Beethoven's "Ode to Joy" on the piano. There are more links to music on Elizabeth Rusch's website; she is the author of the book.

My seventh grade students each chose a topic to research in more detail for this MLB. One picked asthma (The Respiratory System), one picked glaucoma (The Eye), and one picked Cochlear implants (The Ear).


Main Lesson Book
Students began to draft their summaries and illustrations for The Ear.

Additional Notes
We read two additional books related to the students' interest in people who lost their sense of hearing. I spread them out through the course of the final week of our main lesson block and, again, considered them to be books which highlighted the virtue of Determination. I presented these picture books in chronological order: The 39 Apartments of Ludwig Van Beethoven and Helen's Big World: The Life of Helen Keller.

My daughter Becca also read Helen Keller's autobiography, The Story of My Life, and watched the wonderful 1962 film called The Miracle Worker.