Well, here we are on Christmas Eve!

Zac and I got back from driving his sisters to Wisconsin over the weekend and plunged into two weeks of relaxation (oh, and lazuring his bedroom with my lazure kit from Charles Andrade). All of the stars in Mary's path of stars are up on the wall behind the stable, and all of the elements of the four kingdoms have been added to our nativity scene (mineral, plant, animal, human). The Advent calendar of crocheted snowflakes stands empty and all of the snowflakes are on our Christmas tree. Tomorrow is Christmas Day! 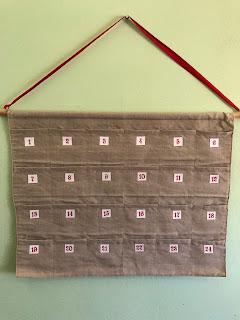 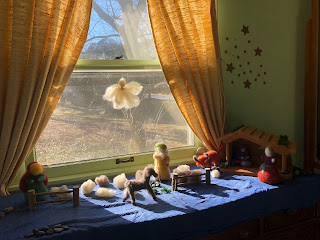 In our final week of school before the Winter Break, we celebrated this season of Advent.

Monday, December 17 we built the Advent spiral outside in my field with various evergreens. We also practiced our Circle Time verses and our two songs for the celebration Thursday evening with parents. I introduced the coconut shells for making the horse clip-clop sounds during "Jingle Bells."

Tuesday, December 18 we poured our Earth Candle for the center of the Advent Spiral. Since it was threatening to rain later, I made this in a large flower pot instead of directly into the earth outside. I used both red and golden beeswax, but the candle ended up very red. Instructions for this are in All Year Round in the Candlemas section (Feb 2).

We also made wet felted soaps as the children's parent gifts. This is so easy and it's a favorite craft. Working one on one it takes about 15 minutes per child. I love the Half Bar Handmade Organic Soap Sampler Set from Etsy seller SweetSallysSoaps. Each child had a different scent (which we wrote on the gift cards) and chose a different color of wool. I get my fiber from the Waldorf online store A Child's Dream. For wet felting with littles, it's easiest if you have a coarser wool like Romney which will lock together and felt quickly (as opposed to something smoother, like merino).

Wednesday, December 19 the children were off school for Farm Day and I carved ten apples into candleholders. We followed the Advent spiral instructions in All Year Round. My friend Shelby at the Etsy store TableMannersWoodwork brought over ten tree cookies and ten large gold paper stars for the apple candleholders to rest on in the spiral. I chose McIntosh apples because they are broad and sturdy and would keep wax from dripping onto little hands. I took the time in the grocery story to stand each apple in the bin up and make sure it didn't wobble, before choosing my ten. These apples tend to weigh about 1/2 lb each, so ten apples came to five pounds which cost me $10.00. For the candles, I chose the birthday ring sized candles from Nova Natural but in the red color. These candles are hand-dipped by special needs adults who live in Camphill Village in NY.

Thursday, December 20 we wrapped the finished felted soaps with red tissue paper and placed them in little gift bags and boxes. We also practiced holding the apples with their candles (unlit) and walking the spiral outside. Then, as it began to rain, we decided to move the Advent spiral greenery inside, and set it up in my large library downstairs. It was also Stone Soup day, which we brought to the evening potluck supper. Our stone soup contributions were onion, celery, carrots, cauliflower, kale, and baby spinach.

Thursday morning's story was The Twelve Days of Christmas: A Christmas Carol illustrated by Sheilah Beckett.

In the evening at 5 pm families and friends arrived and we had our Circle Time all together. The children had been practicing this all month. Then we had the children walk the spiral in silence, one at a time, and light their little candles from the center candle, then place them on a golden star. We sang "Round and Round" afterwards and gazed at how beautiful the spiral was lit. It was one of the prettiest manmade sights I have ever seen. I have a few pictures here but they absolutely do not do it justice. Afterwards we had a joyful potluck dinner, and the children took their apple candleholders home.

I had planned to read the Astrid Lindgren book, The Tomten, on Thursday evening but chose not to. It's a wonderful book, however, and ties in really well with the song "Round and Round" and the circle of the seasons.

The night that we did our spiral was also Solstice Eve, and evergreen spirals tie in with that celebration too! Here are some more ideas about the Solstice from the recent Tinkergarten blog post, Celebrate Winter Solstice.

For more great Christmas and Winter stories, I love Suzanne Down's puppetry newsletter. She sends out a free early childhood seasonal story monthly. Some wonderful back stories are The Christmas Rose, Star Child (or Star Money), and The Animals' Boxing Day. Boxing Day is December 26.

Looking ahead to next time, Laurie Clark wrote an Advent Circle which focuses on the movements of the animals which come to visit the newborn baby. She writes, "This Advent Circle provides a mood of reverence at the same time bringing playfulness in the movement of the animals to enhance the interest and participation of the children. The Circle can be done choosing just a few of the animals if it is a young group. The Circle is lengthy, but is carried by the many repititions." This is on page 45 of her Movement Journeys and Circle Adventures: Movement Enrichment with a Therapeutic Approach for Early Childhood with Nancy Blanning.

I really like the idea of doing more movement journeys in Circle Time and so I will focus on this in January. There's a wonderful series of gesture games around the theme "What Do Animals Do in Snow" in Willa Ellersiek's book Gesture Games for Autumn and Winter. My plan for January is to do the Polar Bear movement (p.120) in the first week, the Little Mice in the Snow movement (p.126) in the second week, the Birdie in the Snow movement (page 132) in the third week, and then create a story with movements for the fourth week around what honeybees do in the winter. My youngest student is intensely interested in this, and I think it would be wonderful to focus on the Winter World of Bees! From there we can flow right into Candlemas and dipping beeswax candles in that first week of February.

Available from Angela over at Waldorf Books: 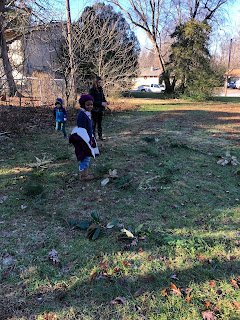 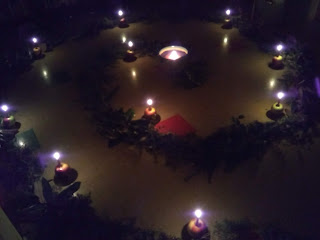 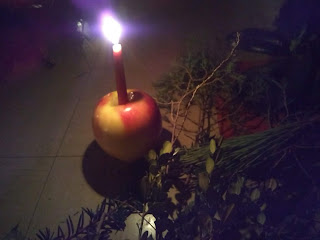 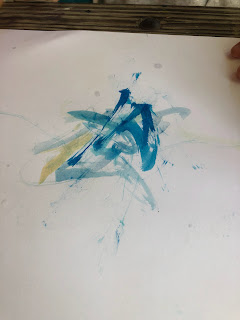