Happy Fourth of July to everyone!

Out of all of them, this is my absolute favorite holiday. I have amazing childhood memories! And it was always the same, year after year, from when I was small to when I was an adult. So comforting.

Sadly, none of the things that made it special can happen this year because of COVID.  To protect my mom and grandparents (one is about to turn 98, the other is 100) we didn't travel home to Maryland, and most of what we would have enjoyed there has been cancelled anyway. Zac isn't old enough to really remember last summer super-clearly, so he's not feeling a sense of loss. I am! But we are still finding ways to make this day special.

I'm writing this as he takes his naptime (aka quiet time to read and play in his room, because he rarely falls asleep mid-day anymore), so there are still a few things left that are planned for the afternoon. I would love to do the Egg and Spoon Race and the Egg Toss with him, since those are classic Fourth of July games. And we can sit up late watching the stars, if we have the energy to stay up this evening after our busy morning of gardening...

We spent a ton of time in the garden!

I will be completely honest and say that even though I am the kind of person who makes detailed spreadsheets, draws all of my garden plans to scale on graph paper, and is a trained Master Gardener, I'm a mess at gardening.  My gardening is completely haphazard, since I still spend so much time teaching and curriculum writing, even in the summer.  But I am making a concerted effort this year -- because I am not teaching summer camps -- to not forget that I planted things outside.

My vegetable garden is nowhere near what I planned, but the things that survived are doing well (seven heirloom cherry tomato plants, asparagus, parsley).   So we can count that as a win and ignore the weeds.  Golly day, I have a lot of Virginia creeper! 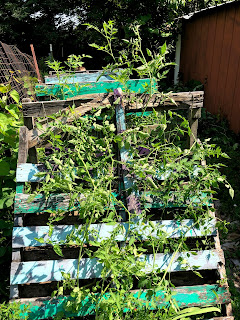 We had long suspected that Striped Chipmunk has been stealing the cherry tomatoes as they turn ripe (which is why we haven't had a single one yet), and we today found his little hiding spot for his stash. It was in a little nook on the top of one of the pallets.  I guess it seemed hidden to him but it was right out where we could see.  So cute!

Quickly, Zac managed to get the first ripe tomato we've harvested all summer! 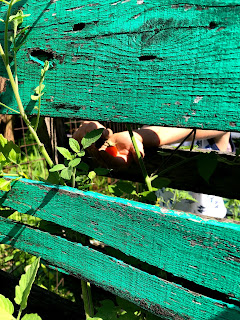 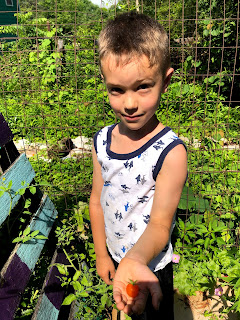 He is having a great deal of fun spraying the garlic spray all around, and I told him he can spray as much as he wants. Go for it, little dude. But he needs to spray the flowers and baby tomatoes, not the wood of the pallet trellises themselves. Turns out there was a little misunderstanding there... 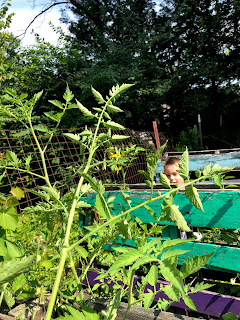 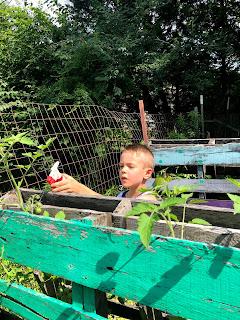 I don't think Striped Chipmunk will care too much if the wood is stinky. We want him to stay away from all that fruit!!! 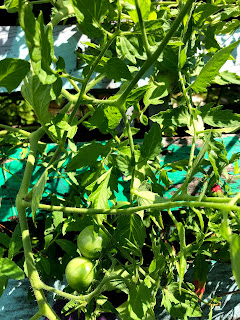 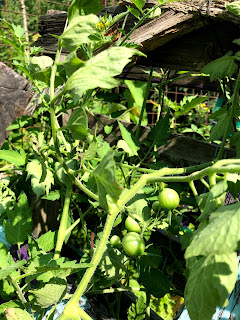 Inside the vegetable garden I had originally wanted to do a fairy garden.  I found a pretty spot under a wonderful arching tall bush. However, a few weeks ago we ended up putting Zac's new digging pit there instead since it was in the shade and because anytime he wanted mud to dig in we could just turn on the sprinkler and water the garden. Ta da!  Mud!  He even gave himself a little board bench to sit on when he digs.  The mud dauber wasps have discovered it as well, so he likes to watch them load up and fly off. 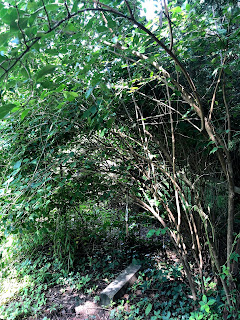 A few days ago we did find a volunteer squash of some kind growing VERY happily from the compost pile. (I had hoped that would happen a few years ago when I threw all the pumpkins in the vegetable garden in November and wanted a whole garden of volunteer heirloom pumpkins. But no.) However, this plant is happy as a lark and I have no idea what it is. It clearly is a squash, but it could be almost anything. Pumpkin, spaghetti squash, acorn squash, butternut squash, yellow squash, or zucchini. It has its first blossom, so I guess we will know at some point.

Out of the sensory garden plants, the lemongrass is still doing well, but the mint and rosemary didn't make it.

We decided to leave the lamb's ear where it was (happily taking over my entire vegetable garden) instead of moving it to the sensory garden, and instead we used the space we had cleared for it to plant Zac's pumpkins today. Three kinds of pumpkins. All three good for jack o' lanterns, and two are good for eating as well! One is orange (Early Sweet Sugar Pie), one is red (Red Warty Thing), and one is blue (Jarrahdale). We'll see what happens.

ONE pumpkin plant out of all of that would be plenty, since I know how big they get! So I'm hoping our germination rate isn't too magnificent.

Zac labeled each section with a different rock. A kindness rock with a heart for the red pumpkins, an ocean rock for the blue pumpkins, and one of his Froggie Friends for the orange pie pumpkins. He carefully drew a diagram of the rectangle with three sections on a piece of graph paper just like I do for my garden beds. It was adorable! 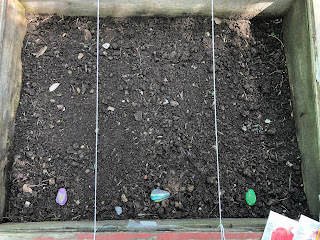 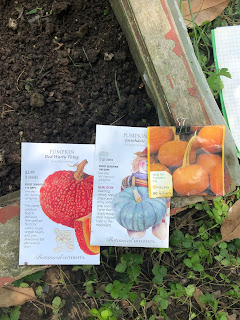 We also moved the kale from the vegetable garden (where it was still sitting in its peat pot, unplanted) to the pollinator garden, and I may give up on eating my basil and move it there as well and let it flower for the bees. I got seven different kinds of basil this year and we just don't eat that much basil! It is fun to taste all the different flavors though.

I have one bronze fennel that survived neglect, four Joe Pye weeds, and four bloody dock. Plus the milkweed that came back all on its own. I think the asters are still okay, although they are crowded by weeds. We are putting down cardboard as weed block but it's slow going. I should have put cardboard or newspaper all around the baby plants when I planted the garden, instead of leaving all that grass alone, but I was confident that I would be able to cut all the weeds down as they grew. I really wanted a no-till garden, since they're much better for the Earth (I remember the Greenhouse Gas Calculator from the Smithsonian Institution that we did in the Farming & Gardening block). But I haven't cut the weeds down by hand and so now I just need to smother them with newspaper and/or cardboard.

We also washed out and hung the hummingbird feeder! We made nectar (1 part sugar : 4 parts water). And when I put Zac down for his nap I read him some hummingbird things. I went to my Zoology page on the website and searched for Hummingbird. And five different things came up! It takes so much time to make lists, but it is so incredibly handy in the long run.

Here is what we read:

p.30 "A Tiny Apartment"
this was fascinating

Creatures of Earth, Sea, and Sky

by Douglas Florian
p.14 "The Hummingbird"

The Random House Book of Poetry for Children

p.82 "The Hummingbird" by Michael Flanders

Honestly, the last two poems weren't my favorites of the bunch but if you have those books on hand, you may as well know they are in there. But we loved the Animal Architects book. And the first two poems were great fun!

We have lots of peat pots leftover from the plants that died, so I'm thinking of starting some more seeds.  I would love to have lavender, dill, Chinese lantern plant, sunflowers, and morning glories. Maybe I will someday!

Hope everyone is doing well and staying healthy and, if you're gardening, I hope your gardens are thriving!

Aha! It turns out that the chives can go in the butterfly garden as well...

Five Herbs to Include in a Butterfly Garden
https://www.thespruce.com/herbs-to-include-in-butterfly-garden-1762022