I really enjoy looking back at the notes I made when Zac was one and two, to see what he liked to do best each month. It is amazing how quickly they change! And if you have to get a present for a grandchild or a friend's child later on, it is nice to remember what they find fun at that age.

Now Zac is 5 1/2 and really in that Bridge time between Kindy and First Grade. So I thought I'd write down again what he's doing and enjoying. He wove his first correct potholder yesterday. He's loved to stretch the loops across the loom for years but now he actually understands and can do the over/under rhythm for weaving and is also creating patterns with his colors. So that's exciting! He also likes to sew on his piece of burlap and really wants to help me weave on the Nine Norse Worlds tapestry I'm weaving. 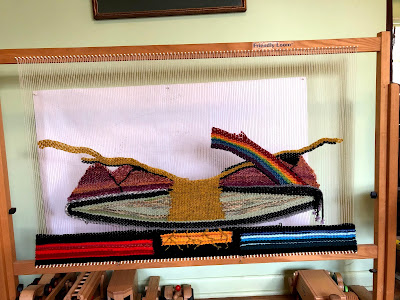 Zac likes board games... always has... and he's into more complicated memory games as well as visual/spatial strategy games. We have lots of games that don't require reading. And I just introduced Wildcraft, which he was really excited about because he has seen the big kids playing it!

Here are his current favorites:

I know he's also old enough for Kraul's lovely game Shadows in the Woods (which I'm going to give him on Candlemas). I've been looking at this one in Nova Natural's catalogue since the girls were little. I can't wait to play it!

There are also a few games that he could probably handle but I'm going to wait until First Grade so that they feel new and exciting. These are Mancala, Qwirkle, Bingo (with numbers, and the bingo cage and balls), and Racko.

Some things from Early Childhood that are still going strong: building with blocks (Grimm's Large Stepped Pyramid and the Rally Building Blocks set), the Cuboro marble maze, play kitchen foods, dolls (his favorites are the four fairies from Magic Cabin), wooden animals, and the big basket of play silks.

Sensory bins are still big, as is the mud kitchen and the water pump outside, and he loves his little plastic animals that are allowed for sensory play and bathtime. I am not in favor of plastic overall but there's no way wooden animals are going in a bin of shaving cream! Sometimes plastic has its place.

He's really into his wooden trains, Legos, and K'nex. I rotate these three things. The Legos and K'nex both came from other families but he loves them so much I ended up not saying no. I didn't let the girls have any plastic at all, but I've softened a bit with Zac.

He absolutely adores his Fagus trucks. We have quite a large collection by now because I have gotten several each year... we have the car carrier and two wooden cars (zippie and speedie), the fire engine, the trash truck, the tractor, the hay wagon, the horse trailer, the front end loader, and the telescoping loader. He has now graduated to the more tricky ones with the strings. We get our Fagus trucks from Nova Natural.

Of course all kids love art, and Zac is no different. Drawing, painting, clay.

Plus he really enjoyed making the 2021 Calendar project with me and watching me write the holidays and birthdays after it was finished. I also wrote in all of the numbers, of course, except the straight line number 1 which I let him write at the start of each month. I wanted to show him now that letters and numbers start in the air and go down to the ground. I have noticed that children who try to teach themselves to write want to start their letters and numbers on the ground... maybe because they are trying to line things up correctly? But it's a bad habit to get into. Penmanship is something you have to watch like a hawk and nip things in the bud before they lock in via muscle memory.

Favorite toys from the 12 Days of Christmas were his new Fagus trucks, the front end loader and the telescoping loader (especially nice with those were the felt "slingshot ammo" balls, since they make great cargo for scooping and dumping), as well as Quixo and Pylos, Tickle Bee (a vintage game from my childhood which I finally tracked down on eBay), the giant squid, and the Fairy House kit I made him. The Fairy House kit was full of blank peg dolls, tree blocks, lots of little nice things like tiny ceramic tiles and corks and acorn caps and cinnamon sticks and shells, and the Grimm's Large Rainbow Stackers and the Large Semicircles (I got those from A Toy Garden).

I, completely accidentally, gave him the exact number of peg dolls as there are arches in the rainbow and he lined them all up to match. We also have the Rainbow Forest Set of Trees and they are just the same number and same colors. Now he wants to paint each peg doll in a matching color to its rainbow arch! I think we will actually dye them with food coloring, the same way I dyed the pieces for the Montessori Sentence Analysis material, so I got a fancy food dye kit for mixing precise colors.

Zac loves to sweep, dust, and help cook. He likes to bring the trash can and recycling bins up from the street, bring in the mail, and get the newspaper. He walks the dog in our yard (the dog is tiny... half Chihuahua and half Yorkshire Terrier) several times a day and plays with him constantly since there are no other children here. He also likes to feed and pet the rabbit.

Outside Zac loves working with child-size garden tools, and anything with digging or climbing or balancing or running or swinging. He's climbing trees and building forts constantly, and I got a huge delivery of mulch at the start of the school year and he loves to sit on the pile and just dig in it endlessly.

We are just about to start with riding a two-wheel bike. Riding without training wheels is one of the indicators of being ready for First Grade. So is tying your shoes, which he can do. I made one of those nifty little egg carton things to teach him. I punched the holes with a yarn needle, and finger knitted two long pieces in two different colors and tied them in the back. 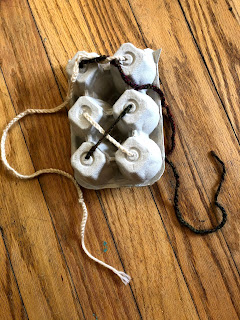 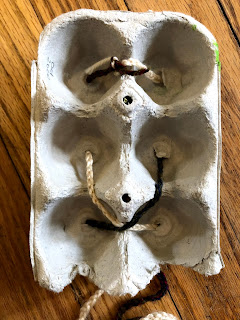 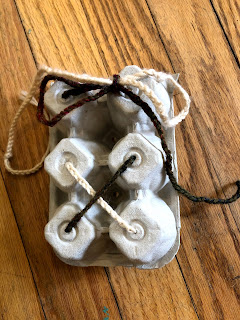