Our Great Artist for the month of September is Michelangelo. Using MaryAnn Kohl's suggestions in Discovering Great Artists: Hands-On Art for Children in the Styles of the Great Masters

I had the students paint with bright tempera paints on wet plaster. Here is how it went:

First, I had a difficult time finding plaster of Paris which is not as readily available as it used to be. Finally I found some and promptly bought up all they had (three large containers @ $4.00 each). I recommend that if you have a local source for plaster of Paris that you get more than you think you will need for this project. Or consider getting it from an online source

I bought inexpensive packs of 6 9-inch pie pans from the grocery store for the plaster of Paris molds. I waited until the students were ready for the lesson before mixing the plaster (instead of mixing it while they were in Spanish class and then having it be ready). I wanted them to get an idea of the complexity involved. Mixing it just right, spreading it, waiting patiently for the perfect consistency, then rushing to complete the work before the plaster dried.

After the ratio lesson and before mixing the stuff, I passed out the pie pans. I had the children emboss their initials on the bottom with a regular pencil. Then we passed out little 4 cup egg carton sections with four colors of tempera paint. I had an array of inexpensive brushes available and a bucket of water for soaking brushes that got plaster in them. If the children try to paint too soon, they will get wet plaster in the brush and it needs to be soaked right away. Every child got a thick popsicle stick for smoothing out the surface of the plaster and for poking it to see if it was firming up. This is better than having them poke it with their brushes.

I cut short pieces of yarn for the children to hold in place as I poured the plaster; these hardened into place and became hanging loops for the Fresco Plaques.

I mixed the plaster in a large bucket and accidentally didn't stir it well enough so each child had to continue to stir to break up lumps in their pie pan. I need to use a trowel to mix it and I need to stir it for a longer amount of time. After I ladled out a scoop of the goo, they sat and observed their plaster and waited and waited and waited. It was about ten minutes before suddenly the surface was firm enough to paint on but not too dry. Then you have to rush because you only have a few minutes to do your artwork. We definitely got the idea of the complexity of fresco painting!

I played Haydn's "The Creation" in the background -- LOUD -- when we painted. I think it added a lot to the experience.

If you try this, have fun! 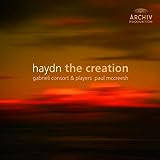 P.S. The plaques are fragile so I had the children carry them home without turning them out of the pie pans. The pans are handy that way.