Five Versions of Beowulf and a Grammar Mini-Lesson

Five versions sounds like a lot, but we have used them all! It's funny because I figured we would use the highly-regarded Seamus Heaney translation but it didn't arrive from the library in time and we HAD to get started.

One.
Background
The version I received as a gift when I was a girl and which provided wonderful background: Beowulf: An Adaptation by Julian Glover of the Verse Translations of Michael Alexander and Edwin Morgan

Two.
Old English - read
The version in Old English which is free online at Project Gutenberg

This version is nice because each part is a separate track on the CD, unlike the Old English version. We have divided our study of Beowulf into five portions.
"Story 1" is Grendel's First Attack and Beowulf's Arrival (prologue to part 10)
"Story 2" is Grendel's Battle with Beowulf (part 11 to part 18)
"Story 3" is Grendel's Mother (part 19 to part 26)
"Story 4" is Beowulf's Return to Geatland (part 27 to part 31)
"Story 5" is The Dragon and Beowulf's Death (part 31 to part 43) 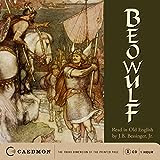 I ended up having to do an unexpected Grammar lesson today while I was looking at editing one of Natalie's summaries. I suddenly realized she is switching verb tenses throughout her writing. (For example: Beowulf went to sleep with his companions in a circle in the middle of the floor of Herot. He was waiting for Grendel to come. Grendel comes in and sees the men all in a circle on the floor. He grabs one and devours him.)

I reviewed Past / Present / Future Tense with Natalie and then told her authors usually find it easiest to write in past tense. It is the simplest to maintain throughout. I had her choose five random chapter books from our library. She was to look through each one and put it in a pile depending on whether it was written in past tense, present tense, or future tense. I probably should have made three index cards as labels but I didn't think of it at the time. It was a spontaneous lesson.

She chose the following:

Sure enough, she discovered for herself that they all ended up in the past tense pile!