I have found my very favorite collection of tall tales -- which are actually well written! -- in the trusty hands of Olive Beaupre Miller. Copyright 1939. She has 25 stories, enough to fill a main lesson block, and they are as follows:
Heroes, Outlaws & Funny Fellows of American Popular Tales 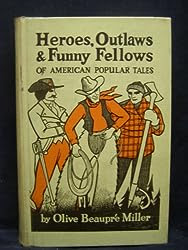 When Witches Rode Broomsticks
A Legend of New England

Christmas in Bethlehem, Pennsylvania
A Story Told by Czech and German Settlers from Moravia

Old Johnny Appleseed
A Tale of Ohio and Indiana

The Bell Witch
A Folk Tale of North Carolina, Tennessee, and Mississippi

John Buck, the Big Norwegian Sailor
A Story of the Green Bay Islands off Wisconsin and Michigan

Big Paul Bunyan and His Blue Ox, Babe
A Tall Tale of the Forests of Maine, Michigan, Wisconsin, and Minnesota as told by Loggers in the Lumber Camps

The Traveling Courthouse
A Yarn of the Kansas County Seat Wars

Kemp Morgan, the Hero of the Oil Fields
A Tale Told by the Oil Drillers of Oklahoma and Texas

Pecos Bill, the Cowboy
A Tall Tale of Texas, New Mexico, and Colorado as Told by American Cowboys

Joaquin, the Robber
A Story of the California Gold Rush

Natalie is working on the third portion of Beowulf and is making a model of Hrunting using the "Play Clay" recipe on p.18 of Mudworks: Creative Clay, Dough, and Modeling Experiences

I was so happy to find this modeling recipe! The girls have loved this one of Mary Ann Kohl's book (I think we have them all) and so consequently we are all out of salt. This modeling recipe does not use salt. It does, however, use a lot of cornstarch. I am OK with that since all I ever use my cornstarch for is making baking powder.