A Collection of Saint Stories

Leah and I will do 14 saints in her main lesson block. Now... which ones?

I have so many stories but naturally I need to narrow them down. I went looking for artwork to inspire me but this is a case where my Pinterest board is of little help, and it looks like the same saints are done again and again. I know I want some of the traditional ones, and I want some unusual ones too.

Here are the resources I have on my shelf: 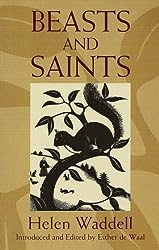 The Saints of the West

The Saints of Ireland 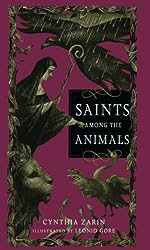 Saints Among the Animals

This collection is particularly useful because an illustration is included for each story. These illustrations are simply drawn and would be of great help for a MLB or chalkboard drawing. There are only 10 stories in the volume. Brief biographical notes about each saint are included in the back. 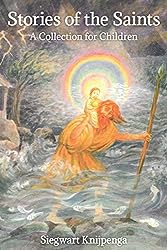 Stories of the Saints: A Collection for Children

Brigid: Have you forgotten me, Bride?

Francis of Assisi: Until the roses bloom again

Giles: Let us ask the earth

Benedict: Why is the last stone so heavy?

Jerome: Brothers, the lion wishes to stay with us

Barlaam and Josaphat: This is where I will be king

Eustace: You thought you would hunt me

Christopher: If you wait long enough

Antony of Egypt: I have come for my friend

Patrick: Because you did not forget my name

Thomas: Where is the palace?

Gregory the Great: At last he agreed

Beatrice: Had she not gone away?

Emma: Take what you can carry

Agnes: For you I would go through fire

Francis of Paola: This is my fire

Boniface: A house was build from the oak tree

Paschal Baylon: And the water always welled up

Veronica: You don't have to go to the painter

Ambrose: His words are as sweet as honey

Odilia: Because she had no light in her eyes

Brendan: And he looked into the depths

Nicholas of Myra: What storms there are at sea

Dionysius: They felt the earth tremble

Radegund: On my word, Lord

Joan of Arc: I am just a peasant girl

Luke the Evangelist: My eyes saw

John the Evangelist: The strength of the poison abated

The Giant at the Ford and Other Legends of the Saints

The Giant at the Ford, St. Christopher

Zita and the Rich Man's Cloak

St. Jerome, the Lion, and the Donkey

St. Moling and the Fox

The Farm-Labourer Who Wanted to See Jerusalem

St. George and the Dragon

St. Mochae and the Bird from Heaven

William Firmatus and the Savage Boar

Werburgh and the Troublesome Geese

St. Wulfric, the Boy and the Bread

There are other resources for Saint stories, such as the Harvest Loaf story in All Year Round: Christian Calendar of Celebrations

(St. Michael). There are indications for modeling St. Francis in Learning About the World Through Modeling: Sculptural Ideas for School and Home

and there are painting lessons for both St. Francis (four different paintings) and St. Michael in Painting and Drawing in Waldorf Schools: Classes 1-8

Painting with FORMS, as opposed to color stories, in second grade is a matter of some contention in Waldorf circles.

I've heard in many places that the child shouldn't begin painting figures until after the 9 year change (third grade) and that the Old Testament Creation stories are the place to first introduce this. Kelly Morrow did a wonderful DVD on watercolor painting which helped a lot when I was starting out; it is in the Waldorf in the Home store. It is suggested in Painting in Waldorf Education

that the child paint the saint stories as color stories, with the push and pull between the forces of good and evil being represented abstractly through color on the page. No figures are actually painted. You will need to decide for yourself what is suitable for your child. Leah is older than the usual age for doing the Saints so we will most likely use Thomas Wildgruber's suggestions.

contains instructions for flat wool pictures of St. Christopher carrying the child (figure 21) and St. Francis preaching to the birds (figure 27). Example pictures for each are shown.