Now that I have used the K-W-L chart idea more, I am finding a few quibbles with it. Yes, this is a classic graphic organizer. Three columns on a piece of paper. What I know. What I want to find out. What I learned.

But the biggest problem I see is that the learning process DOESN'T stop with L, "what I learned". True life-long learners have another step. They have new questions. I propose we add a fourth column. What questions I have now.

Natalie picked the South China Sea as her hot-button topic for Asia because she had heard about it on NPR. She knew something was going on there. I picked four articles for her to read. When she was done she looked at me and said, They're acting like the South China Sea matters.

Yes, they are. WHY, Natalie? What would make this matter to people in the U.S.? I was pleased that she came out of it with questions, not just answers.

So first I had her draft a summary of what was going on, based on her understanding of the articles, and then write a list of "questions I now have about the tension in the South China Sea." This actually worked as a really nice assessment tool. I read her questions and read the WSJ article and realized a lot of them had been answered in the article. So, I asked her, did you understand this article? And she said No.

After talking to her about advocating for herself as a learner -- as well as being metacognitive and realizing she doesn't understand something -- we came up with a new plan.

We went back over the article from the Wall Street Journal slowly and carefully. It was at a higher reading level than the others. I actually had her read it aloud to me one sentence at a time. After each sentence I had her stop and then say in her own words what she thought it meant. It took a long time but she thoroughly understood it in the end and we had a nice conversation. We then re-read and revised her draft paragraph about the issue, and added some clarifying sentences, and then re-read and revised her list of questions.

Here is her final piece, which went in the main lesson book.

China has been constructing new islands in the South China Sea, which does not belong to it. Not all neighboring countries know how to respond. Barack Obama, the president of the U.S., is aggressively trying to deter China, showing support for the Philippines in particular, and defending the right of all countries to have free navigation of this waterway. China was left out of the recently completed Trans-Pacific Free Trade Deal. The U.S. has also recently sent a warship and two B-52 bombers to the South China Sea. There is a U.S. military base there, left over from the Cold War.

I think China wants to take over the South China Sea so it can control navigation and trade routes and possibly prevent ships from getting through to bring things to and from other countries. China is also building landing strips on the islands. This suggests that they are trying to control the air as well as the sea. China is acting this way because these actions are popular with the Chinese people, but they are unpopular with the rest of the world.

Why does China want to take over the South China Sea?

Is it either deploying military troops on the island or is the military building the islands?

If military troops have been deployed to the islands, why?

Who are China's enemies?

How long has this been going on?

Why is the U.S. involved?

Who would the Philippines side with in an altercation between the U.S. and China?

This experience makes me think I should actually read a book I have had on my bedside table for forever. 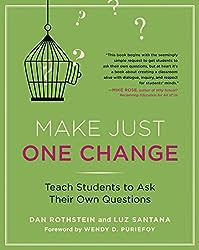 Make Just One Change: Teach Students to Ask Their Own Questions