Even though right now I'm teaching Form Drawing, Botany, Physics (Sound, Light, Heat, Magnets, Electricity) and Physics (Simple Machines), plus working with four tutoring clients each week, the number one thing on my mind right now is lesson planning for Music. Because I've never taught it before, it is getting the most hours of prep time. So I think I'll be posting a lot about Music while I wrap my mind about what I want to cover, how I want to pace it, and exactly which resources I want to use.

Michaelmas is Wednesday and I'm really excited about our Dragon Party! I have a lot of cool stuff planned. We've been working on memorizing a dragon poem so we will recite that, as well as read the rest of the poems in the book. I want to (finally) make the conker dragon from All Year Round, and Zac and I went and collected chestnuts today. So wish me luck with that! 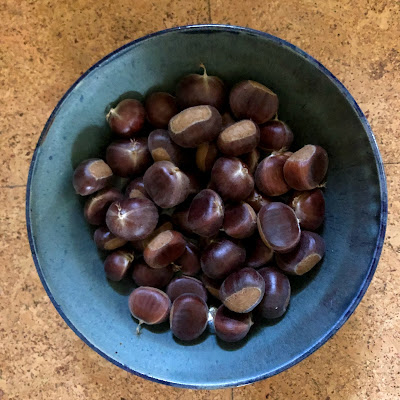 We will have vanilla ice cream, which goes with the poem we learned. We will read Saint George and the Dragon, and build an enormous castle wall of foam bricks and act out the story. Happily, I have a dragon cloak; a king crown; and a knight breastplate, helmet, sword belt, and sword. Lastly, I'd like us to plant snowdrops so that they will come up at Candlemas!

Since my plan was to read The Philharmonic Gets Dressed by Karla Kuskin on Wednesday for Music class, I'd particularly love to find a piece of Dragon classical music which we can listen to while we eat lunch! And I found a very interesting Dragon Classical Music? thread. Here are some of its suggestions:

"Siegfried"
Richard Wagner
opera - this is the third opera in the Ring Cycle
Fafner is the name of the dragon; he is slain in Act 2 Scene 2

The "Ballet Music" was originally a part of the opera "Hàry Jànos" and was performed under the title "Dragon Dance" in Hary's fourth adventure, "The End of World," on October 16, 1926 in the Hungarian Opera.... Kodály [later] renamed the "Dragon Dance" "Ballet Music," not wanting its title "to preserve the dragons; why, others, too, can dance like dragons."

"The Banner of St. George"
Edward Elgar
orchestra and chorus

It's exciting to have so many options!

And we could make quick pickles! That would be so fun.

"They eat vanilla ice cream / And pickles mixed with ink."