This year we had several problems with our monarchs... and learned a lot! We even had cannibalism. On the evening of Sep 3, I went downstairs to count chrysalides for this blog post -- luckily -- and found a stage 5 instar nibbling on a chrysalis! I went racing outside to get some more milkweed for them. They really are ravenous at that stage!

I have notes and pictures in my earlier post Problems with Your Monarchs. Some of the things that went wrong are still a mystery to me.

But, we had a lot of successes as well, and I am happy to share them too.

We returned several smaller caterpillars to their milkweed plant home, so that we could focus on the pupal stage, and because I don't want to disturb the chrysalides by constantly taking off the lid to refresh the milkweed!

I also relocated a chrysalis that actually formed on the milkweed tube rack, and which I thought was too close to all of the frass. I didn't think I could wash the rack because it would disturb him. I used fine point tweezers, wadded up his silk, and used masking tape to attach him to the underside of the terrarium lid by the others. He does have a small dent in his chrysalis where it was pushing against the plastic of the rack. Hopefully he is unhurt! 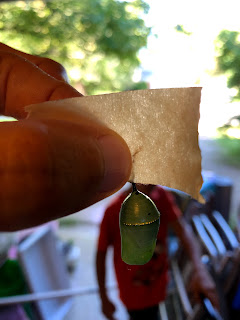 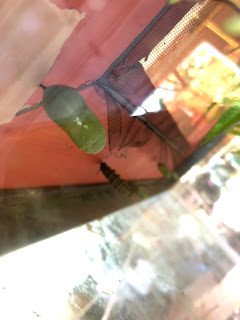 The remaining hanging caterpillar was removed today because he had died. We had three others hang and die, two which I listed on Sep 5 as a J and one which was hannging on Sep 4 as a lowercase "n" (belly attached to the ceiling, head and feet hanging down). Very strange. They were quite obviously sick and/or dead. I don't know if it was more tachinid infection or something else.

Sep 10 - 13 total chrysalides
two deaths, two given as a gift

Our last cat to go into chrysalis form -- the one we woke up to on Sep 7 -- had a chrysalis which almost immediately began developing black lines. Ultimately I decided it had died, along with another one that died inside its chrysalis. So we lost 8 in all. 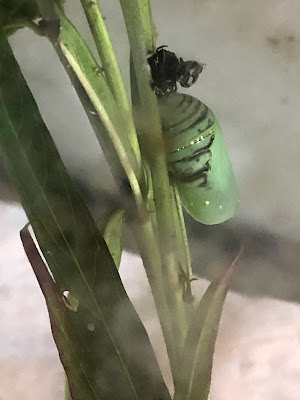 Now, for the good news about the monarchs which emerged from their lovely jewel-like chrysalides!

Sep 12 - we woke up to two butterflies!
one was the surprise chrysalis which we found attached to the table; the other, presumably, was the one who went in Sep 1 (which would be 11 days) 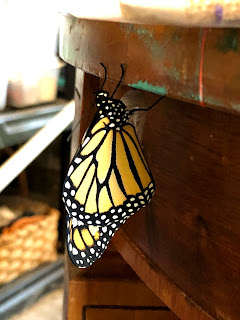 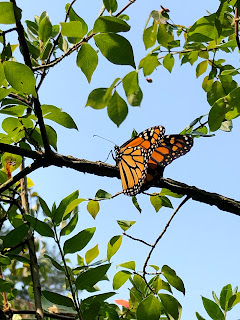 When we took the one from the terrarium, on her stalk of milkweed, outside I placed the tube by the house so that the wind wouldn't accidentally blow it over while she was resting. When she was ready to take her maiden flight, she climbed up the side of the house! They always go up to the highest spot.

Luckily, we have lovely textured bricks which she could grip. 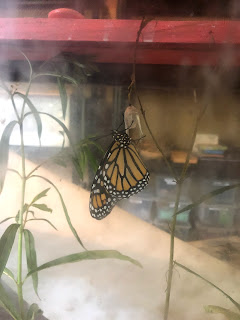 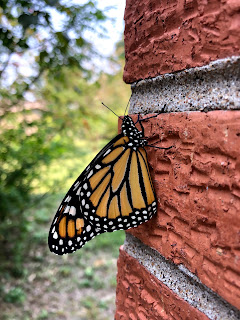 Because the pink spotted ladybugs we raised and released as part of Botany have naturalized to living in our yard, and there were a ton of ladybug nymphs on the milkweed, we've also ended up having ladybugs go through their metamorphosis in the same terrarium. Just found a newly hatched one! 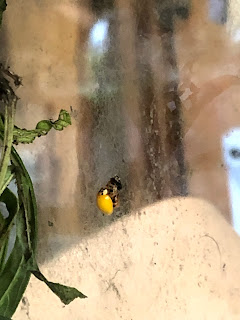 Sep 13 - we woke up to one butterfly!
this was the butterfly with the dented chrysalis

If she's one of the ones that formed Sep 2, that's also 11 days. She came out without any trouble and was healthy.

We did have another chrysalis death however; a predator of some kind seems to have gone through its metamorphosis as well. We woke up to an insect sucking a chrysalis like a smoothie! 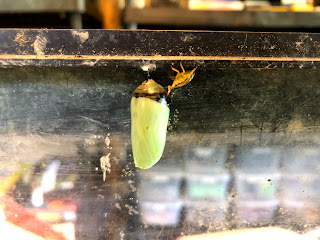 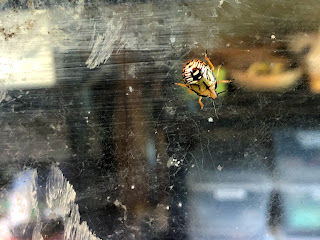 Beautiful but deadly! I captured it and put it and the destroyed chrysalis in the freezer.

Sep 14 - we woke up to three butterflies
and one more emerged during Circle Time!

Presumably these are the remaining Sep 2/Sep 3 butterflies. Still 11 days.

One of these butterflies had a sideways chrysalis. The milkweed stalk it was on became shriveled when it dried and I noticed too late that the caterpillar had gone through its metamorphosis nearly horizontally. I was very concerned for the butterfly, since so much that you read says that they MUST hang to develop. But she seems to be completely fine! That is a relief. 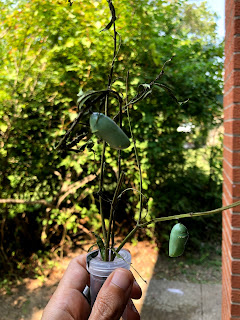 Sep 15 - today we woke up to a very dark chrysalis

I was certain that it would come out soon... but it is raining heavily. We wonder, do they respond to the humidity in the air and wait to emerge? Since butterflies can't fly in the rain?

As it turns out, when the rain slowed down at 9:45 am the butterfly emerged. We don't know if it was a coincidence or not!

This last one was special because when I was helping him climb onto a stick so I could carry him out of the terrarium to take his first flight, he flew onto ME and began to climb up my arm as his "highest place." Then he flew away. Good-bye and good luck to all of our butterflies this year! 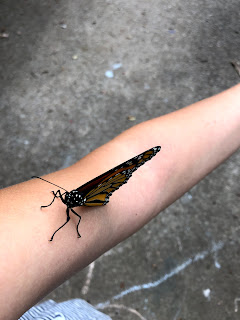 So we had a total of 12 healthy butterflies and 9 deaths (from a variety of illnesses, parasites, predators) this season. And we learned A LOT!

This year we also shared the monarch love with lots of Zac's friends, taking "care packages" of caterpillars and milkweed to Michaela, Francesca, Kamma, Feivel, and Henry... and a chrysalis to Joe. I hope they had fun!!!!

My terrarium still has some mud on the sides of it from when we raised tadpoles. I was afraid to clean it in case I might hurt the butterflies. Finally looked up the correct proportion of bleach to water and the procedure: