yoga and meditation outside on the grass

although I don't have them, there is an entire series of the Word Teasers card decks, including SAT vocabulary and word origins

introduction of the salt tray for penmanship practice

introduction of Philosophy as a Special subject: first topic, Nature

finishing up cover pages and table of contents on our Mathematics MLBs in preparation for a new Cultural block starting today:
Aesop's Fables and Puppetry for my younger group and
Ancient Mythology of India, Persia and Mesopotamia for the older 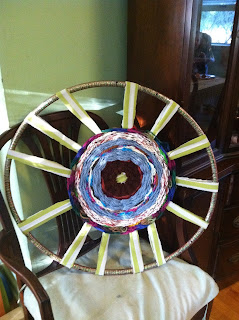 Aesop's Fables:
"The Milkmaid" from Borrowed Feathers and Other Fables

Circle Time:
Poem ("Substitute" by Aileen Fisher, from My Cat Has Eyes of Sapphire Blue)

When Blackie lost her kittens,
she sadly went to roam,
And found a baby rabbit
and carried it back home.

She washed it and she fed it
and brushed it till it shone,
And burbled it a kitten-song
and raised it for her own.

Morning Pages (using rich language to SHOW not TELL something)

Aesop's Fables:
adding The Milkmaid to our new Cultural main lesson books, hearing "The North Wind and the Sun" from Borrowed Feathers and Other Fables, acting out the story with our basket of silks as the costumes

watercolor paintings: before beginning the first story, paint India, the Arabian Sea, the Bay of Bengal, the Himalayan Mountains, and the Ganges River, using pale blue for the shape of the entire peninsula and dark blue for the river, yellow for the surrounding water, and red for the mountains, and watercolor pencils to label each item on our map 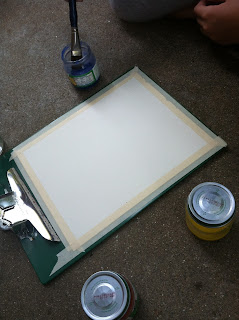 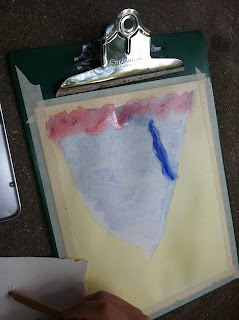 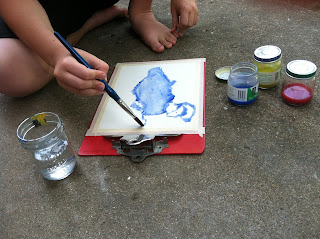 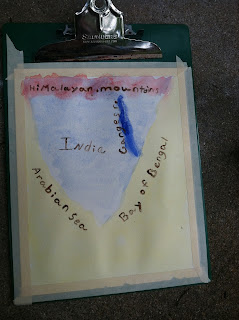 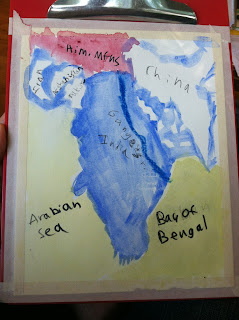 We will be hearing stories from two collections of Ancient Mythology:

Hear "Manu and Atlantis" and "King Sangara's Horse" from Kovacs (morning). Hear "Baghiri and the River Ganges" and "Indra, the Warrior God" from Kovacs (afternoon).

Philosophy:
follow up to yesterday's conversation, where the children decided (on their own) that they would each choose an endangered or otherwise mistreated animal to research and then present a report on that animal to the class. choosing of animals. group discussion of the criteria for the report.

I thought some of the questions were extremely interesting. I've never before seen an animal research report, which are pretty typical in school, which included a discussion of what the relationship is between humans and the animal in question. That shows the influence of our Philosophy discussion from Monday! I couldn't be more pleased with how they have taken up the task of thinking deeply about Nature.