We did this project to go along with chapter 5 of String, Straight-Edge & Shadow: The Story of Geometry by Julia Diggins. 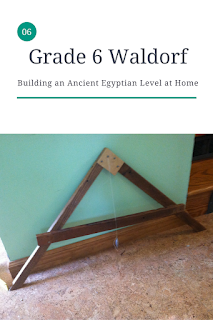 Thank you to the family who lent us a mitre box and saw!

The remaining items we scavenged from my Granddaddy's shop, with the exception of the lead weight which I got from Dick's in the Fishing section. Total cost for this project: $5.21.

I read but did not exactly follow these instructions on Instructables: Ancient Egyptian Combination Square and Level.

We began with something my Granddaddy had built to lean against the long dining room curtains and keep them flat against the wall, instead of billowing out over the heating vent, thereby causing all the heat to go up behind the curtains in the winter instead of out into the room. 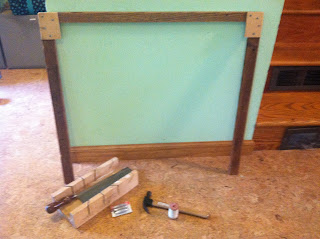 We removed one leg of this using a screwdriver and set it aside, to be our crossbar later on. 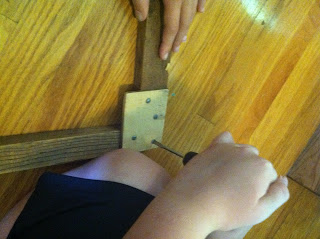 We were left with two pieces of wood of uneven lengths joined at a right angle. Perfect!

We then measured the length of the shorter leg and marked with pencil on the longer leg where we needed to cut. We had to take off the extra so that they would be an even length. We used the saw and mitre box to cut off the extra length. 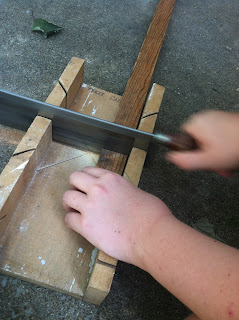 We then used the saw and mitre box to cut the end of each leg at a 45 degree angle so that the level would stand, well, level, when it was on the ground. As luck would have it, my grandfather had used scrap wood and the two pieces were different kinds of wood. One was a hardwood and one was a softwood. Which made a real difference in sawing! The children also noticed that the sawdust was two different colors.

We were happy with our progress thus far! 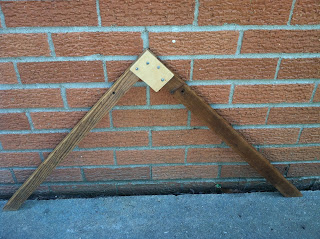 Now we had to attach the crossbar. According to the Instructables, Ancient Egyptians had already developed a wood glue. We opted to hammer our crossbar on. One, this meant no drying time and so we could use it sooner. Two, kids need practice hammering things.

The children very carefully marked the legs with pencil where the crossbar was to be attached. We had a long conversation as to whether the crossbar needed to be level itself, and at 90 degrees to the point at the top of the level, for the tool to be accurate. In other words, when you make the tick mark at the center point of the crossbar, is it relevant whether the crossbar is level?

We discovered that there is no point in measuring the center point until after you've attached the cross bar.

We also discovered that it's really hard to hold a piece of wood in place while hammering it and I wished I had some clamps. Note to self: BUY CLAMPS. We used roofing nails because they have large heads. 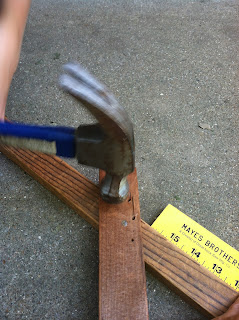 Our cross bar had a lot of mis-adventures (again, kids need practice hammering things) but we got it attached -- although it was not level because it moved around so much while we were hammering it -- and measured the center point and made a dark mark with pencil. 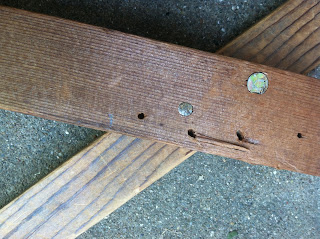 Then we loosened one of the screws at the top of the level, tied our string around it, tied the lead weight to the other end (I did this, and I wore gloves while I did so as not to handle the lead), tightened the screw, and watched to see if the lead and string hung down right through our center point. The students had a TON of fun going all around the yard to check where the ground was level. On an uneven surface, the lead weight and string do not pass through the dark mark on the cross bar. They hang to one side or the other. This was hard to understand from the illustrations in the book, but very very easy to understand when you are holding one in your hands.

All in all, a very successful morning! 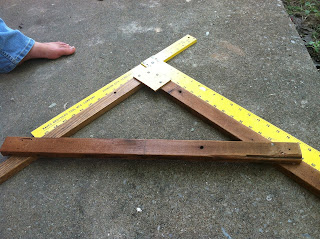 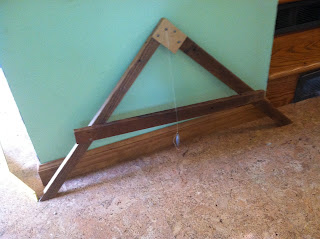