Weight vs. Mass... and the Sink/Float Bin

The Sink/Float Bin is such a classic activity for all ages!

In Early Childhood it's just about exploration (and sensory play).

In Third Grade I like to use it for a chance to practice using the kitchen scale, like how to zero it out first and how to read a measurement in grams & kilograms (and the difference between weight vs. mass). It is also perfect for talking about the Scientific Method and only changing one variable at a time. AND it is great for initial practice in creating a data table, since your only columns are item (and you can draw a picture), mass, and sink or float.

I like to have two towels by the bin and have children put the items which sink on one towel and the items which float on another. You can start to look for patterns, and make predictions for each item before you lower it in.

Even as an adult you can have fun with this. And you can have authentic questions. This time around my question was, will a sponge fill up with so much water that it will sink? And we put a sponge in and did not touch it for a few hours. Yes, it slowly filled with water. No, it did not sink to the bottom although it did float a lot lower in the water. 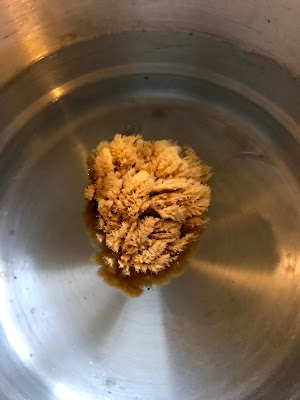 There are often surprises. Zac put in a melamine salad plate which floated when you didn't touch it but stayed down if you pushed it to the bottom. So we had to talk about whether to count that as sink or float. Also, a plastic strawberry container will float at first but then sink when it fills with water, which is interesting to record (and led to my question about the sponge).

To introduce weight vs. mass, I like to begin with a chat about how you could jump higher on the moon. If you are working with younger children, a picture book like When I Go to the Moon by Claudia Lewis is lovely. It is all dreaminess and zero facts. If you are working with older children, Jason Chin's book Gravity is a good choice. It is more fact-y but still really visual.

Older kids begin this conversation strong, explaining earnestly that gravity means that the Earth pulls you down but there's no gravity in outer space... and then their voices trail off. Yes, it's not that easy to understand. Personally, I find it mind-boggling that gravity didn't exist until the Big Bang?

So as we chat, I find that they love learning that everything with mass exerts a gravitational pull on everything else. I am pulling my bottle of water towards me right now, only very faintly. And it is pulling back on me, even more faintly. But the Earth is way bigger and so it is pulling on us both in such a way that it totally overrides our own weak gravitational pulls.

If you can jump higher on the Moon because it has less mass than the Earth and can't pull on you in quite the same way, it's also true that you weigh less when you're there. So weight is a result of where you are located. BUT mass is the amount of "stuff" which makes you up. And I have children poke themselves on the arm. It has nothing at all to do with your location. Your mass would go down if you cut off your arm (not that anyone would do that, it's just an example). Then there would be less "stuff" making you up.

Your weight would go down if you were on the moon and you wouldn't even have to cut off your arm. That proves that they are two different things!

I bring this up simply because if you are having children work with a balance and measure in grams and make a data table, you may as well train them to say "mass" instead of "weight."

I use an enormous lobster pot which someone donated years ago and which I have never put a lobster or a crab in. But it's perfect for my sink/float bin!

One great challenge that gives kids lots of practice in measuring mass in grams is to challenge them to find two items that have the same mass BUT one sinks and one floats. Have fun!

(For us, I found two items that each weigh 11 grams. One is a used Lyra colored pencil and the other is a roofing tile from our set of Teifoc bricks.)