First, I would like to say that I think I'm going to rename my Handwork for Homeschoolers classes.

I call them Handwork, because I started out by focusing on dyeing, sewing, felting, knitting, weaving, etc...

and then I ended up putting on a Theatre Camp over the summer...

It's not a lack of focus on my part. It's just really quite simple. I'm all about fostering creativity in kids in a whole bunch of hands-on ways. Since Creativity Class is a ludicrous name for an activity (what kid needs a class in how to be creative?), Creativity Workshops seems like a better title.

So, this weekend I had a nice Creativity Workshop session which focused on the book Moonsnail Song by Sheryl McFarlane.

We started by finishing up last Saturday's project, gluing Acorn Cap Jewels onto her watercolor pencil drawing/painting of a tree. Then I read Moonsnail Song, this week's story. To follow up, I suggested making a Shell Poem. My idea was that she would first compose a short poem. We would find each word in the newspaper and cut it out, and then we would Mod-Podge the words onto the inside of a shell. When she gave the shell to her mom as a present, the poem would be an unexpected surprise!

My student didn't like the idea of writing a poem but she did very much like the idea of a surprise hidden message. She chose "I love you, Mom, the greatest cook ever." We had a good time finding the words in the newspaper. For the word "you," to highlight it, she cut out separate letters Y, O, U. They were also larger than the other words.

After the words had been cut out (I think this is important, so that you know what size shell will work), we went to the shell collection in my bathroom and she picked out a favorite shell. As it turned out, I couldn't find my Mod-Podge so we substituted Elmer's glue thinned with a bit of water. After carefully placing all the words, she sprinkled a little bit of silver glitter on a few places. The finished Secret Message Shell is quite lovely!

a variety of shells, all different types and sizes

Naturally, we also had outdoor play time, snack time, and feeding, petting, and brushing the rabbit time. And another snack. This activity sounds simple but it is quite tiring to scan all that text for your desired words. It is helpful to plan in advance in which section of the newspaper you will look for each word. "Love" is easiest to find in the horoscopes or Dear Abby. "Greatest" was on the Sports page. "Cook" was easy... right there in the Food section!

We like to make a recipe each session, so Saturday's was tapioca pudding from scratch. This is easy. The recipe is right on the box. Tapioca, milk, sugar, egg, vanilla extract. The only difficult thing is all the stirring. So we mixed up the ingredients and let it stand for the five minutes, while I showed her the final activity for the day. This activity is found in Storybook Art: Hands-On Art for Children in the Styles of 100 Great Picture Book Illustrators by MaryAnn Kohl.

I think I have every one of MaryAnn Kohl's books! According to the note that popped up in Amazon, I bought them in 2005, so that would have been when Natalie was three and we started homeschooling. She's 14 now...

The activity is called "Window Letters" and it is on page 35 of MaryAnn's book. It is inspired by the picture book Light: The First Seven Days. You can see the design on the front cover.

I love this activity! You take a piece of heavy drawing paper (or cheap watercolor paper, which is what I always seem to have on hand) and draw a colorful design that fills the page. The other step is to take a piece of black construction paper, the same size as your illustration, and draw a single key word in large bubble letters. Using a white colored pencil works well. Then tack punch the letters of the word out and lay the black paper over the colorful paper. Your colors will seem to shine through the darkness.

A quick word about tack punching. This simple $6.00 tool is a MUST-HAVE for early childhood classrooms or at home use. 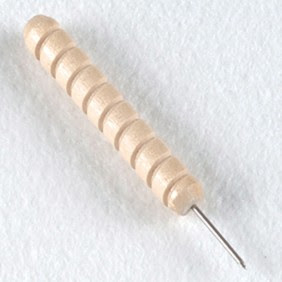 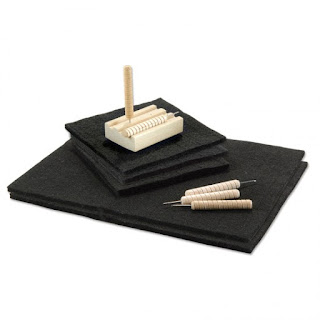 Tack punching is fantastic for building fine motor skills prior to the introduction of writing, and it allows kids to do a variety of art projects independently instead of relying on you for help with scissors. That independence is so important!!!!

Even after kids are old enough to use scissors, the tack punch is really handy when you need to cut something out from the center of the paper, or you need a small starting hole to get the point of your scissors into.

Ok, back to the "Window Letters." When you plan your drawing, it is fun to draw colorful shapes which are connected to your key word in some way, but that's not 100% necessary to be successful. Just make it bright and with lots of variety! Natalie used this technique for the front cover of her Renaissance & Reformation main lesson book (to show that the light of the Renaissance shone out, glowing against the backdrop of the Dark Ages).

(Yes, I know I promised to photograph last year's MLBs and now we have some for this year as well. I just only ever remember in the evenings and I want to take the pictures in natural light so they aren't dim and dreary.)

My student went to work drawing and filling her page with color, then tack punching out the words "I love Dad" from her black paper. We took turns stirring the pudding. When her family arrived to pick her up, the pudding was still too hot to eat so I sent a little care package of it home with her!

Tapioca pudding is a favorite treat in this house. I'm going to take a momentary digression and post my recipe list for this upcoming week. Today I made Ree Drummond's Brussels Sprouts with Butternut Squash and Pomegranate Seeds and it was delicious, as always. (A great book for the Greek myth about the pomegranate is Persephone by Sally Pomme Clayton.)

What else is on the menu?

Last week's "Flipped Classroom" Science Club session was a no-go when almost all of the families involved had a loss of intern...