Some SWI notes from our past few sessions:

The children worked in three small groups to discuss and decide how they wanted to sort their cards. They all had the same words but each group's cards were a different color. Then we came together and everyone arranged their cards under the headings. We looked for points of similarity, debated differences and discussed their logic for placing the cards where they did, and then used the Online Etymology Dictionary to look up words which were still in question. Ultimately, we made decisions about all the Maybe words and organized everything correctly under Yes and No.

Our word was < Nature > and the word bag cards were

Click on the photos below to enlarge and scroll through them with ease. 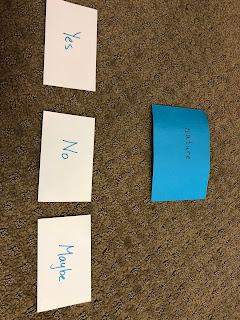 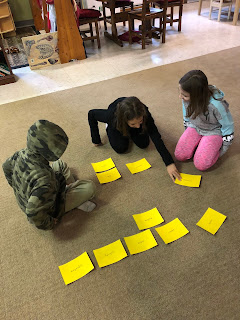 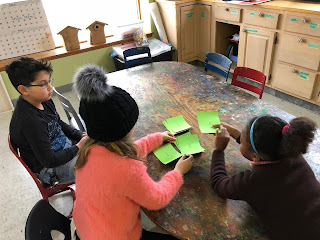 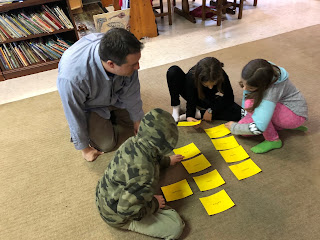 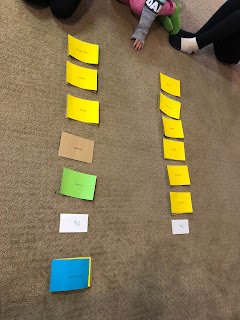 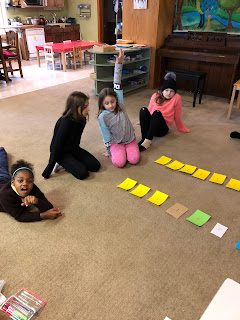 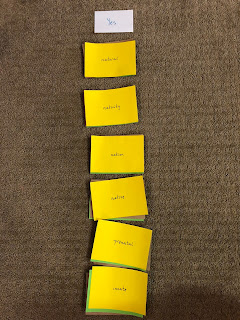 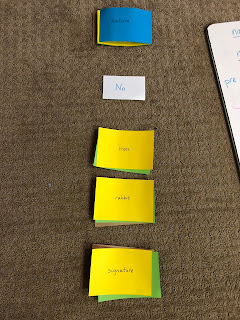 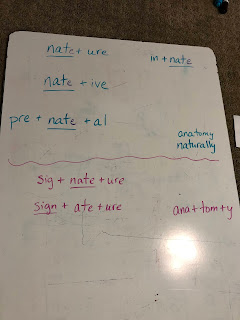 As a tie-in to our Zoology block, we had a special guest today in SWI. We first reviewed the insects we had been studying (termite, ant, solitatary and social wasps, solitary and social bees). Then we reviewed the insect life cycle in complete metamorphosis (egg, pupa, larva, adult). We had < colony > as our SWI word and drafted some possible word sums. You can see the children's thinking below, trying to connect its spelling to related concepts such as < clone > and < lone > and < lonely >. It turns out that < colony > is itself a base!

Lastly, we had a presentation on the honeybee from beekeeper Mark Fletter. 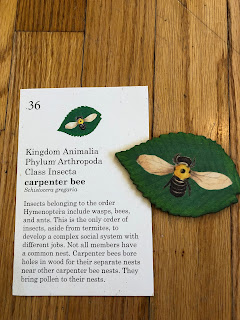 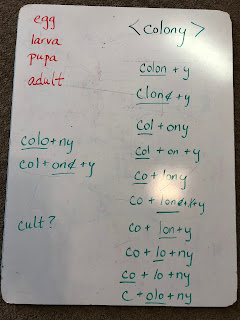 Today we spent some time on step 4 of SWI.

We looked at the words < condensation > and < colony > and noticed the letters (graphemes) which didn't correspond with the sounds (phonemes) we were expecting:

You can see the special punctuation rules that we use in SWI to distinguish graphemes from phonemes.

We had a lively discussion and children kept pulling me aside to show me their words. One little girl said excitedly, "Ms. Renee, I just found a homophone!" and proudly told me about < tool > and < tulle > on her / t / page. They weren't ready for their brainstorming time to be finished!

It was so much fun to then come together and see what the teams had discovered. (And we added another letter combination to the / t / page afterwards: < ed >, as in < trapped >.)

One of the fun digraphs for / t / is < pt >, and so we ended this session by reading P Is for Pterodactyl: The Worst Alphabet Book Ever by Raj Haldar and Chris Carpenter. 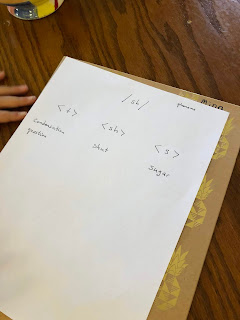 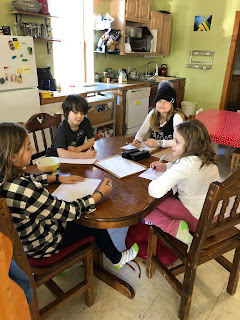 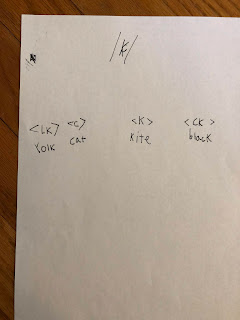 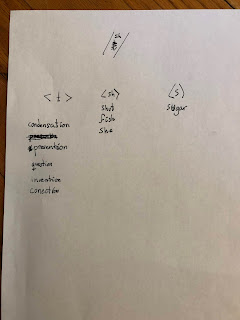 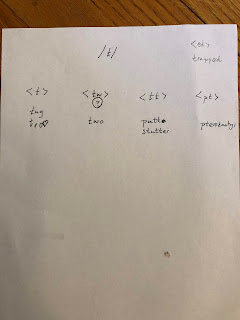 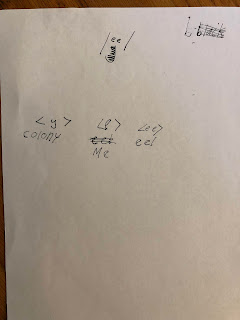 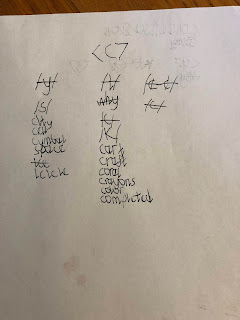 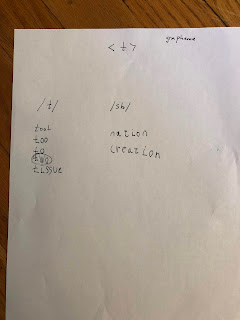 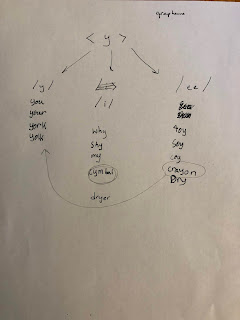 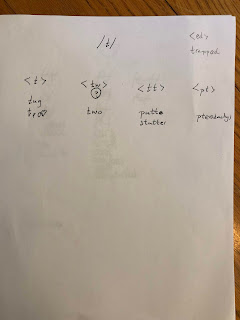 Today we reviewed graphemes and phonemes and turned our attention to morphemes (step 2 of SWI: Structure).

I shared three pairs of words which had been on my mind.

These words do seem to share a meaning connection, but they aren't morphologically related unless the longer words are made up of the shorter words plus prefixes or suffixes. Are the shorter words actually the bases here? Or do they share spelling patterns through a complete coincidence?

Do these word sums make sense:

The class broke up into three teams and then went off to see if they could find any other words which would be proof that < l > is a prefix and < ary > and < dle > are suffixes.

After lots of brainstorm time, we came back together and shared the results of our group discussions. We didn't find any evidence of < l > as a prefix. When we looked up < edge > and < ledge > we did find that they were completely unrelated; these words are both bases. Becca also asked us to look up < pledge >, which seems to contain the spelling of the other two words, and it too is a base which came from a completely different source.

And we became quite convinced that < ary > is a suffix because of words like < dictionary >, < stationary >, and < legendary >. The word < binary > was discussed but doesn't seem to be evidence of an < ary > suffix since I know that < bi > is a prefix and < n > can't possibly be a base.

The discussion, scientific thinking, and understanding that words are made up of smaller pieces which make sense and carry meaning (instead of a random combination of letters that will be impossible to memorize and get right on a test) was the most important part of today. We ran out of time to look up all of the words that we wanted to. A project for another session!

If you have a word you want to recommend for our Wonder Word list, please feel free to share it in the Comments box. And any parent in our homeschool co-op who would like to come to a session and theorize and investigate orthography right alongside us, please know that you are always welcome! 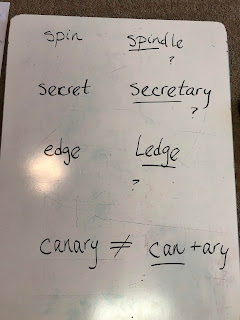 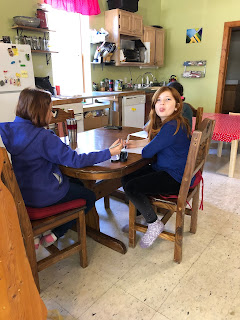 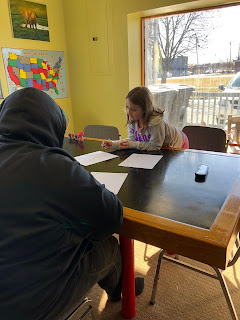 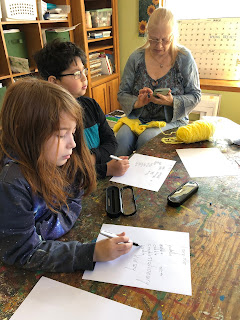 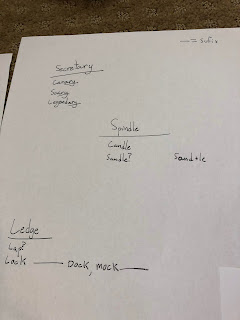 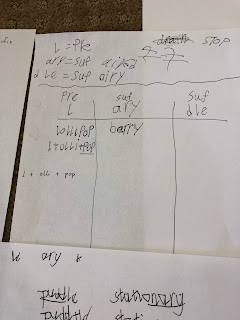 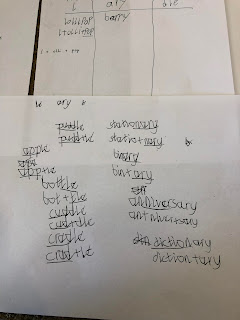 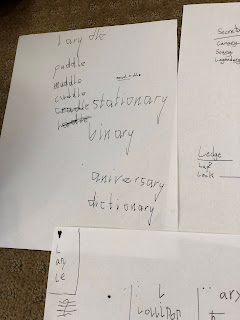 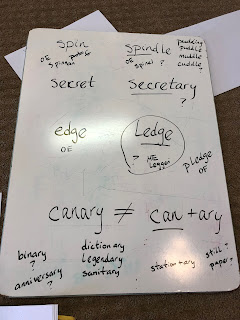 We won't have SWI for the next few weeks due to special guests & field trips for our Fibers & Clothing block, the SWI conference that I am attending in Chicago, and then Spring Break. We will resume our classes on March 22nd.