Word Bags are a fun way to do SWI with a class and easy to do at home with your child. Thank you to Rebecca Loveless for turning me on to this strategy, and for sharing some resources to do this online via Zoom!
~ ~ ~
For more on SWI, I strongly recommend reading the article
Understanding SWI: “Structured Word Inquiry” or “Scientific Word Investigation” by Pete Bowers, originator of the term.

He has explained the process and linked to lots of good examples of investigations, including videos of class discussion while analyzying a word.

In today's SWI class, we first looked at two words of student interest: peanut and hazelnut. We noted that these were both compound words made up of two bases (hold up two fists side by side), and we were amazed to see how ancient the word < hazel > is. It's nearly unchanged from Old English!

From there we used Rebecca's Keynote slides 5, 6, and 9 to look at the base < quest >, some word sums which can be make from it, and a matrix for it.

After reviewing these concepts, it was time for the Word Bag activity, slide 10. Today's word was < cycle >. When I asked "What does cycle mean?" (meaning is always the first step in SWI), he responded, "Water cycle." The young child will give an example intead of a definition. I expanded his idea, adding that the water cycle goes around and around (evaporation, rainfall, and evaporation again)... and he added, "Like with salmon also." Yes! A life cycle is another good example.

In Rebecca's slide, the Word Bag is set up so that you can move aside colored shapes to reveal each word below, then move the word into a large square if it is part of the family of < cycle >. If it was not part of the family (shares a meaning relationship and a structural relationship), we left it alone. You can easily do this with a pack of index cards and a square carpet or a tray, or stickie notes and a chalkboard, a whiteboard, or a fridge door.

The reason for the square is that it emulates visually the shape of the matrix. The words in the square are words that would be in the matrix! 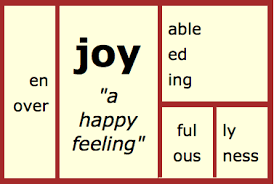 "Does it belong in the family?" is the question you ask when looking at each word in the bag.

In the family morphologically means that it shares a base with < cycle > and they would go in a matrix together.

In the family etymologically means that it is a different kind of relationship; it shares a deep historical root with < cycle >, but doesn't share a modern-day spelling pattern.

Should you want to show both options, Pete Bowers talks about placing a square inside of a circle. The word can go in the square (shares a base), in the circle (shares a root but not a base), or outside of the circle completely (not related at all). A hula hoop or a piece of string works nicely for a circle. Maybe you are lucky enough to have a circular rug! In that case, you could lay down something rectangular or square on top of your circle or oval rug.

If you want to try this with your child at home, you can make the following cards and put them in a bag: cycle, cycles, recycle, recycling, recyclable, unicycle, bicycles, universe, circles

After sorting them, maybe you can find some more words to add to either the square or the circle.

We had a lively debate about < bicycle > and < unicycle >. My young student recognized the connection with the structure of < cycle > but was not sure these words shared a meaning relationship with < cycle >. He did realize that if one was in the family, the other would be automatically. When we looked them up on etymonline.com, it became clear that they did belong in the family. He rejected < universe > right away, laughing, but was less sure about < circles >. It shared a meaning relationship but not a structure relationship. When we looked up < circle > we found it came from Latin circulus; when we looked up < cycle > we found it came from Late Latin cyclus from Greek kyklos "circle, wheel, any circular body." Thus, cycle comes to us from the Greek word for "circle" but the word circle itself comes to us from Latin. They do not share a root, so they are not relatives at all. The meaning relationship isn't enough to make them in a family (otherwise, hot dog, ketchup, pickle relish, and chips would be related!).

We ended with slides 17 and 18, which show an example of the "in the circle / in the square" setup. < Eat > was the base in the matrix. < Ate > was outside of the square but in the circle. They both come from Old English etan. But you cannot put < ate > in a matrix with < eat >... quite simply, because they do not share a base!

Here's a beautiful visual example that I found online which illustrates this: 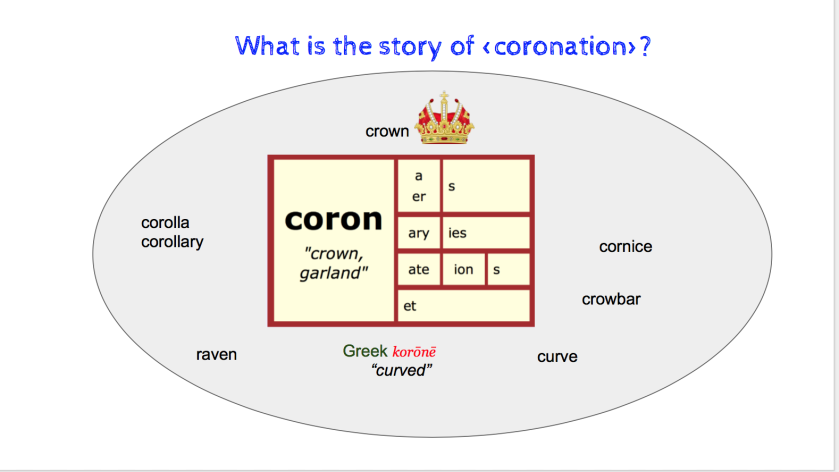 You can click on the image to enlarge it. Enjoy exploring this with your child!