Is It a Math Problem?

Our block of Math Gnome Stories has been going very well. The link is to all of our lessons and activities. I have incorporated lots of activities to try to build Math Sense in my students. This is more important in the beginning, in my mind, than facility in computation... because without knowing what you're doing and why, computing can only take you so far. One of these we did for the first time today and it is a game called "Is It a Math Problem?"

In terms of difficulty, this game is more challenging than the Silks Game, which should be introduced first and is also explained below. As you can see, I start with the newer and harder work at the beginning of each session, and then we also go back and review concepts introduced earlier in the block.

Is It a Math Problem?
introduced on Day Fourteen

In "Is It a Math Problem?", I tell a short story which has numbers in it, and the students tell me whether or not they think it's a math problem.

The reason for taking the time to do this in first grade is that we don't want students to automatically think that anything with a number in it is a math problem, or even that every number in a story is important when it is a math problem. The only way to tell that it's a math problem is to have a sense of what the four operations are, which is why it is crucial that this game come at the end of the block.

Here is an example: 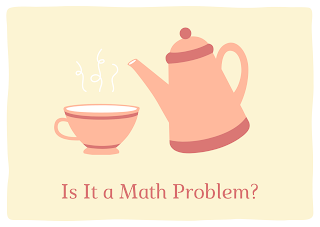 It's important that you ask them to explain their reasoning when they tell you if it is -- or if it isn't -- a math problem. Why or why not? In this case, it's NOT a math problem because it never asks us a question. We have some numbers but there's nothing that we need to do with them.

Here are some more:

I went walking this morning. I picked 13 flowers. When I got home, I put them in a vase along with the 12 flowers I had picked yesterday. What color is my hat?

It can have a question in it but still NOT be a math problem! Always think about what the question is asking. Is it an operation? Which one?

Here are a few more:

When we went Christmas caroling we sang five songs at each house. We visited ten neighbors. How many songs did we sing in all?

My big dog weighs 55 pounds and my little dog weighs 16 pounds. They both have wet noses.

You can also ask your child to convert a story that isn't a math problem into one that is. What would it take to make it into a math problem? In the last example, you could add something like "How much heavier is the big dog?" or "How much do my two dogs weigh in all?" or "If my little red wagon can carry 65 pounds, can I use it to carry both dogs at the same time?"

These are super-fun to make up, and after enough examples you can ask your child to make some up too. Then you are the one who has to answer the question, "Is It a Math Problem?" Asking your child to create word problems which are examples of each operation is a great way to assess whether they understand the fundamental quality of that operation. (Often, children will happily create addition and subtraction problems but struggle to come up with an example of multiplication or division. Practice makes progress.) Asking them to create a story which has numbers in it and may or may not be a math problem that makes sense is good assessment too.

The Silks Game is also a game of my own invention, and it is fun because it lets kids move around! In this game, you tell a math story problem aloud. Again, they don't have to solve it. Instead, they listen to hear what kind of problem it is, and then either put on a play silk that is that color (green - Plus, blue - Minus, yellow - Times, red - Divide) or hold up the correct math gnome or just hop up and act out the part of that character!

This is really nice assessment and it forces the child to think about what the problem is really asking, instead of getting bogged down in the numbers. Again, you can ask them why they think it's the math gnome they chose.

Sandy practices the piano 2 hours each day. What is the total number of hours she will practice in a week?

Ruth wants to buy a robe for a gift. The robe she wants to buy costs $32. She has $27. How much more money does Ruth need?

Mrs. Everett makes yummy chocolate cakes. To make a cake she needs 2 cups of sugar. If she has 6 cups of sugar, how many cakes can she make?

One of the simplest things about this activity is that you can use workbooks from other older children, if you have some handy, by just reading aloud the problem to to your younger child and not requiring that they solve it. Because it doesn't matter how big the numbers get! That way you don't have to constantly come up with word problems. My older students have enjoyed the Bedtime Math series, and that could be a source of word problems too.

Working with the Gems
introduced on Day Five

After we play the Silks Game for 8-10 problems, we go back and get out our wooden boards and gems and solve a few of the ones with littler numbers in them. Today we solved the one about Mrs. Hering reading to the blind, and the one about Laura sailing on the lake.

We are still learning all of our skip counting songs, so we ended by singing 6 and listening to the tune for 7.