Yesterday was our ninth session of Science Club! Only one more to go! Topic:

I wrote a blog post previously with my planning notes when doing this block on Zoom. Now I get to do it IRL with a group of students!

For each disaster I'll share my up-to-date notes and some photos. Today we learned about the John Hancock Tower (aka Plywood Skyscraper) in Boston in 1976.

for each team (set up two):

The 9" x 12" sheet of construction paper must be dry, so keep extra sheets of paper on hand just in case. You'll also want paper towels and a trashcan nearby for any eggs that hit the floor. Have extra eggs at the ready as well!

We only did steps #5-8 for this experiment. I was too nervous that my dinner glasses would go flying (even though I do understand inertia I'm more willing to risk broken egg than I am to risk broken glass). It does help to let the children rest the construction paper on the glasses (without the bottle caps and eggs) and just practice pulling it swiftly towards them first, then do the experiment. Younger children tend to be less successful in this experiment, I find, because they are nervous and pull the paper too slowly. Just encourage them and give them lots of tries.

For this experiment, the teams were 4 or 5 people (not 2 or 3). A smaller team is actually less successful because there are fewer people to cheer you on and celebrate with you... and your turn comes too quickly if you're nervous and want to stand back and watch several other people try it first. 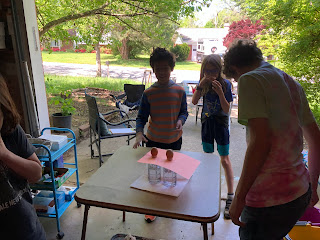 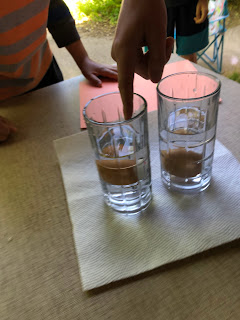 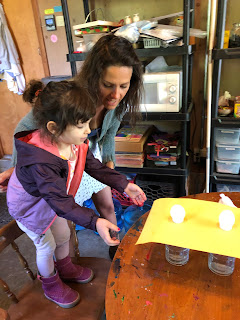 - discussion of the expansion and contraction of air based on temperature

- do Use a Bottle to Blow Up a Balloon experiment

for each group (set up one):

We did not do the ice water step of this experiment because Zac accidentally used up all of my ice cubes in his mud kitchen. We just set the bottle/balloon aside to cool back off and kept an eye on it during the rest of Science Club. 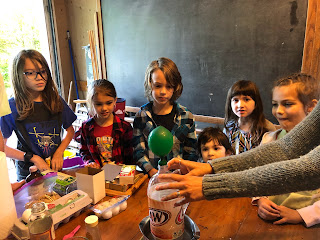 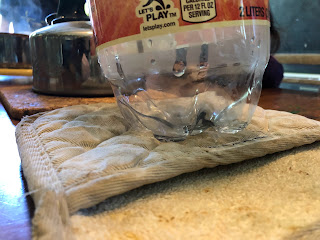 One interesting thing that we noted was that, as the temperature inside the bottle dropped, water suddenly began collecting in the base. Precipitation! Zac ran to get two beanbags and he and I demonstrated to the class our "Water Cycle" movement verse that we had been learning in Circle Time! :-)

One parent wondered, would this experiment also work with a glass bottle? My guess is no because glass is an insulator and not a conductor, but it would be interesting to find out. It would need to be borosilicate glass that can withstand boiling water without breaking, so perhaps a 2000 mL Erlenmeyer flask would be better.

- do Egg in a Bottle experiment

for each group (set up one):

This was fascinating, although we did not quite get it to work. Sam, our first egg, tried his darndest to get into that bottle. Sally, our second egg (we put in extra strips of paper to see if the fire would burn longer with more fuel), didn't do much at all. This is an experiment I'd like to do again and again until I perfect it. One parent commented that perhaps the diameter of the bottle (a kombucha bottle) was too wide and I needed one that was closer to the diameter of the egg...

I do think it would help to take the paper off the bottle so that you can see better what is happening with the matches and paper inside. Getting a nice flame is important so that you have a lot of heat, but it's getting the air to cool back off (and contract) after it was heated up that actually moves the egg into the bottle. So you can also do this experiment by pouring boiling water in the bottle and swishing it all around and then pouring it back out.

AND once we figure out the perfect size and shape of bottle, I'd love to try the “upside-down twist”!

2. Light the candles and sing happy birthday to the egg.

3. Turn the bottle upside-down and slowly move it into position above the flaming candles.

4. Allow the flames to heat up the air inside the bottle for just a few seconds and then place the bottle down over the candles. The candles will go out and the egg will squeeze up into the bottle with a “Pop!” 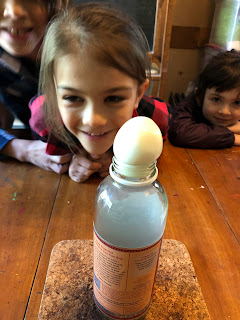 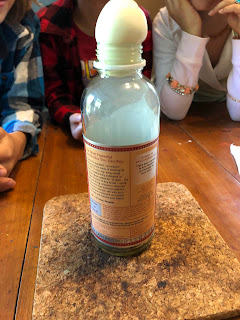 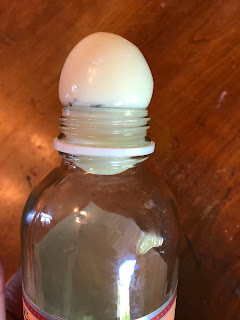 we drew a line on him with Sharpie to try and see if he was still moving...
but ultimately we decided he was stuck 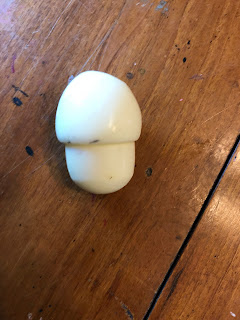 - pass out Science Club notebooks, have each child draw and write notes about his/her favorite experiment or about the disaster itself 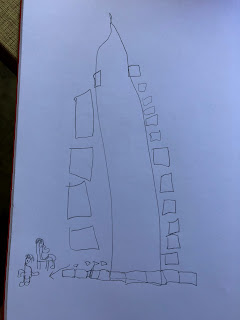 My First Graders are on their final block of the school year (a Science block on the Four Elements: Earth, Water, Air, Fire ). For Air t...