The Fox and the Grapes

I can't believe how quickly the school year has come to an end! I'm going to backtrack a bit and post my notes from our last few fables.

retold by Ann McGovern. It's also the fable which is illustrated on the cover.

This one was more subtle for students and many struggled in their retelling to express the moral (it is easy to despise what you cannot possess). They all understood the story, however! After I told it, we went out onto the basketball court and I told them that the woven basketball basket which was hanging above their heads was the cluster of grapes. They stood in line and each had a turn to be the fox, leaping over and over in vain and finally walking away in disgust. The students loved this acting out of the story. Previously, when I taught Fables as a summer camp, we did a moving picture version of this story with the background scene done as paper collage and a paper fox on a popsicle stick which moved up and down through a slit cut in the the paper background. That was loads of fun.

If you're interested in moving pictures, there's a new book at Bob & Nancy's which specializes in this called Making Picture Books with Movable Figures by Brunhild Müller: 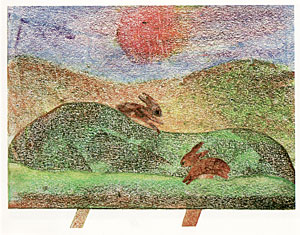