Here was our first "Maths of Practical Life" Measurement topic: Time. We spent Thursday and Friday on Clocks and Monday and Tuesday on Calendars. 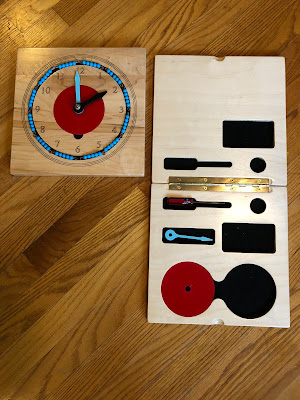 * Below is an excerpt from a blog post in 2018 where I wrote up a description of the calendar lesson I've developed over many years of teaching it in Montessori schools as part of the Fifth Great Lesson:

The first material is something I invented after years of having students NOT understand why a lunar calendar isn't the same as a solar one, and why it gradually gets out of step. This is a finger knitted string consisting of 4 yards of yarn, in four different colors. Each color represents a season. A large green button is tied onto the string where the first day of Spring would be. Since the lunar calendar gradually gets out of step with the seasons, 11 days each year, I have a series of white buttons. These represent the lunar calendar and where it says the first day of Spring should be. We lay the buttons down, moving the lunar calendar's supposed "first day of Spring" further and further into Winter, showing how the calendars get out of whack a little bit at a time. This starts to make a big difference after a while! The cumulative effect of the 11 days adding up is clear to students because they can SEE it, and I leave this out in the middle of the floor and keep reading. Every time I get to a culture which had a lunar calendar and had to keep making adjustments to it (the Ancient Egyptians were the first to switch to a solar calendar), I point to the little white buttons. And it seems to work!

In the middle of the yarn circle I placed my second demonstration. This is ten colored index cards with the original Roman months on them (Marius, Aprilis, Maius, Junius, Quintilis, Sextilis, September, October, November, and December). I have already prepared four more index cards of a different color which will show the changes to the calendar (these are Januarius, Februaries, Julius, and Augustus). When I explain that the Roman calendar, which was originally a lunar calendar borrowed from the ancient Greeks, got more and more out of whack, and that they had to add two months to the beginning to bring it back in step with the seasons, I lay down Januarius and Februarius, and when I explain the egos of Julius Caesar and Augustus Caesar, I replace Quintilis and Sextilis with Julius and Augustus. This is very satisfying for me because I remember as a child being puzzled that October has a prefix which means 8 but it is month #10 and December means 10 but it is month #12! Knowing that they had to do a +2 and chuck two months on the beginning of the calendar at some point makes it so much more clear.

Please let me know if you have any questions at all. It's NOT hard one bit to make a calendar string. All you need is four colors of the same weight yarn (I used Paton's Classic Wool Roving), a floral or green button to be the first day of Spring, a bunch of white buttons to be the start of the lunar calendar, a yardstick, and an eager first grader who wants to help out by doing all the finger knitting. If you make each season's piece one yard long, your solar calendar will be perfectly to scale with one centimeter equalling one day.

This lesson works! The combination of visual and hands-on really helps make the abstract difference between the solar and the lunar calendar year become concrete and clear. 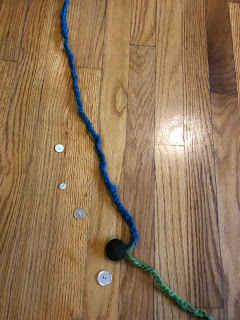 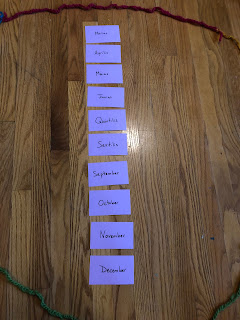 the original ten months of the Roman lunar year 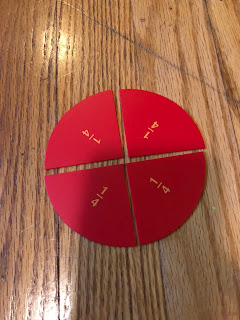 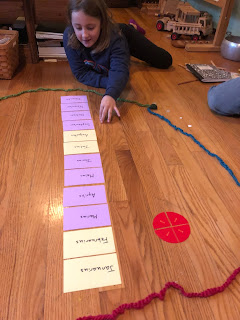