The week of Monday, October 19th we did another long-time favorite, "The Gigantic Turnip," and some activities around the idea of the Harvest.

Harvest here has been minimal, since I didn't keep up with my vegetable garden and most things either got covered by weeds or died from lack of watering. I'm quite a forgetful gardener. We do have lovely basil still growing in the Pollinator Garden, though! So we have eaten some of that. And we have steadily been picking cherry tomatoes from our collection of heirloom plants. When the radio said that a frost was expected, Zac harvested all of the remaining green cherry tomatoes. Of course, we also harvested our volunteer pumpkin (which Zac used as his entry for the Book Character Pumpkin Decorating Contest at the library).

And Zac has been collecting persimmons every single day since October 8th from under the persimmon tree. The very first day the Magnolia Tribe students were here we found a persimmon! The kids were very intrigued. And the tree is still loaded with them. Happily, they drop right into our new Peace Garden where they are actually easy to find because I cut down all of the overgrown weeds and spread a layer of mulch (so that the Dragon Eye Mandala could be made in a safe little spot). This clearing-out has made finding persimmsons super-easy! It was harder when it was a Rose Garden. One day Zac was really excited because he found nine persimmons!

You never pick persimmons from the tree. They aren't ripe then (and you will get a really uncomfortable feeling in your throat if you eat an unripe persimmon). You have to pick them up from the ground. They are sweeter after a frost, so we always collect them from the ground and put them whole in a freezer bag and put them in the freezer. Then when we have enough, we thaw them and push them through a mesh strainer (so the skin and seeds, which are very large, stay behind) and then use the pulp in recipes.

Today was the deadline for the Book Character Pumpkin Decorating Contest at the library, so we did that as our "Harvest" activity. Zac wanted to do Jimmy Skunk, the main character from our last bedtime read-aloud story, The Adventures of Jimmy Skunk by Thornton Burgess. (Zac was on a Thornton Burgess kick for a year! Last year his entry into the contest was Reddy Fox.) We also read The Secret Life of the Skunk by Laurence Pringle to learn more about the skunk, and so we could see some more pictures. 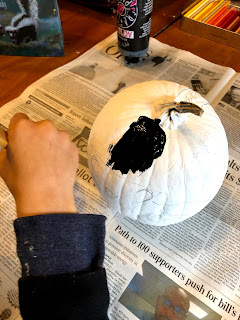 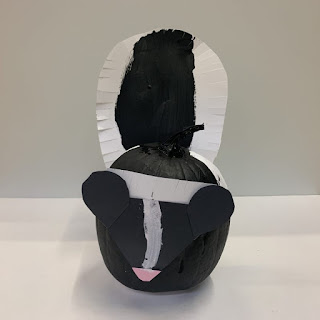 Halloween is, of course, on the way. Tinkergarten has a great idea for a Witches Brew which you make in a hollowed-out pumpkin. So today we did that. Hollowing out a pumpkin is a LOT easier to do outside than inside on the kitchen floor. You don't even have to spread out any newspaper!

Zac wanted all the seeds and "pumpkin guts" for his mud kitchen play, so we just scooped everything out into one of his old pots. Then you fill the hollow pumpkin with water, let them collect Nature items for the brew ingredients, and add "magic ingredients" at the end so that it bubbles. Those magic ingredients are baking soda and vinegar. Clever! And it was a nice use for the cute little bottles of vinegar which I keep getting from Hello Fresh.

This twist on mud kitchen play kept him occupied for a long time. 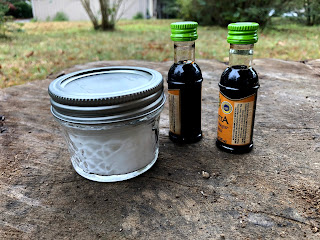 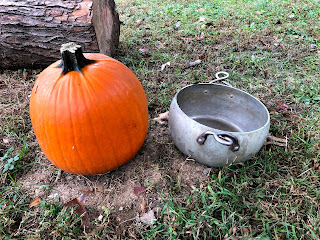 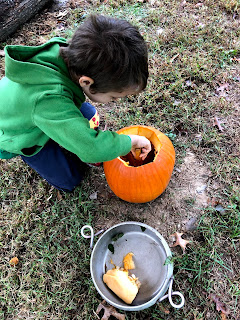 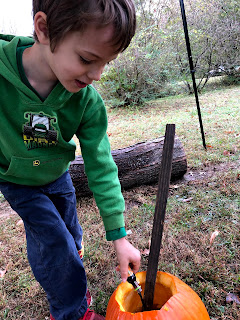 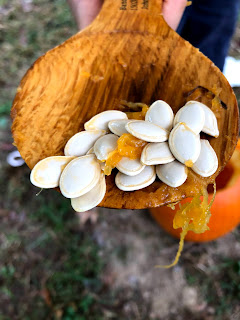 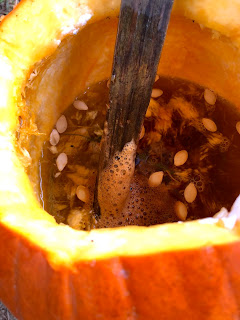 Zac's request today was to rake leaves! So I set aside what I had been thinking of (which was making Crockpot Applesauce as our Harvest activity) and we just did that. I have really nice child-sized leaf rakes from For Small Hands, which is a Montessori catalogue. We have both the yellow metal leaf rakes for ages 3-5 and the bamboo ones for ages 6-9. He raked a big pile and jumped in it quite happily.

The 1 1/2 dump truck loads of mulch is still a pretty high mulch mountain in the yard, so he jumped in that too. I got all of that mulch for the school kids to climb on. I had a half dump truck load delivered for myself, so that I could mulch the paths in the yard and the gardens, but they were so thrilled with climbing on it that I had some more delivered. I will have to do a post of photos soon, because I haven't in a while. Seeing twelve year olds jumping happily in mulch alongside five year olds is a great thing!

It does seem that our Outdoor Classroom won't be used for the next few months, sadly, if the COVID situation is going to be as bad as is predicted. In that case I will mulch the paths and gardens as planned and then get a new delivery for playing on when the weather warms up and things resume in person. I took down our pop up tents and moved the straw bales into the garden to be for planting in in the spring. I can always get new straw bale seating again. It is nice to have open-ended things in the yard, that can be play things and also used in other ways as well. I would love to get a huge pile of rocks too! Kids seem to love transporting and building with rocks. And then, again, when the play phase has finished I can use them in landscaping.

Zac also had fun on Wednesday using some of the smooshed persmimmons that fell in his mud kitchen, and opening them up to see the large flat seeds. I am still planning on some Harvest recipes, besides whatever we do with the persimmons in the freezer. Crockpot Applesauce and Pumpkin Chocolate Chip Cookies are what I'm thinking of right now, as well as some bread recipes that I wanted to make but haven't gotten to (Icelandic Thunder Bread and Michaelmas Dragon Bread). I do think we might have missed the boat for Zucchini Cake with Sour Cream Frosting. Oh well...

This is a classic Russian folktale. There is a simple retelling of it in the Autumn book by Wynstones. I used a wooden "stable" which I got from Nova Natural many years ago, a green embroidered flower silk which my mom brought back from Vietnam, a set of wooden figures for this story carved by Anne Moze, and a needle felted gigantic turnip which I made myself. I also needle felted a little mouse since Zac accidentally pulled the tail off the one Anne made and it's now in my mending pile.

The plot of this story is so simple for kids to learn that they really gravitate towards using the figures themselves afterwards to practice telling it. 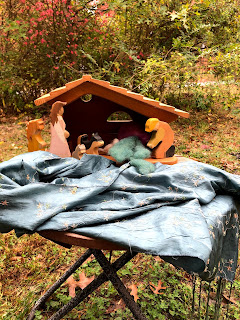 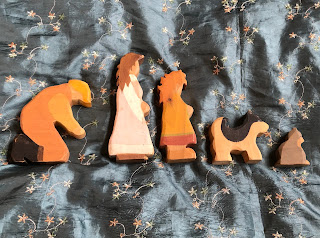 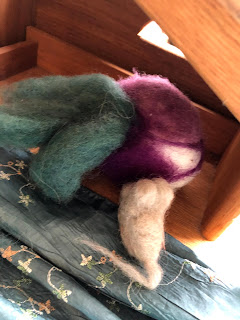 #1 - "Looking Through the Garden Gate" verse
from The Breathing Circle, page 94

#5 - "The Squirrel" finger play
from A Child's Seasonal Treasury, page 49