I'm going to start with the Book Share Notes that got me thinking about this all over again. Our Book Share time each Wednesday at 2 pm is a fun & social weekly Zoom chat to help our students stay connected to one another while they're apart. It's always great to hear what other people are reading!

Honest Pretzels: And 64 Other Amazing Recipes for Cooks Ages 8 & Up

My Gym Teacher is an Alien Overlord

by A.A. Milne
we have a beautiful old edition from 1945 which I treasure 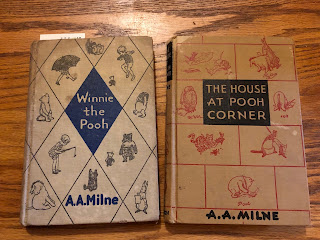 Winnie-the-Pooh was Zac's share. It was incredibly sweet to see him earnestly explain what happened in the first chapter and talk about "the bear," with no idea that everyone else in the meeting knew a LOT about Winnie the Pooh and all of the characters. And that most people in this country do. And that there is a movie and a TV show and toys. There's so much stuff related to Winnie the Pooh that you can buy.

To Zac it was just his new bedtime story and he shared about it innocently.

Zac and I started reading chapter books at bedtime when he was three (the Tiptoes Lightly series by Reg Down). I made a blog post listing them all. When he turned four we switched to the Old Mother West Wind books by Thornton Burgess. And I made a blog post listing all of those. After a year and a half (22 volumes), he was ready for something new. So it's time for A.A. Milne!

I was talking with a parent the other day about how important it is that children build up the capacity to make mental pictures of what is happening when they are being read to. Without this crucial skill, it hard for them to love reading! Students who can't form mental images also struggle with difficult texts when they are older, such as in high school.

I recommend beginning to share longer read alouds to your child when they are young, while still doing picture books and puppetry as well.

I fondly remember my mother readng me A.A. Milne (the two chapter books and the two books of poetry). I can even hear her voice in my head from 40 years ago. And I am so eager for Zac to hear that beautiful writing. But...

Although I love the books, it was a bit of a philosophical stuggle for me to make these characters known to him, and this marketing to kids is why.

Zac is five and a half now and I have successfully kept him away from all television shows and movies. He doesn't know any of the characters from TV and the movies (which always makes it so weird when someone tries to give him a sticker). He has never pestered me for any product with a recognizable character on it because he doesn't know what they are, and I love that. He doesn't know who Nemo is and I'm glad. I think it is really sad when a little child is in the pet store hollering "Nemo" at a tank of fish.

The WHO says limited or no screen time under the age of five. To be honest, Zac has seen a few episodes of Salsa with Becca when she was learning Spanish, and a 15 minute documentary on Beavers. And I am considering whether he is old enough for March of the Penguins.

March of the Penguins

I guess he's very sheltered. But it makes our life so so peaceful!

It has always really shown up -- the fact that we are not part of the typical American culture -- when we go to do errands. Of course, it's even weirder to be out and about now, since we do so few errands because of COVID. Then, I feel like I live in a little bubble or under a rock somewhere. To see what our culture considers normal to expose a child to. To see the assumptions they make about our home life and my parenting. To be around other people and see what they say to my child.

The person who did our COVID test asked him if he had a girlfriend. He's 5. The person who checked our temp at the pediatrician joked that Zac was a zombie. ?????? And when he was offered a sticker after getting his flu shot, they asked him what his favorite superhero is. And I always have to say gently, "He doesn't know who any of those people are. Do you have any animal stickers?"

I mean, Zac calls the wild animals by their names from the Thornton Burgess books (Jimmy Skunk, Happy Jack Squirrel, Lightfoot the Deer, Bobby Coon, Peter Rabbit, Striped Chipmunk, etc.). But to me that is adorable. If someone was selling me Thornton Burgess breakfast cereal and Thornton Burgess pajamas, I wouldn't feel that way.

It is so weird to me to be on this side of the divide, actually, because as a child I grew up without a television and I absolutely hated it. I hated being in school and not knowing what everyone was talking about. I didn't know the difference between Star Wars and Star Trek. I never saw Blossom or Dougie Howser or Mister Ed. I never saw Goonies. I just felt so out of the loop in public school all the time. And I was miserable. I remember that from the child's point of view.

But as an adult, I absolutely detest products that market branded toys, clothing, foods, etc. to children. I think it is so unethical. So by keeping Zac away from those branded things, I feel I am keeping him protected from evil corporate brands that see him only as a dollar sign, instead of as a person.

What Kim John Payne wrote in Simplicity Parenting about how marketing seeks to overcome parent resistance by training children to pester, wheedle, beg, scream, and throw tantrums has really stuck with me. They refer to a child's loving adults as "purchasing friction" and there are entire seminars devoted to how to keep the products moving in spite of this friction by marketing directly to the children themselves. It was horrifying. 16 billion dollars a year is spent on marketing to kids.

I do feel there are a few appropriate exceptions that wouldn't lead to falling completely down the rabbit hole.

I think the current marketing for Sesame Street is way over the top, but I did like the old movie Don't Eat the Pictures. We may watch it some time. I have it on VHS (which means I would have to lug the TV out of the closet).

We did read all of the vintage Curious George titles and Zac discovered he had a Curious George shirt in his drawer (a hand-me-down). He was pretty surpised and excited.

But with me beginning to read him Winnie-the-Pooh, we will definitely enter that phase of encountering marketing out in the world a little bit more. If nothing else, he may notice the art on the baby wipes in the Art Room!

I don't know... it's so hard when something has educational value and a yucky side to it too.

Thanks for valuable insight, may I ask how will you approach this when he gets to know about these characters and want to watch them all the time? I won't lie I have problem with screen addiction at home. My 4 year old asks for it as kkn as she be wakes up till night. I feel I am the only one saying no I had multiple discussions with my family about this but it go me nowhere. My husband sbnd works from home so automatically switches TV on so he can work, this got worse with covid and we were all in lockdown. My parents are the same. I feel I am ruining my child.

Digital Books to Use on Zoom for SWI

You tell I'm on vacation! Posts and posts of lists. I'm trying hard to keep my mind clear and relaxed, so I'm writing things d...