SWI Recap: How We Got from There to Here

For our final SWI session of the school year, I invited the children to bring in any word that they wanted to examine. When we sat down together that Friday morning, every child had a word. And, even though we don't analyze proper nouns in SWI, one child had brought a name to share because he noticed that it contained one of the Old English letters I had taught them, ash (æ).

And they divided into pairs and happily dove into their investigative work! We came together after 40 minutes for everyone to share what avenues their team had explored, their discoveries, and any questions they still had.

You'll never believe this, but < pneumonia > and < pneumatic > DO NOT SHARE A BASE. THEY ARE NOT RELATED. It was an incredible discovery! When I wandered over to their table, this group asked me to help them create draft word sums for < pneumonia >. I was so sure it would relate to < pneumatic > (drills, brakes, and so on which are powered by air) that I confidently told them so and we posited a < pneum > shared base.

Turns out that < pneumatic > comes from Latin pneumaticus and, if you know your Latin suffixes, you know to drop the -us leaving < pneumatic > as the base. Spelling preserved and passed down from antiquity. The Greek word prior to that historically was pneumatikos which meant wind or breath. 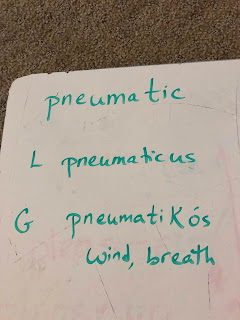 In complete contrast to this, < pneumonia > comes from Latin pulmo (you can see this word's relationship to < pulmonary >) and this was from Greek pleumon which meant lung. Over time, Latin speaking people noticed the meaning connection between wind/breath and lung, and so the Latin spelling slowy changed to reflect this. The Latin word then became pneumon. The one word actually influenced the other! The spelling gradually morphed to reflect this connection in meaning, yet when you look back to the Greek roots you find that these two words are actually not related. Fascinating! 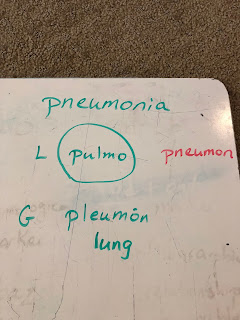 So, how did we get here?

How are eight Lower Elementary children confidently and joyfully doing authentic linguistic study with only a small amount of guidance from me?

At the start of our SWI work in October, I was so nervous that I spent the first two weeks on the Story of Written Language (the Fourth Great Lesson in Montessori). Yes, this laid an excellent foundation (scribes, printing press, etc.) but it also was well within my comfort zone.

When it came time to actually dive into a lesson, I was so intimidated I had us watch a YouTube video. Yep. If you know me, you'll know how unusual that is for me. But we started with what Gina Cooke had put on YouTube as a very small introduction of the concept of investigating words scientifically and expecting the English language to be well ordered and make sense. The very idea that there's a logical reason for each choice made in our spelling system is eye-opening enough itself!

Then, just like the Little Engine that Could, we slooooowly made our way up the hill.

And we did it together, the students alongside me, because we were all learning at the same time. Yes, I took several online courses with Pete Bowers and then some in person workshops with Gina Cooke and Doug Harper, but that all happened gradually over the course of the year. My first step was introducing SWI as a month-long Waldorf main lesson block (3rd grade Spelling & Grammar), and then offering it weekly on Fridays as a Special. In Waldorf this could also be part of the Extra Lesson work for students who are struggling -- and it is wonderful for dyslexia -- but, really, all students should receive their spelling instruction this way. As Pete says, sarcastically, "To whom should we mis-teach the English writing system?"

If you are facing being the first SWI teacher in your school or homeschool, and want to join me on our retrospective, here's how it all went down: