While the Baby Wolves group has been deep in the Waldorf Capital Letters main lesson block, the Red Pandas have been working on the Montessori side of things, with a Language Arts focus on Grammar and Sentence Analysis. 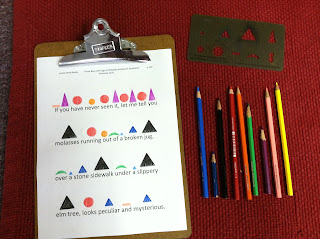 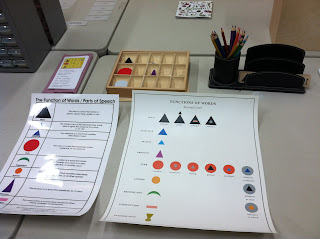 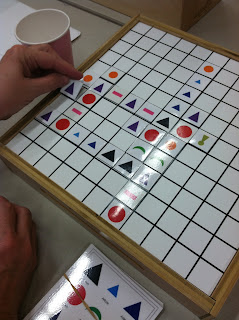 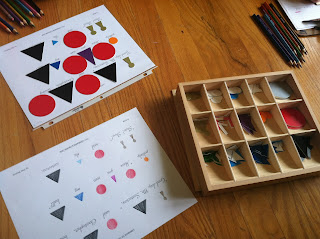 Montessori Grammar work is hands-on, color coded, and designed to be self-checking, of course! We have lots of Grammar materials on the shelves:

The focus of this block has been to get everyone comfortable with this material so that they can continue to put it in their independent work time for the rest of the year and, for those who are already familiar with the colors and symbols for each part of speech, to introduce new concepts. 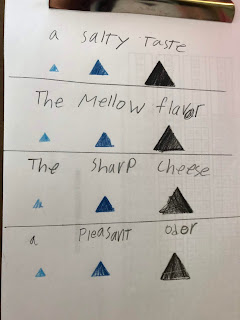 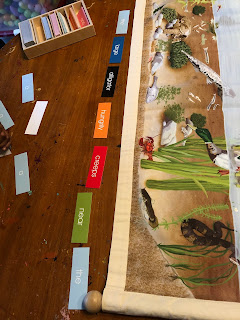 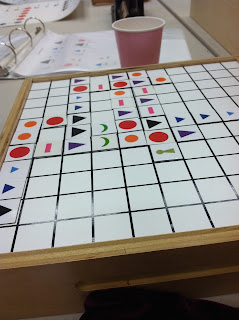 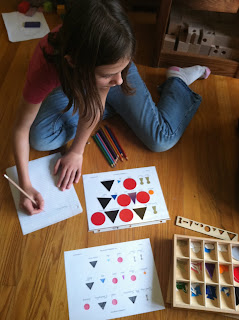 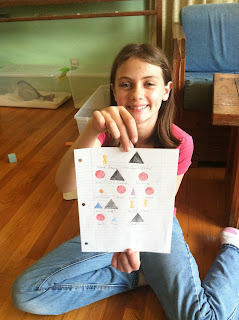 The large black equilateral triangle represents the great Pyramids of Egypt. Their solidity and enduring nature capture the essence of the Noun perfectly.

This was followed by the Verb Family (a group of circles). The large red circle for Verb was chosen because the Sun seems to be in constant movement. Thus the Sun represents the Verb and its idea of action. Related but less important is the Adverb, the small orange circle. 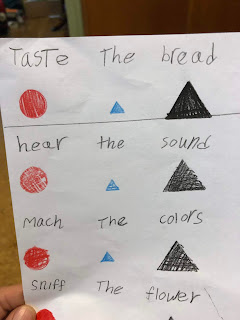 Then we went on to the Preposition (green crescent) and worked with the idea that it is always found in a Prepositional Phrase. Never end a sentence with a Preposition! The last two symbols are the Conjunction (pink bar) and the Interjection (gold keyhole).

The entire Elementary class has been practicing this introduction to the nine grammar symbols through a combined Art & Language Arts project, the Haunted House of Speech. We do this lesson every single year in October.

I cannot take credit for this one... it was the genius idea of my colleague in Maryland, Ms. Denise!

Students carefully trace a large Victorian house template and then add as many details as they wish. For each detail they add, they must write the word at the bottom of the paper under the correct symbol for its part of speech. Thus, if you draw a ghost, you write Ghost under the symbol for Noun, Scary under the symbol for Adjective, etc. My students have loved this work for years and it is a perfect way to practice these parts of speech! 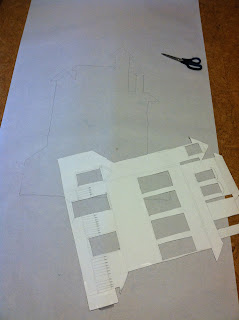 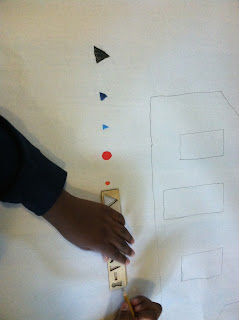 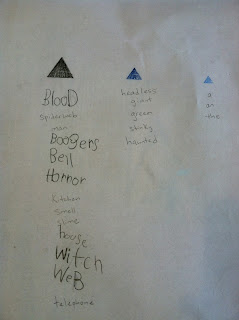 So, for those who are doing this in a main lesson block as well, all of the parts of speech, their definitions, and sample phrases and sentences with each word labeled with its colorful symbol have all gone into the MLB.

Montessori Language Arts work encompasses more than just the Grammar symbols. There is also extensive Word Study material, which we have:


And there is Sentence Analysis, which is like diagramming sentences. I am using the Making Sense of Sentence Analysis material from Mandala Classroom Resources and their Sentence Analysis Template (the stencil which is used for Sentence Analysis). Like the work with the parts of speech, this involves asking a series of questions to figure out what job each word is doing in the sentence. We began on Thursday, October 24, with Chart I, Box I sentences and Logical Analysis Form 1, asking the three questions


What is the action?

We will move into learning about Direct and Indirect Objects next week.

Of course this is just the beginning!

The in-depth Nienhuis Montessori Sentence Analysis work consists of many more questions which are asked, but the Mandala lesson plans argue against all of the arrows on the traditional wheel, shown below, since many of the arrows which are color coded orange (Adverb) ask questions that actually lead you to something that would be green (Prepositional Phrases). 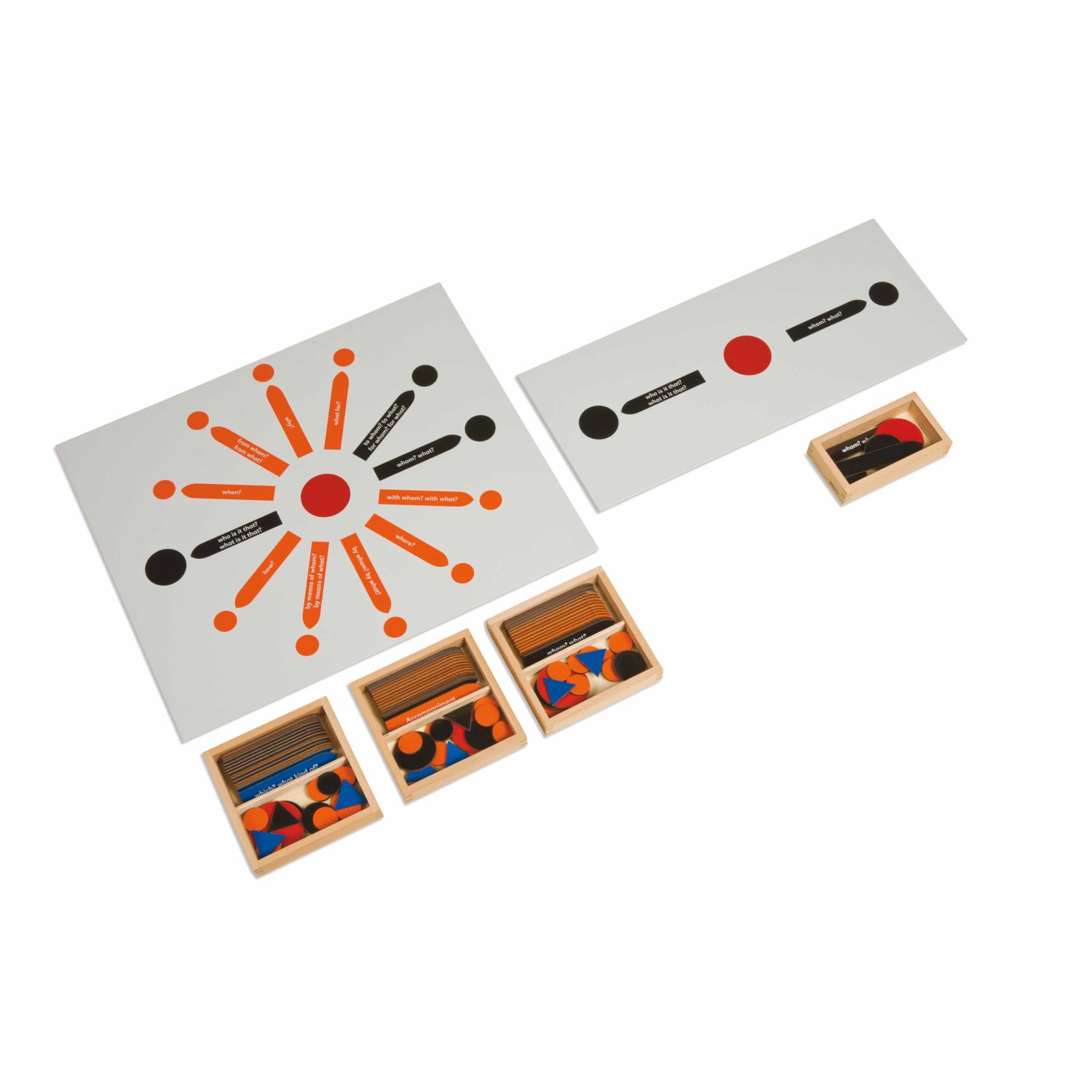 The people at Mandala have created some new Working Charts which I really like. And, since I won't be purchasing the set shown above, I decided to handmake my own Sentence Analysis material, which is really exciting!

We were incredibly fortunate to get a donation of many laser cut wood parts that were "scrap" from a local business, but which are like a treasure trove of amazingness to me and the students (and the Art teacher, Ms. Anna).

Among those "scraps" were many different sizes of circles and triangles, plus some arrows. So I am currently dyeing them the correct colors to be used in Sentence Analysis and I'm excited to show this hands-on material to my students on Monday! I'll put together another post with photos & directions.

Hello, this is Paul Hammond part owner of Mandalclassroom.com We really like this blog. We noticed a few of our product links no longer work because they are linked to our old website. If you could put in the new link here they are:

I do not now if it is okay to post about our products but we also provide an unbreakable Grammar Template that teachers love so check out our website for more info.