Starting Our Lessons in SWI

Last year was my first year teaching Structured Word Inquiry, after two years of observing lessons by my colleague, Shawna Pope-Jefferson. In addition to watching Shawna, I took multiple workshops with Pete Bowers. And... yet... I was really nervous!

We actually started out last year in October by watching two excellent TedEd videos by Gina Cooke. They are a great way to see how our English spelling system could be approached differently. Please take a minute to watch them!

I did like doing a main lesson block of SWI in October because then you can continue it as a weekly Special throughout the year. We do it on Friday mornings at 10 am. Any interested homeschooler is welcome to join us! 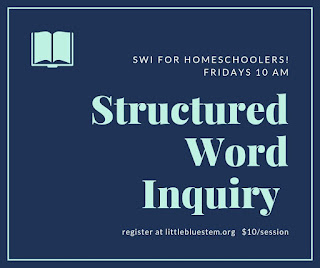 The thing with SWI is that it applies the Scientific Method to an exploration of our spelling system, so there's no progression to the lessons... it's a way of THINKING about the spelling system, not a list of concepts to cover. There isn't a set curriculum. And there shouldn't be, so don't try to create one!

You can literally pick any word you are interested in -- or, better yet, your student is interested in -- and dive in. Don't worry about explaining commonly found patterns in advance. If they are commonly found, you and the children will naturally run into them over and over. Don't worry about words that don't do what you think they will do. That happens in Science all the time! Just follow the four steps in a true sense of joyful curiosity combined with disciplined scientific inquiry (don't just guess why a word is spelled the way it is and then not bother to look it up) and you will be fine.

With all of that being said, where to begin this year?

Having just finished up a block on Landforms & Water Features (in Waldorf education this is part of the 4th grade Local Geography, History & Industry), I decided to begin with a review of the Rock Cycle.

Consider yourself forwarned when I say that SWI is addictive and you can easily spend the rest of your career learning more about it and going deeper. Gina Cooke is just finishing her doctoral thesis which I'm sure is brilliant (she is a world-renowned expert in this field). Gina can speak both Old English and Middle English. I also know a woman who got so into this that she learned both Latin and Greek. However, there's research showing that this approach works extremely well with dyslexic students (and, no matter what, it helps everyone) and so it is well worth learning about as a teacher and/or homeschooler. Don't feel it's beyond you or beyond your child. It is not.

But do know that I'm just giving you a brief overview...

The Four Steps of SWI are these:

What does the word mean? You have to begin there because the spelling carries the meaning. It is not true that the primary job of the English spelling system is to represent sound. The primary job of the English spelling system is to represent meaning. As Pete says, the fact that we have so many spelling patterns that can represent a sound in English is not a bug, it's a feature. When you want to know why a certain letter combination was used for a sound, look back. There's a reason for it. And that reason is to show its connection with other related words. (You can see this most easily in homophones. For example, the < tw > in < two > helps you see its relationship with related words such as < twist > and < twine > and < twirl > and < between >, etc.) The BIG IDEA here is that the English spelling system makes sense. It's not true that it's the worst language ever and it is full of puzzle words and nasty tricks and it is simply your bad luck that you were born into it. IT MAKES SENSE.

How is this word made up? This is the draft word sum step, the favorite step of the students in my class. Coming up with a possibility of the base plus the prefixes and the suffixes. We use actual plus signs between the morphemes. When we put a draft word sum on the board, we underline the possible base. We look for evidence that that is a base by trying to come up with other words which share that base (and which carry a similar meaning). Remember, the spelling carries the meaning. And we look for evidence that our prefixes or suffixes are true prefixes and suffixes by coming up with other words which share them. It is fine to have multiple possible word sums.

There are two kinds of history. Morphological relatives share a morpheme... that is, they share a base. And etymological relatives share a root. That is, way back in time they came from the same Greek or Latin or Old English root and so there's a meaning relationship but it was too far back in history for a modern-day shared spelling pattern. This is the step where we look up the word in question in the Online Etymology Dictionary researched and written by Douglas Harper. We then can go back and figure out which of the draft word sums was correct, or if none of them were!

What graphemes are being used to represent the phonemes here? Unlike traditional spelling instruction, we look at phonology last. It is inextricably linked to the etymology and morphology, so why look at it first without the context of the other pieces? But we do have explicit phonological instruction at this final step, so don't worry. It still happens! But the why of it all happens first.

Pete coined the term SWI and created the Four Steps, and in his original research article SWI stood for Structured Word Inquiry. But he has told me that some folks use it as an acronym for Scientific Word Investigation and he's fine with that as well!

Ok, this is easier to understand with an example. So now I'm going to talk about this week's session.

I looooove finding creative ways to put what I want into our school day!

(Yes, I know that I'm the lead teacher and the director. Technically I could rearrange things whenever I want and I don't have to ask anyone's permission. It may seem funny that I'm working so hard at finding creative ways to make things work and be kosher when I put them in the "wrong" time of day. But I think it is healthy for our week to have a steady rhythm so I insist on maintaining it. I'm not ok with bouncing around incoherently.)

I wanted us to eat the artichoke on a special day and not as part of Stone Soup, so that we could really enjoy it properly, so I popped it into the SWI timeslot and decided to make it fit by investigating this word after we ate it! Pretty clever, huh?

And, actually, I had some sincere questions about < artichoke > and was interested in exploring it! So it was authentic.

When we want to investigate a word we put it in angle brackets. You'll notice that and a few other punctuation conventions throughout the SWI world.

Step 1, what does it mean? We knew that. We had just finished eating it.

Our draft word sums for < artichoke > began probably with what you are also thinking of. The kids were looking for the word < choke > to be the base. Is there a meaning connection there? Maybe. It does have prickers on the leaves and it's hot because of the steam and there is that fuzzy stuff on heart that you have to scrape off. It is possible that you could choke on it.

Then we couldn't figure out if the < i > was a connecting vowel letter or part of a prefix or a base, so that was problematic. Here's what we came up with:

Possible evidence for an < arti > prefix was < article >. And I came up with < artich + oke > but then immediately rejected it the second that it came out of my mouth because there's no evidence for an < artich > base (can you think of any other words built off of that base???) OR an < oke > suffix. And, of course, the whole word could itself be a base. That happens.

So, in Step 3 we looked it up. And, guess what? The whole thing IS a base!

Italian articiocco, which came from

Old Spanish alcarchofa, which came from

Ok, so after figuring that out we went to the other planned word for today's lesson, < igneous >. We reviewed Step 1, what does it mean? And we started on into Step 2, its structure. This was an interesting discussion!

Again, I invite you to give it a whirl mentally before reading the answer.

If < ign > is the base, which is what I anticipated, there would have to be other words built off of < ign > that carry a similar meaning of fire.

However, when we looked it up in step 3, guess what? It's a base.

I was so surprised! It's rare for all the words we do in a day to be bases.

And that now makes me now very curious about all of those < ous > words I listed before...

But, even more interesting than that, was what else we found in etymonline. Yes, igneous is a base but there's another entry implying that AFTER it came into our language, we reverse-engineered a morpheme out of it (igneo-) so that we would have a morpheme that meant born of fire.

Well, that would really be cool. < Aqua > is the base of < aqueous > and so people made a morpheme out of < igneous > that they could then use in other words about fiery things? I have heard of reverse-engineering a morpheme before so I know it can happen. Gina talks about it in the Onion video with < lone > as a new word mistakenly coming from < alone >.

That idea tied in so perfectly with the special guest we had that morning from 9:15 to 10 am. Dav Glass, top computer programmer for Verizon / Yahoo, came in to tell us about the Hackathon at SIU Nov 2/3 and we had talked quite a bit about technology. When people invent new things, they need to name them, so they usually find some new combination of morphemes that hasn't been used before and which will carry a rough meaning of what their invention does (telegraph, telephone, television, etc.).

And so here we see a word which came wholly to us from Latin being chopped up and truncated so that we would have a new "little bit" of language which could be a building block of new words about fire. Fascinating.

After all of that hard mental work in linguistics it was time for something balancing. So we finished up our morning work time with 45 minutes of Knitting. The classroom was perfectly silent as the students all enjoyed just sitting and working with their hands, letting the muscle memory kick in, making their sweet fuzzy kittens and chickens.