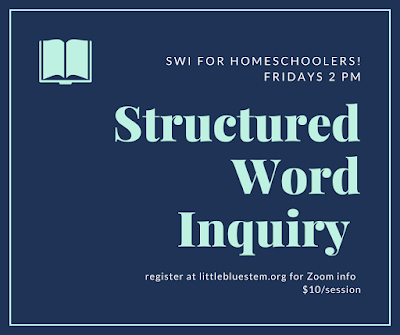 Last Friday in SWI I met with two boys who had never done any Structured Word Inquiry before. They wanted to analyze the words < dog > (which comes from Old English... but prior to that its origins are shrouded in the mists of time) and < metamorphic > (which comes from Greek). It was FUN!

There are wonderful people with whom to study, such as Rebecca Loveless, Pete Bowers, Fiona Hamilton, Emily O'Connor, Gina Cooke, and Michel Mira-Rameau.

They are all around the world but you can meet with them on Zoom. I just finished a course with Rebecca and am about to take courses with Gina (at LEX) and Fiona (at wordtorque; new July workshop dates just announced).

You can also find opportunities to do SWI every day, with whatever words interest you.

The best thing about SWI is that there is NO Scope & Sequence. You begin with any word and dive in.

Yes, your understandings will gradually deepen as you go. Pete says that you should model this for kids by saying, "This is my current understanding." And if you learn something new that changes what you understand about a word you go back to them and say, "Now I have a deeper understanding."

Not knowing all there is to know is no reason not to begin!

You can also find opportunities to do SWI with your existing conventional teaching materials. One example is a worksheet which came in my recently purchased COVID distance learning Lower Elementary Digital Work Packet of Language Arts materials from Mandala Classroom Resources.

In that packet was a page called "Changing Words into Entry Words."

It explains that you must take off any suffixes to find the base in order to look a word up in the dictionary. She doesn't call them "bases" -- she calls them "entry words" -- but it is the same thing. I realized when looking at this paper that if we did reverse word sums for each word, the kids would automatically discover the Three English Suffixing Conventions!

Soooooo much more fun to discover them than just to be told them.

Note: We use the term "conventions" in SWI and not "rules." The conventions guide our spelling in English and a word will follow them unless there's a good reason not to (like to distinguish "dyeing" from "dying").

For adding a vowel suffix (a suffix which begins with a vowel, like -ed) sometimes there is no change to the base word. When there is a change, there are three conventions which govern that change. If the word ends with a single vowel followed by a single consonant, double the consonant. If the word ends with a single final nonsyllabic e, replace the < e > with the vowel suffix. If the word ends with a < y >, toggle the < y > to an < i >. The "Vowel Hand" is something that we show to kids. I learned it from Rebecca. Hold up your hand palm facing the class and tap the tip of each finger as you say a, e, i, o, u. And then draw the y on the palm of your hand. It will fall below the i, which helps kids remember that they can toggle back and forth.

Here are the reverse word sums that we did in our SWi session, and the spontaneous comments from the 7 year old little boy I did them with as he made the connections.

"the e gets switched out! the -ing trades with the e in the word"

"it actually switched into an i! it trades with the i"

"one of the p's takes themselves out. that's cool. the p doubles"

"I hope to get something for Christmas. I hope I don't get coal"

Here we see the consonant doubling, the toggling y to i, the replaceable e in action, and a few times when there is no change to the base word.

Of course, not every suffix begins with a vowel! You may notice that number 7 is NOT an example of a vowel suffix. If a syllable is not added when you pronounce the plural, it is just -s. So it shouldn't have been on the sheet.

Another not-quite-perfect-fit with this activity is that the instructions at the top of the page give the example of "knife would be the entry word for knives." I'm not sure why she chose to highlight that one in the instructions, since it doesn't follow the spelling conventions covered on the paper!

But if you do an investigation you will find that there is relationship between < f > and < v >. You will also find this relationship in other singular / plural noun pairings such as < wife > and < wives >, < sheaf > and < sheaves >, < loaf > and < loaves >. What do you think about noun / verb pairings such as < strife > and < strive >, and < life > and < live >. Are they related words? Get curious and see what you find out! Online Etymology Dictionary

The most fun thing about my Three Suffixing Conventions lesson was that the little boy mused aloud to himself while looking for patterns in the words, "It's got to be... because otherwise it wouldn't be logical." I love that studying our orthographic system correctly -- by examing the interconnectedness between phonology, morphology, and etymology -- has taught him that words are logical and English makes sense. Yes!!!!