Multiplication and Estimation with Lucky Beans

To help the child I was working with better understand Marshall's strategy for helping his mom estimate how many beans were in the big jar, I prepared my own estimation jar: a 12 oz honey jar filled with wheatberries. 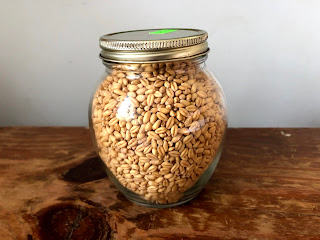 Zac was my helper for this activity, since my student is in California!  He is alway really excited to be a part of anything I do on Zoom, since he hasn't been able to have any school kids over to play since March.  And he had just helped me set up the crockpot in the Science Room to dye some white wool yarn with avocado, so he was eager to stay and do something else.

By the way, if you haven't done this, avocado skins & pits make a beautiful peachy-pink color. It is worth saving your pits. Just wash them clean and keep them in a container. I already save all of my onion skins for dyeing projects! So this is just one step farther down the plant dyeing rabbit hole... 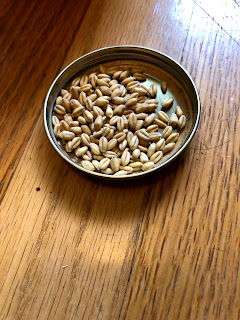 First we measured 1/2 tablespoon of wheatberries and counted them. 173 grains. Then we poured them into the cap of the jar for a visual of how they compared with the entire quantity. 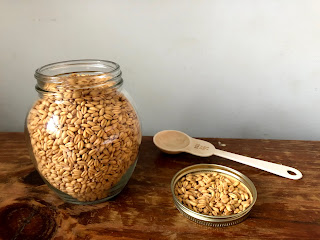 With this piece of knowledge, everyone made their first guess as so how many were in that jar. Zac came in highest with 86,000,600. My student was in the middle with 1,000,099. And I had the lowest guess. I made my guess by holding the jar lid against the side of the jar and moving it up, like I was taking a cross-section of the jar, and counting how many times the lid quantity would fit. I came up with an estimate of 8,000. 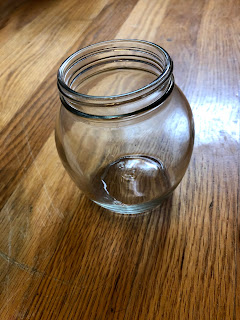 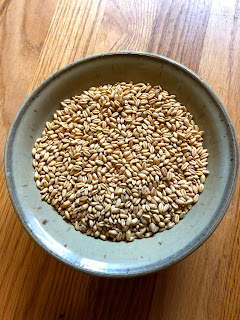 Next, it was time to empty out the honey jar entirely and move the wheatberries to a bowl, then use the 1/2 tablespoon measure to see how many 1/2 tablespoons of WATER fit in the honey jar. This was the strategy they used in the book, since they didn't have enough dried beans at home to fill up their container, but they were pretty sure they had a container that was the same size as the one in the contest. 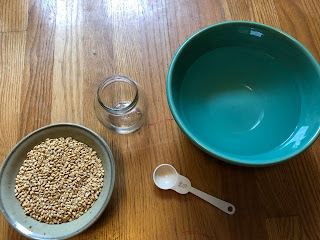 The answer to that was 47. (Actually, there are 48 half tablespoons in 12 oz, but I hadn't put the wheatberries quite up to the top.)

Then later in the day I calculated the actual number of wheatberries and came up with 7,912. Not bad!


Full Disclosure:
I didn't quite count every single wheatberry. I tried! I really did.  I thought, I'll just watch Survivor season 20 on Amazon Prime and count.

But after four episodes, I had only counted 4,000 grains and I was pretty sure that was only halfway. I don't mind giving myself a little luxury TV time when I'm weaving or knitting or patching clothes (or counting wheatberries), but I'm not willing to sit for eight hours like that.

So I got out the kitchen scale and measured the mass of my 4,000 wheatberries in grams. I got 163 grams. Then I poured in the portion that was uncounted, thinking it would be another 163 grams but it wasn't. It was 144 grams! Grrr.

So I measured 12 grams of wheatberries, counted them (326), and multiplied 326 by 12 to get an approximation of how many wheatberries were in that remaining 144 grams. That gave me 3,912.


Wheatberries are pretty tiny, so this would be easier with dried beans or kernels of unpopped popcorn for sure! I just didn't want to go to the grocery store to buy dried beans, so I tried to use what I had on hand. I would not recommend doing what I did, no matter how much you like Survivor!