It was so awesome to carve out this little bit of Mommy and Me time. Zac just turned three on May 23rd so this summer will serve as his introduction to "school" activities. Today's story was the Australian book Wombat Stew.

We had Picnic & Play from 10 am to noon. The first hour was free play and I had some children's music on in the background. We sang the "Dusty the Gnome" song as we tidied up. Then we learned and sang "Kookaburra," which I had in my Music for Little People CD set (CD 2, last track). Then we laid out my small sunflower quilt, which is the signal for circle time, and I had Zac go get his stuffed wombat from his bedroom. I told him our story would have a wombat in it. I also told him it was going to have a koala bear in it and showed him the furry koala bear picture from one of his books and also a small dish we have from Australia with a koala picture on it. He set the dish next to him so that the koala could hear the story too, which was sweet.

I read the story and then we started to gather our own supplies for Wombat Stew! We started indoors and used a three hole punch to punch some little circles from construction paper. Those would be the flies. Then, "flies" in hand, we went outside to Zac's new mud kitchen, which is a re-purposed bench my grandfather built to hold firewood, and got the rest of our things. 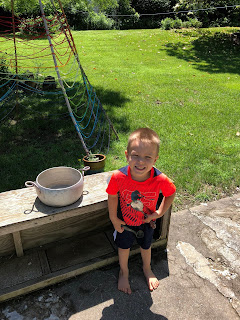 We got all of our pots and utensils ready, then went to the corner of the yard to the new digging pit (also a birthday present) and discovered that it was full of water from last night's rainstorm!  So Zac got water for our soup, plus some big dollops of mud. Then we added leftover pieces of craft feathers saved from other art projects, the "flies," water beads to be the "slugs," Halloween confetti spiders to be the "creepy-crawlies," and some handfuls of rocks to be the "gumnuts."

Zac stirred everything in the pot together vigorously. Then we pretended to be the dingo tasting the stew and crying, "YUCK!"  He thought that was hilarious so we did that over and over again.

Formal activity finished, I sat in the shade under a tree and admired how well my morning glory and moonflower seeds were coming up in their pots (the trick is so soak them overnight before planting).  I'm excited to see them cover our finger knitted yarn trellises on the bamboo tipi.  While I sat,  Zac played and played and played with the stew.  Pouring work is one of his favorite things in the world, so he was ecstatic to have a mud kitchen and a concoction to mess around with.  And he kept running back and forth to get more water from our sweet little digging pit.


Time to make some Wombat Stew! 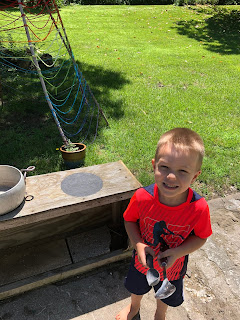 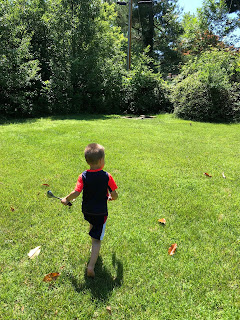 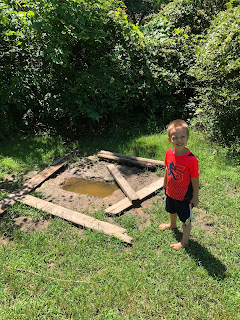 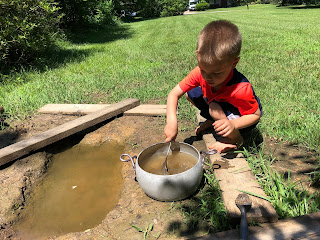 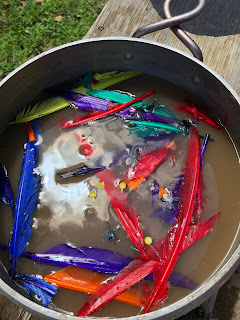 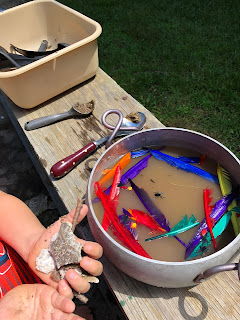 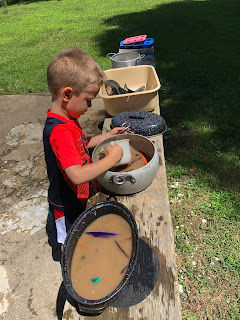 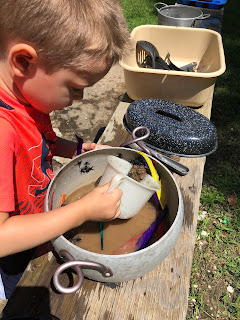 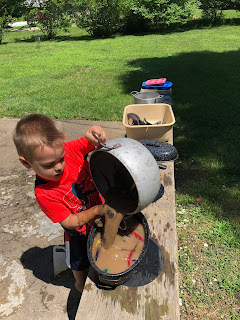 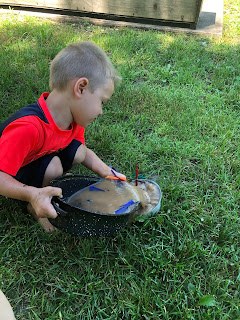 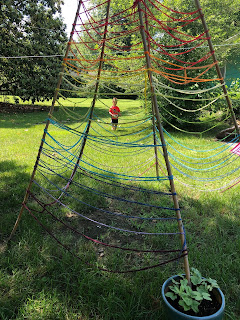 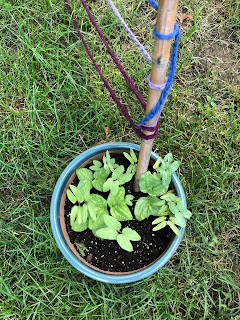