Picnic & Play: There's a Thief in My Garden

Here we are at the end of June!

We did our second circle from Movement Journeys and Circle Adventures: Movement Enrichment with a Therapeutic Approach for Early Childhood by Nancy Blanning and Laurie Clark. This is the yellow book, volume 1.

I chose "Rabbit's Adventure." This story requires you to set up a sort of obstacle course, either outdoors or indoors. We started with outdoors. You need a blue silk to represent a pond, a step or box they can jump off of, some wooden sticks to outline a zig zag path to hop along, a purple silk to represent the gooseberry patch, and a pole to represent the gate they have to squeeze under. It's based on the adventures of Peter Rabbit.

We had a great time outside doing this story! 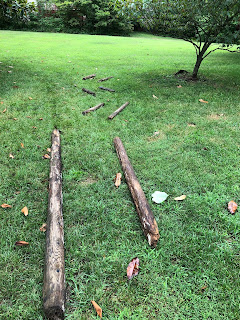 my zig zag path in the grass

Then we came back in and made a lovely Banana & Berry Hempseed Pudding with our blueberries and some raspberries. 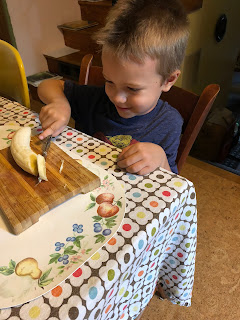 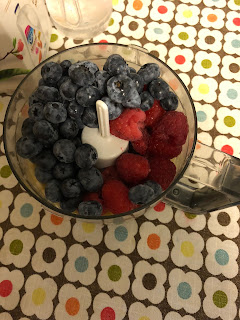 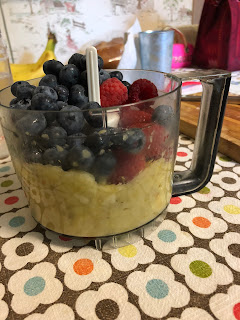 This kind of circle story is interesting to me, and I'd love to hear other people's take on it. I have read that you are supposed to introduce a circle gradually. So, at first I thought that we would pause halfway through the story and learn only the first part of it on day 1. Then I tried stopping it like that and Zac immediately complained... he could feel that the story was incomplete. If you're supposed to take a story challenge through to its resolution, it makes NO sense to just hop into Mr. MacGregor's garden and then say, ok, children, we will stop there for today. It just doesn't feel right.

So then I thought, ok, so we have to do the whole story on day 1, but maybe then we go and add in new pieces and expand it in certain parts each day. Keep developing the story until it feels like we've spent enough time on it and we are ready to move to a different story. But then you have a new problem... how do you know how much to add? What if you add too much and the story is just too huge? Obviously, you have to watch the children in their care and respond to them. But it's still an interesting question.

For my part, I added something onto Nancy Blanning's circle from the very start. I really liked one of the rabbit poems which Suzanne Down gives in her book of patterns for finger puppet animals (every single animal pattern includes poems plus puppetry suggestions) and so we did that as a verse before beginning the "Rabbit's Adventure" circle time story, with two rabbit finger puppets and a green flowered silk across my lap. It worked really nicely! If you have the book, it's the bottom rabbit poem on page 33.

We revisited "Rabbit's Adventure," this time doing the indoor version because it was extremely rainy! On this second time through I also added something into the original version, which was a lullaby for the end. I chose "Quiet Moments," track 28 on Shea Darian's CD, page 109 of her book.

I can absolutely see going further with the "Rabbit's Adventure" story and adding in a few more finger plays for the vegetables or maybe a bird he hears in the garden... but because it had been SO TREMENDOUSLY RAINY here in the Midwest, Wednesday morning just called out for a Mud story! So we did "The Muddy Farmyard" from Nell Smyth's The Breathing Circle: Learning Through the Movement of the Natural Breath, pages 126-127.

This is a rich story which invites all kinds of sensory exploration. I also like that many of her stories are therapeutic storytelling. This one is about the joy of being yourself, regardless of the judgments of others. She also gives suggestions for how to tell the story as well as follow up activities. Zac and I have done it several times and still not even gotten to the bread baking, play dough, or watercolor painting suggestions she gives. We just keep doing MUD play! The first time we did it, I had no props of any kind. We just read the story and headed out to the digging pit and the mud kitchen. The second time I told it with the silks, wooden stable, and wooden animals, plus I gave the children rainsticks so that they could help add to the raining sounds.

For this telling, I continued to use the props of the silks / stable / wooden animals / rainsticks... PLUS I set out four frog drums in different sizes. After we finished the story everyone played the rain sticks and frog drums together and it was soooo pretty and so much fun!

Note: If you want a really big rainstick, I suggest the Large Cactus Rainstick from Music in Motion. It is $35.00. It takes a long time to arrive from Chile but it's 40 inches long and sounds amazing.

We've also done the "Puddles" activity from pages 100-101 of The Children's Music Studio: A Reggio-inspired Approach every time we've done this story.

This time, for the first time, the two little boys wanted to dance with their strings when the movement game was done. And so the other mother and I sat and played instruments for them and they twirled and jumped around happily. All of a sudden I remembered that I had three silk rainbow ribbon streamers from way back when my daughters were little!

We looked out the window and, magically, the rain had stopped! We grabbed the rainbow streamers and went outside, all of the adults and children running barefoot and splashing and splooshing in the ankle-deep still-warm puddles in the grass. We ran through the field with the rainbow streamers flowing behind us, being the rainbows after the storm. It was fantastic! 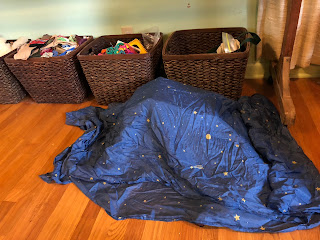 our stable, silks, animals, and instruments
"sleeping" under a starry silk before the storytelling begins 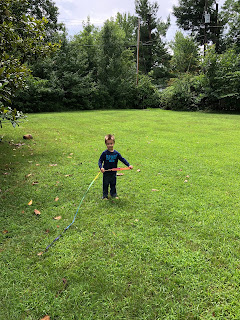 passing out the rainbow ribbon streamers 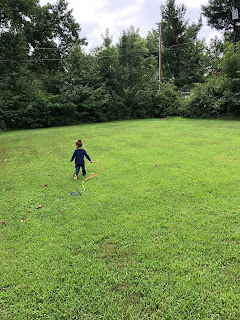 running joyfully through the grass and puddles 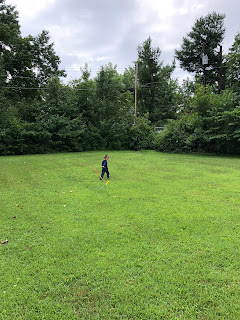 After taking Thursday off, we went to two playdates on Friday. One was at Boulder & Bloom, a wonderful new Waldorf-inspired early childhood program which is starting up in our town. Very exciting! The other was at a friend's house. That family has a sweet little vegetable garden and we nibbled on fresh cilantro and ate warm sun-ripened cherry tomatoes off the vine. We also tasted leaves of fresh lettuce right out of the garden. So then...

We finished the week with a story from Suzanne Down's book of Summer Tales. This story is called "There's a Thief in My Garden" and it's all about snails and lettuce. Don't worry... it has a happy ending!

This is an example of a story which could easily be made into a circle. Suzanne already provides several verses with it. You could add in some puppetry for the Froggy Boggy verse, something for the ladybug or wildflower, a verse and movement for the moon coming up, something for the snail munching, a movement for the snapping off and on of the flashlight, falling asleep on the garden path, waking up and stretching in the morning, skipping over the creek bridge, and a snail poem to end the story. Lunch with a salad of fresh lettuces is the perfect complement!

If anyone out there is in the process of creating their own Waldorf circles from stories, or expanding circles written by others and trying to decide how complicated to make them and when enough is enough... please do share!