I was talking with a friend today who worked in an Waldorf early childhood environment for years, and I was describing how hard it is for me to step away from my "read the children a picture book" roots and have ME and what I'm saying and doing just BE the story, and she was saying that of course it wouldn't have a picture book in it and she would never think that a circle time would. What's strange for me is no big deal and completely natural for her. It's funny how hard it can be to let go of pre-conceived notions like that. It's such a simple boundary -- tell and act out the story -- but it was so hard for me to cross.

But today I did my first "real" Waldorf circle with Zac!

If you're like me and you aren't sure how it would go to do an Early Childhood circle, I highly recommend the two Movement Journeys and Circle Adventures: Movement Enrichment with a Therapeutic Approach for Early Childhood books by Nancy Blanning and Laurie Clark. They spell it out for you step by step, not including whatever opening and closing songs you want for your circle. I found my opening songs from Shea Darian's CD but am still stuck on a closing song. I can feel the need for it but I can't decide what I want. So if someone has a nice closing they'd like to share, please do!

We worked with the Springtime Garden Circle today (pages 84-85). I can totally see Zac wanting to do this over and over again for several days in a row and memorizing all the movements and words to the songs. He loves having Waldorf songs on his iPod for naptime and is starting to spontaneously sing them at mealtimes and when he's playing. It is so sweet! (I loaded the iPod with the two CDs for Let Us Form a Ring, the CD for This is the Way We Wash-a-Day, and the CD for Seven Times the Sun).

Here is what we did:

#4 - I told Zac that today we were going to learn about seeds and that farmers plant seeds so that plants will grow (like at the blueberry farm and lavender farm and the other farms we've been spending time at lately) and I asked him if he knew what seeds looked like and he said no.

#5 - Then we started the Springtime Garden Circle from the first book. I skipped page 83 and went straight to the "Little Robin Redbreast" verse and finger play at the top of page 84. We skipped the Little Gnomes song and walking in the spiral and substituted "Johnny Hammers with One Hammer" except that I changed it to "Gnomes Hammer with One Hammer." We did the rest of pages 83 and 84 as Laurie Clark describes. He liked the developmental exercises for Fish and Inchworm a lot!

#6 - Then we looked at the seeds for what we were going to plant, which is Blue Miniature Ornamental Corn. The seeds are tinted blue and are tiny and adorable. He was fascinated and kept pouring them in and out of the envelope and holding them in his hands. I wanted him to see me open the package but next time I think I'll just have them in a little dish.

I'm limiting my gardening heavily this year, because I have a habit of making grand plans and over-committing. I write all these detailed plans on graph paper complete with a scale and a compass rose and put things in the ground and then we go away for several weeks in July and nothing gets weeded or watered and I come home to a mess and spend the rest of the growing and harvesting season being very mean to myself about how I can't garden and it disrespects my grandfather's memory. It's hard taking over the grounds maintenance when the person before you was a Botany professor!

Anyone else have this problem and, if so, what did you edit your planting list down to?

This year, this is what I'm limiting myself to:

In the tiny Butterfly Garden, milkweed only.

In the pots which support the Finger-Knitted Tipi, morning glory and moonflower only (by the way, there's also a song for morning glories called "Good Morning Glory!" on the This Is the Way We Wash-a-Day CD, track 51).

In the Coldframe which Becca built (there is no lid on it right now because a child stood on it when it was covered with snow this winter... so now it's just a small clearly-defined space which Zac will understand not to walk in) the blue miniature ornamental corn.

And in the actual Vegetable Garden I'm only planting HALF of it and I'm going with two things only. Sunflowers and pumpkins.

We are planting miniature corn but Sharon Lovejoy says in her wonderful Roots, Shoots, Buckets & Boots: Gardening Together with Children on page 62 that you can plant regular corn closely together and it will develop miniature ears. "Sow the corn 6 inches apart in this square, placing each seed in a 4-inch-deep hole. When planted close together in flat ground, instead of a mound... corn develops tiny, tender ears." So you can take regular corn seeds and miniaturize them!

Sharon Lovejoy also has a great list of the Top 20 Plants for Kids which is worth checking out.

We ended the day by going to a graduation party and cookout at a beautiful farm pond and Zac and I got in the paddle boat and paddled all around. He thought steering with the rudder was really fun. It was a potluck and we took a bread pudding and the last of our freshly-picked blueberries. So we will probably need to make another trip to Lost Creek Blueberries soon! 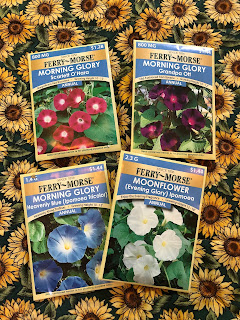 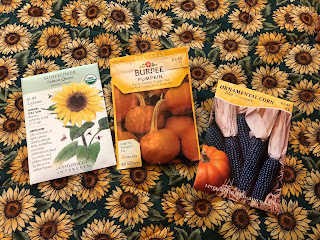 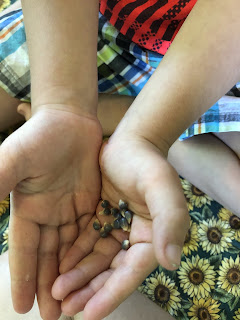 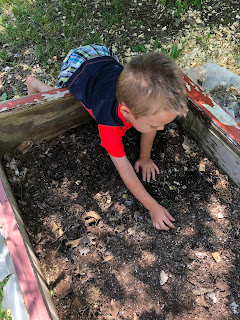 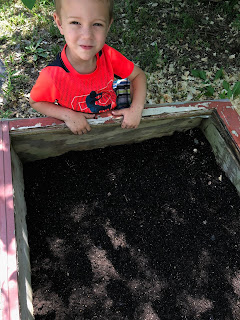 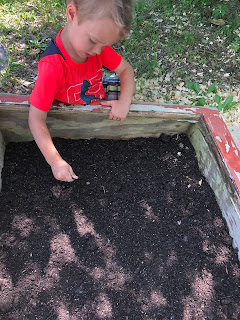 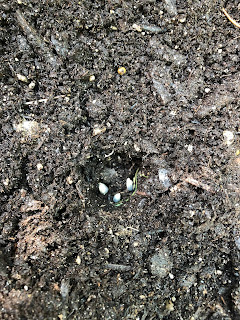 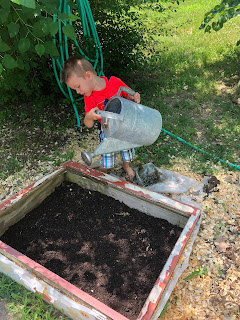 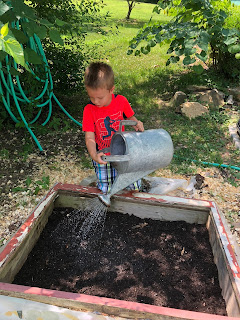 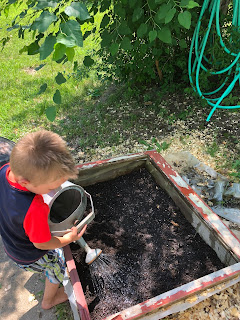