Zac -- who turns 5 tomorrow -- wanted an Ant Farm for his birthday. Today the ants arrived, so we set it up! Lots of people write lots of conflicting reviews on Amazon for different ant farms, and lots of people have advice about how to put the ants in them, so I will share here what worked for us.

We had a gel ant farm once in my classroom at Tidewater (I'll post a picture of Leah's ant farm painting when I find it), but this time I went with sand.

I like the idea of sand better than gel because you can clean the habitat and put in fresh sand and reuse it after your first round of ants dies off. Plus you get to feed the ants, and giving animals food and water is part of caretaking!

Doing this in Spring or Autumn is best, because of the temperature restrictions on shipping live ants. It's also easier to find playground sand when it's not Winter. So I wouldn't suggest this is a a Christmas gift.

I carefully read all of the ant reviews, as well as the reviews for the sand habitat I chose, and kept the ants in the fridge until they weren't moving. For me, that was 35 minutes. They don't have much mass so they warm up quickly, and when I brought them out and checked them at 20 minutes they got so warm they woke up completely and thus the second 15 minutes.

The paper that comes with the ant farm says you can't refrigerate them for more than 10 minutes or they'll die, but the information for the ants says that you can keep them in the fridge for up to four days. So you decide!

Having read and re-read all of the reviews, I saw so many mentions of stings and ants escaping, I came up with a MASTER PLAN. I placed the ant farm in the BATHTUB before I opened the vial to tip them into the paper funnel.

I also wore thick leather gardening gloves (which I would recommend).

Everything everyone says about them crawling up the paper funnel is true. Also, they wake up at different times. There's definitely a delay between the first ant starting to stir and climbing out of the vial and the last.

I made the paper funnel long and tall and jammed it all the way down (making sure it was wide enough at the narrow end that they could still get through it) and even put tape on the side so it would keep its shape. But having to bounce the funnel up and down to knock down the ants that were climbing up destroyed the opening at the narrow end, and they couldn't get out it anymore. So it didn't really work out!

I would not do this on your kitchen table. You will definitely get angry stinging ants everywhere.

In messing around with the funnel I noted that the few ants that fell into the tub couldn't climb its walls. So I felt safe (and, besides, should things really go south I could always turn on the bathtub faucet and dispose of them in an epic flood... but they couldn't climb the walls and that wasn't necessary).

Ultimately I dispensed with the paper funnel idea and had my leather gloves and the vial and the ant-farm-in-bathtub setup, and just took off the cap and tipped and tapped them straight into the habitat opening.

The ants that fell outside the habitat ran around my bathtub merrily and I scooped them up one at a time at my leisure using the tip of the vial, and then tapped them from the vial into the opening. Every once in a while I would switch to a different opening, so that they were dispersed evenly. I always kept the other two openings firmly shut.

Having them run around harmlessly was easy. I could take my time and my almost-five year old could stand outside the tub and watch from a safe distance. I don't know if everyone's bathtub would work as well, but I thought I'd pass the suggestion along. For us, it was definitely a success! 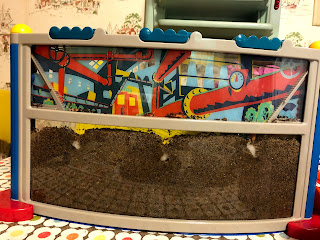 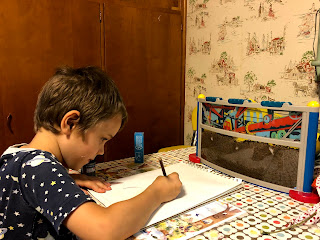 making notes in his sketchpad 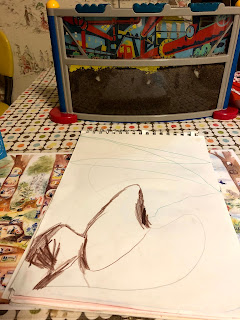 April 2021 - refilled the ant farm with fresh sand and refill ants and all went well.

Two bags of "ant farm sant" from NatureGifts.com is the right amount for this farm. I would suggest pushing the small plugs of cotton in place (as it had when it was new) before flipping it over to refill it, or the sand will go all the way to the upper part of the farm and it makes it hard to judge when to stop filling it. If the sand level is too high it is harder for them to build tunnels. I lost the little skewer but a size 6 knitting needle worked perfectly.

This time I kept the ants in the fridge for much longer and they not only survived the experience but not a single one woke up while I was adding them to the ant farm... a definite plus! I kept them in the fridge from 3 pm to 10:15 pm. I still wore my leather gloves and put the ant farm in the bathtub, just in case.

Digital Books to Use on Zoom for SWI

You tell I'm on vacation! Posts and posts of lists. I'm trying hard to keep my mind clear and relaxed, so I'm writing things d...