Thursday was my first experience with teaching the concept of pi and I think I did a pretty decent job. So I would like to share what we did and I welcome comments or additional ideas. First, pi is a homophone so we went over the difference between 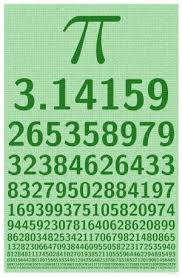 By the way, here's the link to download the above poster as a FREE pdf. You can also purchase it for $49.95.


(As a side note, can you believe that we is now actually a homophone? I had students last week spell it Wii.)

Again, I demonstrated this with my yoga mat, measured, and cut the string. I held up the two strings, side by side. Then I told students that Archimedes was obsessed with finding out whether there was a rule or a pattern for the relationship between the circumference of a circle and its diameter. In order to figure this out, he had to measure the circumference and diameter of every circle he could find. I went through the classroom and showed some examples of things which were circles or cylinders that could be measured (spheres are too hard). And I gave each child some string and a ruler and they all went off to choose a circle and get the two measurements. The room was completely silent for about ten minutes. Students were totally engrossed in this work. Finally, I called them all back to the floor and asked them to bring the two pieces of string. We laid all the data sets out on a carpet to see them side by side. Sure, enough, when you look at them, it's clear as day. No matter HOW BIG or HOW SMALL the circle is, the two measurements have the same relationship. I don't mind telling you, it completely blew my mind. It's one thing to know it is going to happen -- it's quite another to see it for yourself.

First, I asked students what they noticed. Someone pointed out that each person had measured a different circle so all the strings were different lengths. I asked which was always longer, circumference or diameter? Circumference, they said. That's right -- and I demonstrated by walking in a large circle around two of the classroom tables which had been pushed together and then moving them slightly apart and taking the shortcut right through the middle. Which way is longer, all the way around or the shortcut? Of course, the shortcut is the shorter way.

Then I showed the students that not only is the diameter shorter but it is always about 1/3 of the circumference. You can see this if you pick up your short string and see how many times you would have to lay it end to end in order to match the length of your long string. It takes three lengths of the diameter to equal the circumference. Then I wrote on the board, diameter x 3

(approximately equals) circumference. We did some practice problems. If I tell you that the diameter of my circle is two feet, can you guess what its circumference would be? (About 6 feet) And so on.

Finally, I told them that Archimedes figured out that it wasn't exactly 3, it was 3.14159 blah blah blah (you can find the first hundred digits of pi online and read it to them if you don't have the poster to help demonstrate your point). I told them that the number goes on forever. And since when mathematicians are talking to each other, they don't want to say 3.14159 blah blah blah... we all agree that this mathematical symbol will stand for that number. And I wrote on the board: diameter x pi = circumference.

That's it! End of lesson.

If you ever wanted to see the first 4 million digits of pi, click on the image above...
Posted by Renee at 2:30 PM