SWI Investigations of < prime > and < fraction >

Last week in SWI we worked some more with the concept of morphological relatives, ie. relatives which share a base. The question was, Are these words related to < nature >? By related, we meant that when you put them in a word sum, they would share the same base as < nature >. 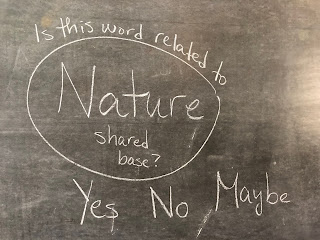 The children worked in small groups to sort the index cards I gave them into piles: Yes, No, or Maybe. The words on the cards were 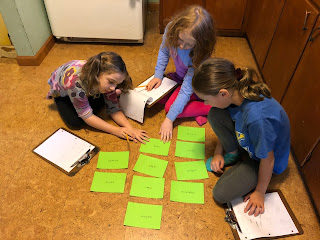 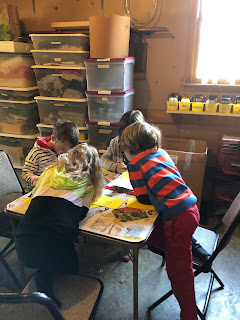 Right away the groups knew that < trees > and < rabbit > are not related to < nature >. They share a meaning relationship but not a structural one.

< Signature > is tricky, because it appears to contain the word < nature > in it. However, < sign > is the base of < signature >. The related words all share the base < nate > and come from a shared root (the Latin word natus which means "born"). Spelling carries the meaning, and these words all have a meaning related to birth. 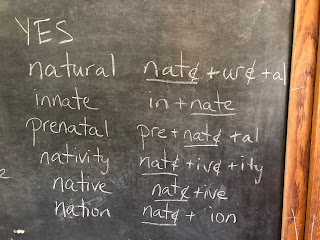 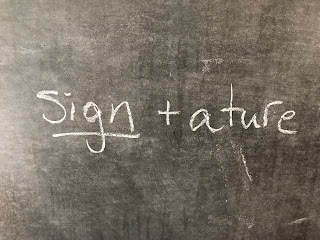 Because the spelling carries the meaning, the first step in SWI is to make sure you know the meaning of each word! Otherwise, you will miss seeing the connections! 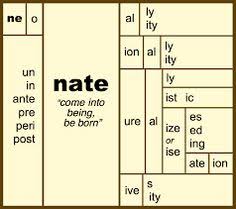 This week's lesson delved deeper into morphological relatives vs. etymological relatives, making word sums, and arranging the base plus all possible prefixes and suffixes into a matrix form. These matrices are especially helpful for dyslexic students but are helpful for all learners!

I used two cards from Truer Words Volume 3, the wonderful resource by Emily O'Connor from Advantage Math Clinic in Portland OR. I met Emily at a SWI conference in Ohio (Etymology Seven with Gina Cooke and Doug Harper). Emily was the original SWI teacher at the Portland Waldorf School, and we were able to discuss intersections between these two educational philosophies. The Truer Words Volume 4 just came out... and I preordered it of course. It just arrived at my house a few days ago. So, at the end of our lesson we were able to open it up and see what words it included.

These cards feature a "spelling list" of words on the front, arranged with a botanical illustration of a plant which not only has something in meaning/name to do with the words studied, but also matches in form the arrangement of the word with its morphological and etymological relatives.

Emily is dyslexic and she told me that this is how she sees and understands the patterns in and between words. They are beautiful!!!!

We did the words < prime > and < fraction >, both related to the Fractions block which the Cheese Puffs are doing (yes, they changed the name of their team from Red Pandas to Cheese Puffs). < Prime > was actually a good concept for the Baby Wolves to study too, because they've been practicing skip counting, and it ended up tying into their Quality of Numbers block in a surprising way!

Then we considered morphological relatives of < prime >. Emily had given us some on her card. We went over them and what they meant:

These have a shared base of < prime > which comes from the Latin primus. They all carry a sense of being first.

Then we looked at other words on her card (illustrated with the evening primrose, by the way) which have the same Latin root but are not morphological relatives. In other words, they share a root but not a base: 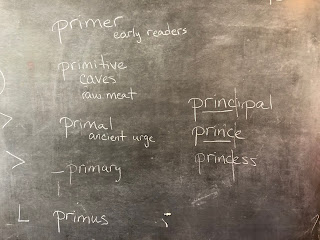 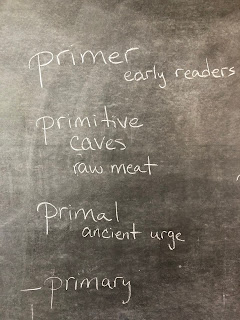 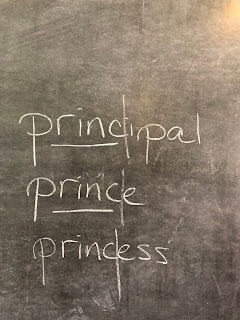 We also found < prim >, which reminded us of Miss Prim in the skip counting verses of the Quality of Numbers block! She counts by 1's, doesn't she? 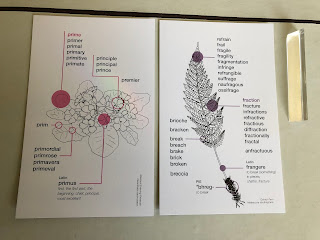 There are more, like < primordial > (the concept of the primordial soup tying in with Science Club; ALL learning is full of connections!) but I wanted them to have a chance to try to make a matrix. I do like how Emily includes a matrix for the base on the back of the card, so it gave the kids an example to see. But we wanted to make our own. It was time to study < fraction >. 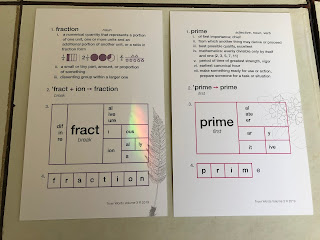 The other two words we discussed were < fracture > and < refract >. The children were easily able to see the shared meaning of "break" in these words. Then it was word sum time:

Once they had their word sums sorted out, we put the base < fract > on a sticky note and made a sticky note in front for the prefixes and a sticky note behind for the suffixes. Voila! An easy way to make a matrix.

I was thrilled to have < refract > as one of our words, and we spent some time looking at prisms and the rainbows they create when they break up white light, because the Baby Wolves were just that very afternoon going to be doing the number 7 and the 7 colors of the rainbow. It was completely fortuitous, and such a phenomenal connection! Then, when I went to photograph the < fraction > card for this blog post, the sun was shining through the crystal which hangs above the Nature table, and there was a rainbow on the card. I mean, teaching just doesn't get any better than that. 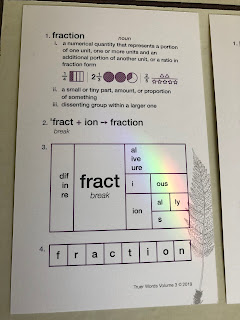