SWI Investigations of < numerator > and < denominator >

I just found a podcast which I highly recommend if you're still trying to wrap your mind around Structured Word Inquiry! The Science of Spelling with Pete Bowers, PhD (The Exceptional Educator, Ep. 3)

I did ten online Zoom sessions with Pete before I started teaching SWI (and I saw Shawna teach it for two years) and I was still scared to try it! But once you dive in, it becomes as easy as breathing. As adults we've been told our whole lives that English is awful and spelling it is impossible and full of pitfalls... it is so hard to adjust to the belief that it is actually LOGICAL and the WHOLE THING MAKES SENSE.

Happily, it is much easier for our children to accept than it is for us.

They don't have nearly so much un-learning to struggle with!

Friday's session was < numerator > and < denominator >. In my classroom we just finished Quality of Numbers with the 6-9 group and Fractions with the 9-12 group (the Baby Wolves and the Cheese Puffs, respectively). These words tied in to both blocks!

I started with what do these words mean, the essential first step in SWI since the spelling carries the meaning.

I wrote 1/2 on the board and next to the numerator I wrote "how many."

The second step in SWI is to look at the word's structure. We looked at the words < numerator > and < denominator > and noticed that it looked like they had a shared suffix, so we stripped that off. That left us with < numer > and < denomin >. So, I asked them, can you think of any other words that might be built off of the same base < numer >? And, of course, they have to have a shared meaning related to "how many."

The children who are least successful at this are those who still think of "word families" as words that rhyme with each other. This is a fallacy taught in schools. Word families are words that are morphologically related, ie. they share a base. < Numer > is related to lots of words but NOT < tumor > and NOT < rumor >.

The kids came up with < numeral > and < numerical > and < numerous > and they asked me about < number >, so we wrote it up with a question mark. I told them about < enumerate >, which I do all the time when I write up a long to do list on the chalkboard on a Friday (and as I had on that very Friday), when I'm trying to make sure everything gets checked off. They were easily able to recognize and remove the prefix and to see the meaning connection. It's how many things I have to do!

Numer is a bound base, since it cannot appear without an affix.

And, at the last minute, a child looked over to my display on the Nature table of the Land of Numeria (where Plantain and Calendula ended up when they solved all the riddles and the small shy mole took them into the mountain) and she exclaimed, < Numeria >! Yes, indeed, the world of Math Gnomes and counting gems is what is coming next. 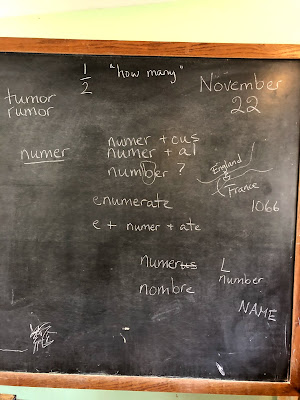 Step three is history and relatives. We went to etymonline, Doug Harper's wonderful site (first a hobby site on geocities, now an etymology dictionary widely used around the world), and looked up < numerator >. We found that numerator is a Latin word related to the verb numerare "to count, number" and the noun numerus "a number."

We were also directed to the entry for < number > where we had a quick history lesson. I had to put a sketch of England, France, and the English Channel on the board, plus write 1066. Why? The Battle of Hastings.

The children were interested in the Battle of Hastings so I think we will have to do it in our next session (I did tell them that it really boils down to a hill, which is true). Doug says that the French treated English like a rental car. They dinged it and banged it into things and beat the heck out of it. I don't know about all that but he's the expert! And they do certainly love putting b's in things. We saw that the word < number > comes from Old French nombre and directly from Latin numerus "a number, quantity." So < numer > and < number > are cousins.

Interestingly, a student pointed out that nombre is now Spanish for "name."

Turning to < denomin >, which was left without a suffix on the board, we decided to strip off the prefix < de > as well, which left a naked < nomin >. This, you can see, is also a bound base. < Nomin > is not a word in English all on its own. It has to have an affix to appear. A base which is also a word on its own is called a free base. < Nate > is a bound base and part of the word < nature >; < ground > is a free base and can be on its own or part of words like < grounded > and < underground > and so on.

So, we considered words that might be built off of < nomin > and might be related to the sense of < denominator > which is "what kind." When you look in the box of Cut-Out Labeled Fraction Circles, you are looking for the section that has the denominator you want. It is more like the name of the fraction; it certainly does not indicate a quantity (a mistake that children who are new to fractions make when adding or subtracting, unless they are introduced to this properly).

< Nominate > came up, where you suggest a list of names. We couldn't think of any others, which is okay. Now that I'm writing this, I'm thinking of < nominal >. 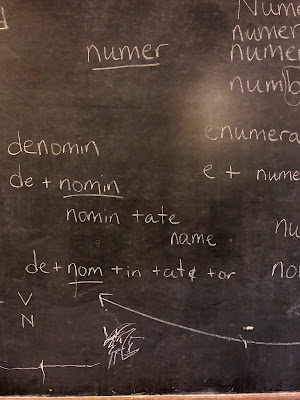 And < ator > is not really a suffix on its own but two combined, and so the word sum should be de + nomin + ate/ + or. I had wondered if the < in > in < nomin > was a suffix, but decided it was not. It was okay to get that wrong in front of the children. Pete says that we should not be worried about getting one of the finer points wrong. You simply say, this is my current understanding. And then you go back and say, I now have a better understanding. It models life long learning, which is no big deal. If you wait to begin SWI until you are a PhD level etymologist, like Gina Cooke, your children will be going without any good spelling instruction for a long time! No matter what, you are giving the children better information than they were getting before (such as, "when two vowels go walking the first one says the talking" ... I'm sorry ... not in "break or "piece" or lots of other words).

We looked up < denominator > and found that it came from a Latin verb nominare, "to name." Farther back in time, it came from PIE *no-men which meant "name" and, if you click the link, is related to all kinds of modern day words! I love to click the PIE links. These, of course, are etymological relatives and not morphological ones. They share an ancient relative but not a modern day spelling pattern. However, we saw that < nomen > is a cousin to < nomin > and that immediately made me think of the beloved Montessori term for vocabulary: nomenclature!

Having thoroughly and beyond the shadow of a doubt estabished that the numerator of a fraction meant "how many" and was related to "number" and the denominator of a fraction meant "what kind" and was related to "name," we were done for the day. There is a step four, which is pronunciation (the sounds being the least important aspect to the spelling of a word in English), but nothing in either of these words was notable prounciation-wise. 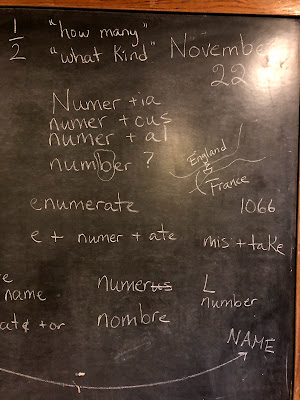 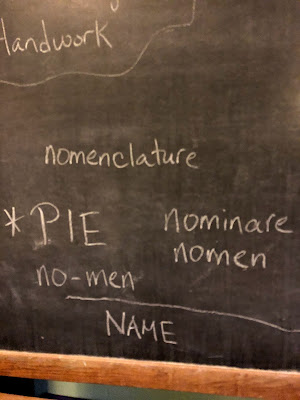 Pete coined the term SWI and articulated the four steps of this mode of inquiry, applying the scientific method to our orthography system, and I and many others owe him a great debt! He's a wonderful teacher to both children and adults. I encourage you to visit his website, wordwordskingston.com, to keep track of future courses and publications.